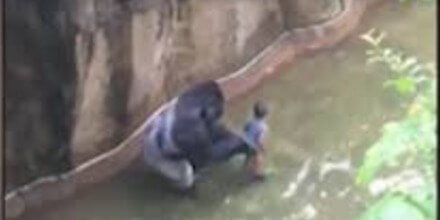 I was a child who grew up in the 1970s.  We were of the Hanna-Barbera cartoon generation and we remember the theme songs well.  They are ingrained in us, like this one:

“We’ve got a gorilla for sale

Won’t you buy him,
Take him home and try him,
Gorilla for sale.

Don’t you want a little gorilla you can call your own,
A gorilla who’ll be with ya when you’re all alone?

How much is that gorilla in the window?

At any price,
A gorilla like Magilla is mighty nice.
Gorilla, Magilla Gorilla for sale.”

Who among us wished that we could jump right in to that cartoon: just inside the display window of Mr. Peeble’s store, to spend some time with good ol’ Magilla Gorilla?  As children of the 70s, we inhaled our parents’ second-hand cigarette smoke, we rode in open pick-up truck beds, we didn’t wear seatbelts or bicycle helmets, we drank directly from the garden hose (for me, it was NJ well water….I’m lucky to still be alive).  We embraced danger; but, deep down inside we knew that Magilla was just a cartoon and that gorillas did not make good pets or playmates.  And, in case we were reckless and tried to jump in with the gorillas, or other dangerous animals, our parents would have stopped us.  Of that, I’m sure.  We were reckless, but we had each others’ back.  Those were the ‘70s.

Decades later, enter Harambe: a gorilla on display at the Cincinnati Zoo.  Lacking the suspenders, hat, and banana supply of Magilla, Harambe had that Magilla-esque appeal to a certain young visitor who got too close to the barrier and fell about 15 feet into the gorilla habitat.  The other gorillas were quickly ushered out of the exhibit, but one remained: Harambe.  Did Harambe stay behind because he was more curious, because he was a protector, or because he was intent on causing harm?  We’ll never know.

This news story has caught a lot of attention; and by now we’ve all seen the gripping video footage of the boy who fell into the gorilla cage; at one point even appearing to hold hands with the giant. The video hit us all squarely in the gut: Every parent who watched that video had their stomach sink down to about their toes.  Every animal lover who watched the video had their stomach churn in disgust when they learned what happened once the video footage stopped rolling and the giant, seemingly gentle beast was felled by the bullet of a sniper.  As for me, when I saw the video, my first reaction -after gut-wrenching fear as a parent- was: the gorilla sure does seem to be gentle with the kid; as though he’s protecting him. Yes, it’s a shame the gorilla had to be put down.

In the end, the zoo did the right thing by putting the animal down and mitigating the risks. They claim that the tranquilizer gun would have not worked instantaneously and the gorilla could have been aggravated by a tranquilizer shot; putting the child in an even more dangerous scenario than he was already in. Human life is always more valuable than the life of anything else…yes, even an endangered species. Human life can be stupid; it can be selfish; it can lack foresight or attention…but it has a soul.  It’s therefore precious and worthy of being saved first.

Since the killing, I have seen extremely vile posts about the parents of this boy. Yes, the parents should have kept a better eye on the child. They were reckless. As the father of 8 children, I’ve had to have eyes like a hawk, coupled with the ability to count to 8 quickly and repetitively.  There is nothing more harrowing than “recreational time” with the kids at dangerous spots.  I’m the guy who was nervous near the edge of the Grand Canyon, as we snapped those heirloom photos.  I’m the guy who loves a rope bridge when I’m on it alone; but I hate the bridge when my kids are on it.  And yes, at the zoo, I’m also “that guy.”  Absolutely, the parents undoubtedly screwed up with a lapse of attention and focus to what matters most: the child.

At the same time, there should NEVER be exhibits designed to the extent that toddlers and young children can simply fall into them. That’s simply ultra-reckless; an invitation for disaster waiting to happen (that invitation was accepted). I am sure that many more animals will be saved based on case studies that come as a result of Harambe being terminated; and, to that extent, his death will not be without purpose.  Exhibits need to be idiot-proofed.  Why?….because idiots visit them.

Today, life will go on for us who have strong opinions. Unborn sea turtles will remain protected; and, approximately 33 unborn children will die where I live -in Broward County, Florida- as the result of successful women’s health medical procedures. Nobody will care; but, they’ll continue to care about Harambe. Another thing that will happen is this: folks will remain angry that this gorilla is dead while the parents who failed to be attentive to their child, allowing him to fall into the exhibit, are allowed to live. That’s the way it is.  It’s 2016.

Harambe literally means “to pull together” in Swahili.  It’s ironic how much his death has pulled us apart.  I’m hoping that we can “harambe” around zoo safety at a time when folks will undoubtedly be calling for the end of zoos; just as they have called for an end of life for certain inattentive parents.  Human life always matters the most.  Until we realize that, we are the animals, on exhibit for each other.