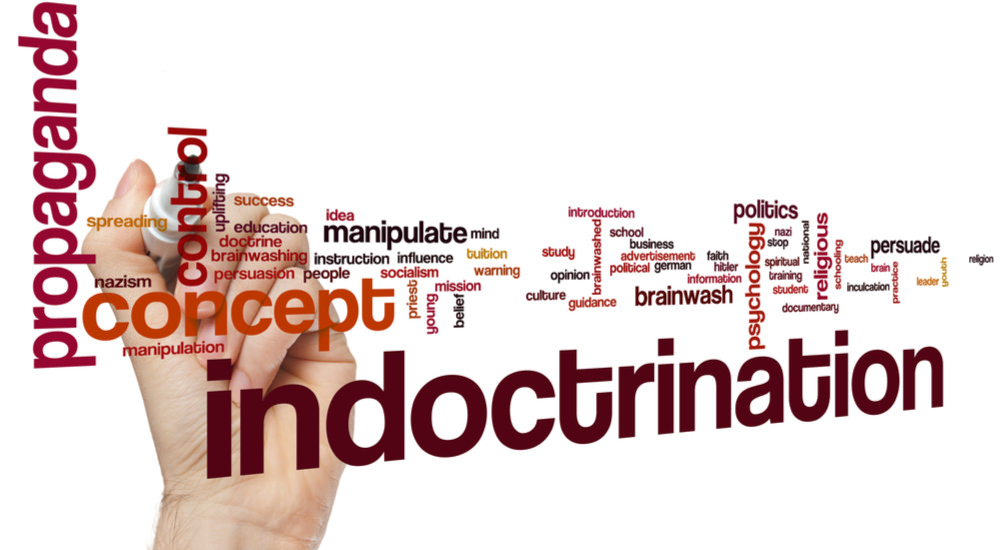 Nikita S. Krushchev said, “Comrades! We must abolish the cult of the individual decisively, once and for all.”

Vladmir Ilyich Lenin said, “Give me four years to teach the children and the seed I have sown will never be uprooted.”

The teachings of the Left include discrediting the Bible and replacing religion with social justice, dishonoring America and family, controlling the schools and curricula, and normalizing promiscuity. The Left has set about “deconstructing” (breaking down) the child’s psychology, removing every facet of life that provides the sense of security needed to create a mature, stable, responsible, independent, confident, and productive adult who will contribute to a free society. And it is through today’s schools that they are deconstructing our children in order to destroy the free society.

And now, another assault against the children has appeared in the offing, perhaps the most egregious. A mandate that first became evident in some English schools several years ago, now seen in some Canadian and American schools, is that children should be discouraged from having “best friends.”  England’s Thomas’s Battersea school has determined, with the agreement of some (but by no means all) parents and psychologists, that group bonding would encourage inclusion of all children and prevent rejection of the few.

The strength one gets from a best-friend relationship, if removed, may be sufficient to create enough despair where the individual will seek comfort in an ever-expanding government (the Marxist purpose). As with any detrimental Leftist concept, this technique is couched as an appeal for sympathy and compassion for those who are slow to bond with a best friend, but its stealth purpose is a means of assuring equalization by removing the securities of friendship.

Of course, not all children will immediately develop warm friendships, but should that be the norm to impose on others? Our schools have already lowered standards to meet the levels of lower achievers.  Should we also remove music and the arts with deference to the less gifted, or impose a veritable “eye for an eye” on behalf of those with poorer vision?  Would not our population be better served by a sensitive teacher to help all the children overcome their timidity and fears, learn the art of conversation, and develop the social graces needed to negotiate their future?  For school personnel to reduce every student to his or her lowest common denominator is a Marxist technique.  Already implemented in grading, it guarantees equality to the masses with obedience to the authorities, and where equality is imposed, freedoms are sacrificed.

There are many quotes about the value of friends, four of which I thought prudent to include here:

“When it hurts to look back, and you’re scared to look ahead, you can look beside you and your best friend will be there” – Anonymous.

“My best friend is the one who brings out the best in me” – Henry Ford.

“Things are never quite as scary when you’ve got a best friend” – Bill Watterson.

“A blessed thing it is for any man or woman to have a friend, one human soul whom we can trust utterly, who knows the best and worst of us, and who loves us in spite of all our faults” – Charles Kingsley.

The benefits of friendship are many and unique.  We are social beings and friends fill a psychological need for survival, to cope with life’s trials and to remain inspired.  A friend is an eager companion, one who provides praise and kindly given criticism, and a way for us to learn trust and support.  Friends are there for comfort and to teach us about respect, sharing, thought, discussion and debate, analysis and problem-solving; simply put, they bring us happiness. Vital for our emotional wellbeing, best friends provide what parents and teachers cannot, particularly because the adults are less than perfect or may have, themselves, been deprived of best friends.

The lack of close friends results in emotional distress – loneliness, sadness, emptiness, withdrawal – which can also take its toll on physical health.  It is known to be the leading reason for delinquency, school dropouts, antisocial personality disorder and suicide.  In adults, loneliness precipitates depression and alcoholism, and stress with sleep disorders and multiple medical problems. Psychologist John Cacioppo of the University of Chicago concluded that social skills are crucial for mental and physical wellbeing.

In geographic situations that contribute to isolation, but where children may turn to books of imagination, challenge and rewards, achievement and travel, one might anticipate emotional success.  But today’s educational system has removed such books and replaced them with dystopian novels, where the characters are immersed in loneliness, sadness, defeat, and an environment bereft of reason. The stories provide situations of crises from which the characters may not always extricate themselves.  Therefore, with no escape and nowhere to vent, the child can lose his individuality, creativity and the chance to form valuable coping skills, and be drawn to any available group mentality, as well as drug abuse and alcoholism.

Robbing the children of the necessary human encounter and intimacy conforms to Leftist ideologies, which intend to destroy all social, economic, and political artifacts of classical liberalism. We see disintegration of the old society and family in the history of the Soviet Union, but, significantly, there are parallels in Islam’s jihadi warriors who emerge from emotional solitude and emptiness. The Arabic term, Asabiyah, defined in Kobrin’s The Jihadi Dictionary, is comparable to group consciousness, group-think, and the loss of individuality.  By destroying intimacy, empathy and compassion, the group creates the shame-honor culture, using passive-aggressive behavior of intimidation and scapegoating.  Happin is the meaning and purpose of life, the aim and end of human existence.

The child who is friendless and isolated, bereft of independence and initiative, responds with obedience, guilt, and lying to protect himself from being ostracized.  He may then be vulnerable to joining violent Leftist movements or submitting to Islamic radicalization.

A civilization becoming a shadow of its former greatness – this is the gift of the Left.