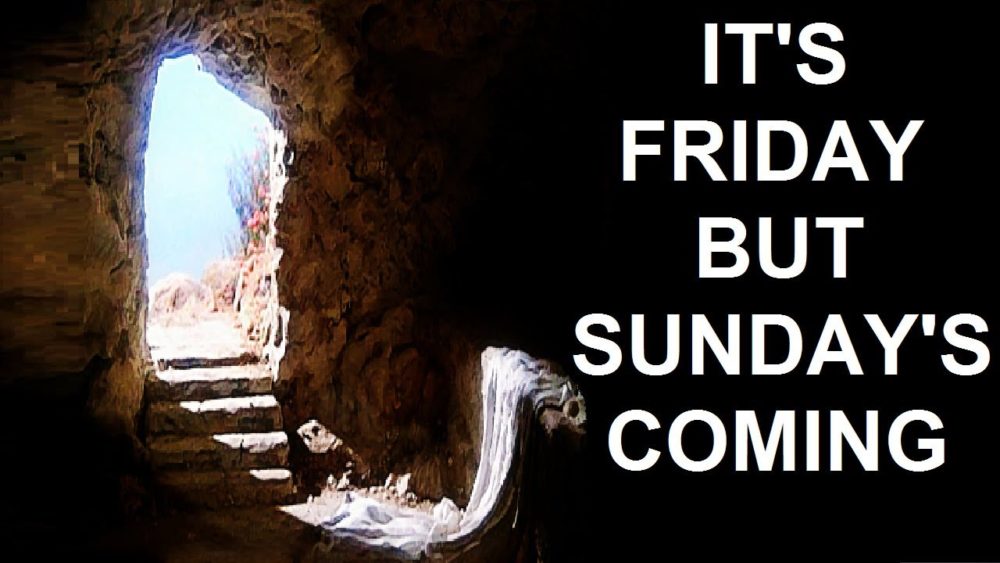 When I was in my twenties I served as an altar counselor for several years at the Orlando Jesus Festivals. I also led worship at baptisms and breakout sessions. Tens of thousands of people came from all over the nation, camping in tents, RV’s or just sleeping in their cars or on the ground. These four-day events were held for ten years, starting in 1976. We came to hear great music and experience great preaching.

I’ll never forget listening to Dr. Tony Campolo as he preached the powerful sermon, “It’s Friday – But Sunday’s Comin’!” This was not your usual Easter sermon. It told the story of the crucifixion and resurrection of Jesus in a way that had people on their feet, crying and shouting. Campolo brought home the truth of the Good News in an anointed way that few have ever done.

Dr. Campolo is so well known for preaching this sermon that he often has to remind people that it was not his. It was first preached by a black Baptist preacher named S. M. Lockridge in California. Pastor Lockridge showed both the darkness and the light of the most momentous weekend in history – from the despair on Friday to the victory on Sunday.

As I write this, it is Good Friday. As a kid, I used to wonder why, in light of the terrible events of the Friday when Jesus was crucified, it was called “Good.” I thought it should be called “Bad Friday” or “Sad Friday.” And in German, it is – the name is Karfreitag, or “Sorrowful Friday.”

But now I realize that Friday and Sunday are inextricably intertwined. Without the crucifixion, there could be no resurrection. Without Jesus’ suffering, there would have been no joy. Without His death, there would be no eternal life for us.

The irony of Good Friday is that Satan thought he had won. Many people who don’t understand the Bible don’t understand that God and Satan are not alike. They think they are mirror-image spiritual beings, sort of like Good Spirit – Bad Spirit. They assume that because God is all-knowing, Satan is, as well.

This, of course, is not true. On the Friday when Jesus was crucified, Satan didn’t have a clue. He saw that Jesus was crucified, suffered terribly, and bled for the world. He saw Him wrapped in grave clothes and entombed. Then he settled back with his demons to party for the weekend. He said to himself, “Life is good!”

Then the unbelievable happened. Jesus crashed Satan’s party and whupped him. He had risen from the dead! All of Satan’s scheming and hard work was demolished in an instant. Because he didn’t know on Friday what God knew – that Sunday was coming. That Sunday was the Son’s Day. That Jesus’ death and resurrection would result in His triumph over death, hell, and the grave. And that because He rose from the dead, we, too, would have eternal life available to us.

The disciples weren’t much better than Satan in the knowing department. Jesus had told them that he would die – and that He would live again. But either they didn’t believe Him, or they forgot. We don’t have any Biblical record of the disciples waiting around Jesus tomb, waiting for Him to emerge. And even when He showed Himself to Mary, They didn’t believe her.

Jesus scolded two of them for not believing Him, and for ignoring what the prophets had foretold regarding Him. He said to them, “Oh you are so foolish, and slow of heart to believe in all that the prophets have spoken!” He was upset with them because they didn’t believe; instead, they wallowed in despair, sadness, and fear of the future.

What about you? Are you experiencing a Friday in your life? Do you have family problems, financial stress or sickness to deal with, and you’re not applying your faith to believe that God is sending a Sunday to you? Or perhaps you have never had a personal encounter with Jesus, so you have no faith in the coming of Sunday.

Either way, God has a Sunday miracle waiting for you. Whether it is an answer to a Christian’s prayer, or forgiveness and salvation for those of you who have never accepted Jesus as your Savior, God wants to give you a glorious Sunday. But many of you are preventing Him from blessings you.

Yes, you – a mere human – can prevent God from giving you what you want and need. Believe it or not, God needs your cooperation to bless you. You need to do what He says to move from Friday to Sunday. The good news is that it’s easy. You just need to pray and believe. If you do, God will win – every time!

I pray that you have a blessed Resurrection Day.

NOTE: I have included some wonderful links below. Please take advantage of them. I searched through many links to find the best ones for you to enjoy. For instance, there and many recordings of Dr. Tony speaking the roughly seven minutes of “It’s Friday – But Sunday’s Comin’!” The one I linked to below has his voice coupled with images from The Passion of the Christ. There’s also a text version of the original sermon. And for those of you who experienced the Jesus Festivals (and perhaps some younger ones who want to see how their parents acted in the “olden days”) I found a short documentary of the 1985 Jesus Festival.

How YOU Can Experience Eternal Life

Schaftlein Report | Were the election results “baked in” prior to election day?! (with Gabe Rench)
November 30th, 2020 Liberty Hub

Joe Biden’s Putting That Old Anti-Israel Band Back Together
November 30th, 2020 The Lid