Globalists Have Been Using Third-World Immigration to Destroy America for the Last Fifty Years! 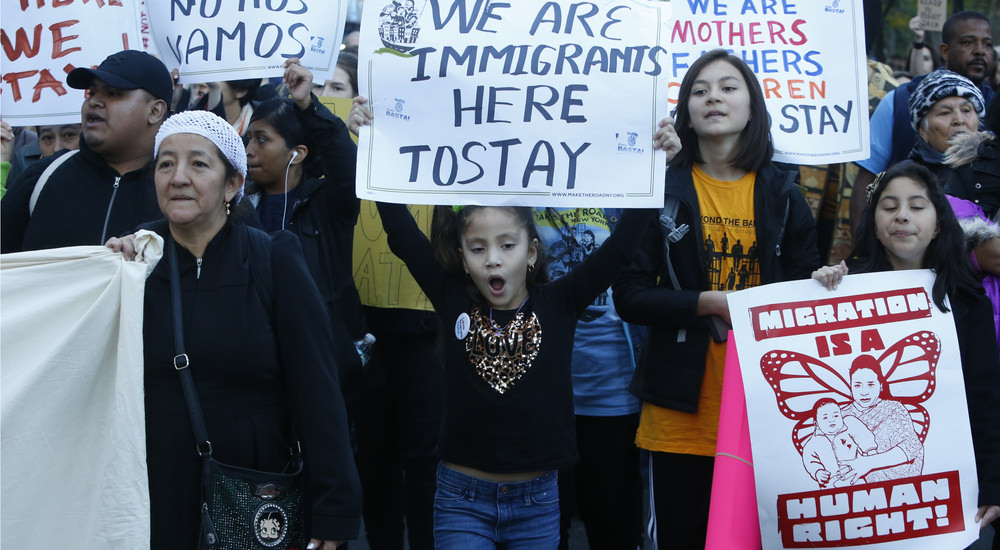 “The way forward is the way back!” proclaimed T.S. Eliot.

Deconstructing America through illegal immigration, de-stabilizing and de-nationalizing, is ending. The process must be reversed to reconstruct America! The fake news of liberal historians must be quickly replaced, with a true understanding of how weaponized immigration was used to deconstruct America…

During the past fifty years, the globalists attempted to conquer through immigration. Congress enacted laws on immigration, citizenship and territorial powers which deconstruct the United States as both a historic nation and a federal polity.

For nearly 200 years after independence in 1783, the US was demographically a “European” nation with never less than 81% of the population racially white and of European, overwhelmingly Northern European, ancestry. As recently as 1950, European-Americans still constituted approximately 90% of the total population.

What the Senators and Congressmen emphatically proclaimed as truth proved to be completely false. The impact of the 1965 Immigration and Naturalization Act Amendments nearly destroyed America!

Congressional sponsors of this legislation publicly promised the citizens of the US it (1) would not increase the annual levels of immigration, (2) would not lower standards for admission, and (3) would not redirect immigration away from Europe and (4) would not alter the demographic make-up of the United States.

Senator Robert Kennedy said “the new immigration act would not have any significant effect on the composition of the US.” Senator Edward Kennedy, floor manager of the bill in the Senate, asserted “This bill is not concerned with increasing immigration to this country, nor will it lower any of the high standards we apply in selection of immigrants.”

Rep. Emanuel Celler, dean of the House in 1965, insisted “the effect of the bill would be ‘quite insignificant’ on US population” and “that the bill would not let in ‘great numbers of immigrants from anywhere,’ including Africa and Asia.”  This was clearly deception but, as the Bible warns, “Let no man deceive you.”

What the Senators and Congressmen emphatically proclaimed as truth proved to be completely false!

The socially-engineered planned absence of American civics books, the subsequent lowering of American standards through liberal media, the American abortion rate keeping pace with its legal and illegal non-white immigration rate, all enhanced the lies of these Senators and Congressmen! All enhanced a Marxist political correctness imposed for the deconstruction of America!

And this was twelve years before the open borders of Obama would allow illegals to flood in starting 2008!
But as of just 1996, of the 2,684,892 illegal aliens granted amnesty by the 1986 Immigration Reform and Control Act, over 98 percent, 2,642,921, came from the Third World! From Africa, Asia, the Pacific and Latin America. The plan to deconstruct America through immigration was underway long before Obama!
The incremental immigration attack to deconstruct America grew out of control!

* Providing education for millions of immigrant offspring cost Americans a fortune, while severely dumbing down indigenous American students forced to be politically correct to accommodate the much slower pace of learning, required by legal and illegal immigrant students who poorly spoke English as a second language.

* The impact of Immigration on US pop. growth including immigrants accounting for 62% of net growth in US pop. by 1995! Thirteen years before the Obama flood! “Houston, we have a problem!”

* Pedophile President Bill Clinton championed a non-European America! At the White House in June, 1997, Clinton declared that “We want to become a multi-racial, multi-ethnic society.” Through Clinton, the Trotsky communist agenda of Marxist Multiculturalism was further imposed on America!  The atheist Trotsky manipulated a “moral high ground” with inventing the word “racist” to make Europeans feel guilty about not accepting his Marxist Multicultural impositions.  Pedophile Clinton continued the Trotsky agenda!

* If this is not turned around, European-Americans will not possess any Constitutionally-protected minority rights!

* The attack on the English language was well underway! A globalist-controlled Congress passed the Bilingual Education Act in 1968 authorizing the education of non-English speaking children in their native languages. By 1993, the annual cost of just bilingual education was $12 billion! Imagine what it became under Obama! And starting in 1993, US District Judge Alfredo Marquez presided over part of a naturalization ceremony conducted in Spanish!

* Also needing to be overturned is the 1974 “Lau v. Nichols” and “Plyler v. Doe” saying that illegals must receive free education provided in their native languages. Note” The level of American education cannot – I repeat, cannot – be raised until these are dealt with. Note that starting in 1997, the Office of US Civil Rights in the US Dept. of Education, began threatening legal action against local school boards that want to teach children in English. The US Dept. of Ed. is illegal and anti-Constitutional and Betsy DeVos performs a great and lasting service to America by permanently dismantling it!

The attack on European Americans must end. This is our country and who we are.  One cannot bring the whole world into America.  Rising assaults by Hispanic and Islamic militants, against both the English language and European Americans, are part of the heinous globalist/communist agenda to deconstruct America! While globalists used their proxy legal and illegal immigrants to make America into just one more world-govt. colony, President Trump, with our support, will reconstruct America, till it is once again the bright and shining world leader!