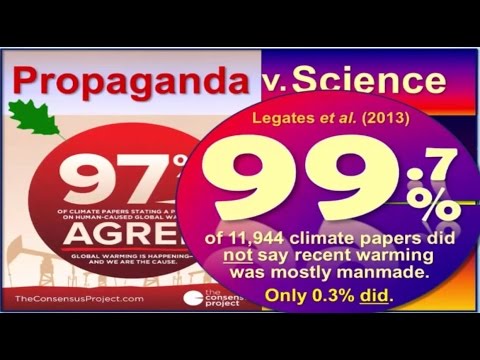 On December 13, just a few days ago, some 26,000 scientists gathered “in the first major convening of climate scientists since the presidential election.”

Of course, there weren’t, as is described, 26,000 scientists. The 26,000 actually consisted of some “scientists” along with a gaggle of left wing environmentalist wackos who were there not for the “Fall Meeting of the American Geophysical Union,” but really to just protest the election of president “Climate denier.”

The anti-Trump rally called “Stand Up for Science,” was organized by ClimateTruth.Org and The Natural History Museum, a self-described “mobile and pop-up museum that champions bold climate action.” Neither of these “organizers” has anything to do with real science. They are there, as they all are, for one purpose – to push the man-made global warming agenda.

They claim their greatest fear is that president Trump will begin to dismantle all they have worked for. They are worried that he will decimate “laws and regulations that protect clean air and water, limit greenhouse gas emissions, and restrict drilling and mining offshore and on public land. Other concerns include Trump’s pledge to withdraw from the Paris climate agreement.”

As one left wing loony put it: “We’re rapidly progressing into becoming the United States of Oil.” And that would be terrible – to fully develop our own sources of domestic energy so that we no longer have to be at the mercy of foreign sources – that take our money and fund the very terrorists who attack us. That will be terrible.

So why are University “climate scientists” from Harvard, Penn State, Georgia Tech, MIT and many other schools really joining these left wing radicals on the streets of San Francisco. Is it really that they are afraid Trump will ruin our oh-so fragile

environment? Or could it be something else.

Yahoo Finance described the meeting as “the world’s largest gathering of Earth scientists, and this year, one of the main topics of conversation is how deeply the Trump administration may cut federal research funding.” Gee – Yahoo Finance. Wonder why a financial site ran the story? Hmm.

Now we get to the heart of the problem – why they are all so apoplectic over the election of Trump and his nomination of several “climate deniers” to Cabinet positions.

Oh sure, most if not all of these activists masquerading as scientists truly believe that humans actually have the power to destroy the Earth, but more importantly they understand that if Trump is able to have his picks confirmed, these new agency directors may pump the brakes and the federal government “gravy train” may grind to a halt.

The majority of funding for these university faux-science projects is provided by the federal government (us) and they can literally see this coming to an end, or at least slowing to a trickle. This, as it should, scares them to death, as many have not had to conduct any real scientific research for years, possibly their entire careers.

Leftist radicals of all stripes are loony enough when they and their kind are in power. However, when they lose that authority as they just have (we hope), is when they really go nuts.

If president Trump’s policies regarding global warming align with his campaign and post-election rhetoric, we should expect to witness the full-on melt down of the radical environmental set. It might be fun to watch.