Getting to Know California’s Village Idiot 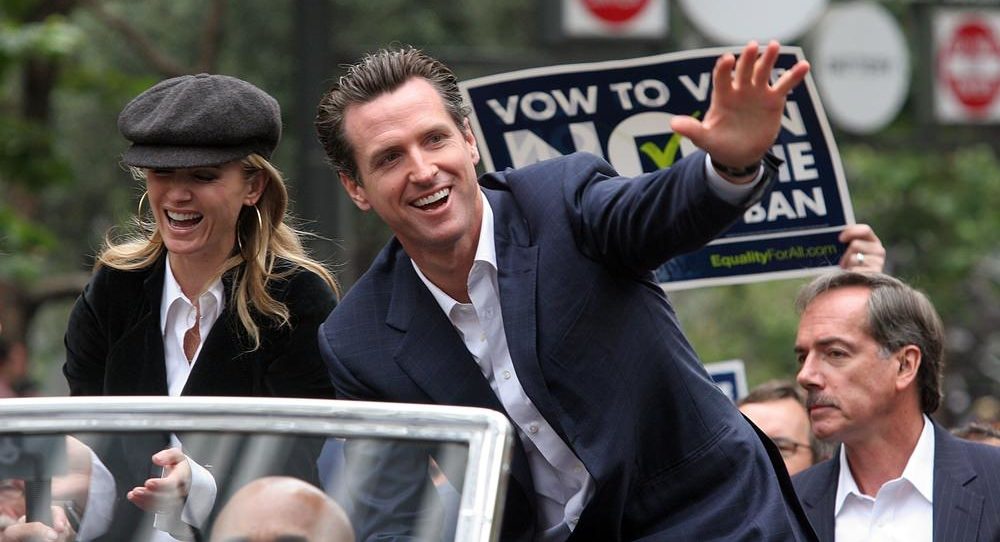 Perhaps the most politically ambitious man to ever ply California politics is Gavin Newsom, Lieutenant Governor of California. Where every small town has a village idiot we have this state idiot who apparently plans to ride to the Presidency of the United States on the Second Amendment using it as a surfboard to fame, wealth and power, thinking he has a winning argument.  In fairness we here offer the Wikipedia entry on Gavin:

“Gavin Christopher Newsom (born October 10, 1967) is an American politician, businessman and television personality who has served as the 49th Lieutenant Governor of California since 2011. He is notable for hosting a television show named after him in Current TV and for his guest appearances in HBO‘s Real Time with Bill Maher.

Newsom has been involved in controversial and high-profile relationships, including his former marriage to Fox News contributor Kimberly Guilfoyle and an infidelity scandal in 2007. His political career highlights include his advocacy for same-sex marriage and the legalization of cannabis in the United States.

Newsom studied at Redwood High School and graduated from Santa Clara University. After graduation, he co-founded businesses with family friend Gordon Getty, who was an investor. Newsom began his political career in 1996 when San Francisco Mayor Willie Brown appointed him to serve on the city’s Parking and Traffic Commission and as a member of the Board of Supervisors the following year. Newsom drew voter attention with his Care Not Cash program, which was designed to move homeless people into city-assisted care.

Mr. Newsom is said to be the author of Proposition 63 which is officially summarized as:

*Requires individuals to pass a background check and obtain Department of Justice authorization to purchase ammunition.

*Prohibits possession of large-capacity ammunition magazines, and requires their disposal, as specified.

*Requires most ammunition sales to be made through licensed ammunition vendors and reported to (the) Department of Justice.

*Requires lost or stolen firearms and ammunition to be reported be reported to law enforcement.

*Prohibits persons convicted of stealing a firearm from possessing firearms.

Not only is the measure unconstitutional, but it is deeply flawed.  As written you are not required to report the theft of a firearm or ammunition as both were not stolen together.  The measure is full of many small glitches of this kind, but it is conceptually idiotic and makes many private citizens criminals for no reason.  It is going to clog the courts, pack the jails and prisons with people that are only trying to protect themselves where an overworked, under-appreciated law-enforcement force cannot.

If you report a crime in California today a police officer or Sheriffs Deputy may show up in two days, spend 15 minutes with you, get an emergency call and leave two black streaks in your driveway as he hurries to a shootout-in-progress scene.  Mr. Newsom will turn that into a week and swamp the courts with honest citizens who will not know “What the Hell is going on here?”

What else can we expect from a man so stupid he cheated on one of America’s great beauties, Kimberly Guilfoyle, when he should have been thanking God every day that he was blessed with such a magnificent wife.  She was so deeply wounded by Gavin she has turned down four proposals for marriage and we can be sure they were not skanks.  A lifelong Catholic and serious person she may never marry and bring forth in an America where our more intelligent people are have far less children.

All legislation of this kind is meant to concentrate power in the hands of the elected ruling class, the same people that are universally corrupt at every level from school board to city and county halls, state legislatures, Congress and the White House.  The Founding Fathers knew the nature of men and did the best they could in our Constitution, but today scoundrels like Gavin Newsom are doing their best to rip it to pieces.  It California ballot Proposition 63 passes it will be one of the final nails in our coffin; one crafted by the California State Idiot, Gavin Newsom.