The Failed Foreign Policies of Liberals and Neocons 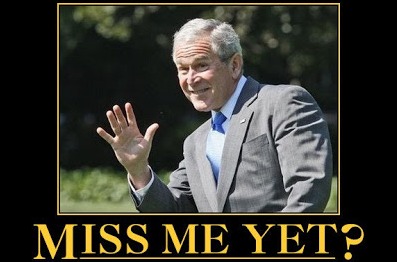 Leave it up to God to judge Dubya’s soul, but for the rest of us mere mortals assessing his politics is not just sport, it is essential survival protection.  The loony left is taking delight in his past troubles.  True to human nature, the rat pack has suspect motives, even when outrage is the fitting response.  As usual, the bleeding heart utopians fail to understand the game that is playing itself out.  Their idea of a villain is that bad old conservative President.  Their kind of hero is that lip biting, “I feel your pain” philanderer.  A womanizer is the next best thing to having a woman President.  Well, here we go again!  Wrong on all counts.

The reason that DemocRAT’S can’t be trusted as partners in holding the GOP accountable for their offenses is that they are unwilling to comprehend the kind of mortal sins that the Bush administration has committed.  Liberals are not crusaders against vice, they indulge in excess as a matter of principle.  But what is the excuse of solid Republicans in supporting and defending a failed Presidency?  After all he is one of us, isn’t he?  Sorry misguided and deceived conservatives, your trust has been ill placed.  George W. Bush is a fraud.

Hey big spender, what does is matter if you bankrupt the country in the pursuit of eliminating WMD!  All that matters is the intention of doing the will of God . . .  since when do facts matter?  The culture of self-destruction fostered under Clinton absolves the fearless leader from any responsibility.  The disconnect from reality was at the heart of their program.  So why hold Bush II to a different standard when you have the purveyor of treason as the model for a bridge to the new century?  What escapes both camps is that U.S. foreign policy is essentially the same under every administration.  It’s usually wrong in its most sacred mission – protecting the people of the America.

If Slick Willie can gift the means to send Chinese into space, why not give a pass to King George for constructing a greater Israel in the Mesopotamia basin?  Those Zionist ‘so called’ allies are true to their divination with their latest deal.

“It appears from a number of sources; the foreign media, technical websites and personal information, that the state of Israel has negotiated a business deal with the PRC to supply spy satellite service to that country, an action relatively unknown to but certainly against the wishes of both the Administration and the U.S. intelligence community. Israel, who possesses the fourth largest army in the world, has become the 3rd largest exporter of weapons in the world selling everything from Uzis to PHALCON airborne early warning systems. UK Defense Ministry figures show Israeli weapons export contracts were worth $4.1 billion. Only the United States with $13.2 billion and Russia with $4.4 billion sold more weapons this  year.”

Really now, how serious could President Bush be about protecting our nation when reigning in Israel is the net result of his entire NeoCon foreign policy?  Advancing Zionist regional domination in not healthy for humanity.

As for the Bush acquiescent approach with China, consider the urgent concerns regarding central Asia.  “Chinese foreign policy has also been enlisted in the task of labeling virtually any and all manifestations of opposition as being terrorist conspiracies. Beijing successfully prevailed upon the administration of US President George W Bush to label the East Turkistan Independence Movement (ETIM) as a terrorist group, thereby rewarding China for supporting the US-led “war against terrorism”. The question of Xinjiang’s, (largest province on western border) future goes to the most basic issues of what constitutes the Chinese state both territorially and politically, ie what will be its territorial boundaries and how will political power in that state be constituted. To eliminate this perceived threat, China has undertaken a massive “go west” program for the better part of a decade, believing that the main spur to ethnic-nationalist and religious unrest is a lack of economic development and opportunity. Thus it has launched massive development projects in energy and transportation infrastructure to more fully tie Xinjiang to China’s coastal development and to Central Asian economies.”

China is no partner but is a strategic opponent.  The pattern of Israeli courtship with a bellicose Sino Asian tiger is most disturbing.  Harvey Morris writes: “What worries US strategic planners is that, as a consequence of these apparently warm ties, high-technology weaponry that leaks from Israel to China could, in turn, find its way to what the US regards as rogue states in the Middle East.”  But what is more significant is that American technology that is shared with Zionists, even when intentions are innocent, invariably is subverted when sold to a hostile Chinese rival.  Such betray by Israel is par for the course.  President Bush like most of his predecessors bases his inept policy on a fundamentally false principle.  Khazar-Jews are not Israel of the Bible.  The “born again” heretic President is an apostate disciple.  As commander and chief, he fosters a temporal Armageddon without a spiritual apocalyptic salvation.  Misguided Christian fundamentalists actively encourage a submissive Israel-First foreign policy that grossly favors an undeserving country.  Such an atomic rogue state aiding and abetting another nuclear adversary is sheer madness.

What benefit do Americans derive from the humiliation that both political parties impose on our true national interests?  Bush is surely a hypocrite, but more important he is an enabler of betrayal.  Both foreign foes and domestic traitors work ceaselessly in their quest for destroying our country.  A Chinese-Israeli spy satellite deal is the latest outrage that is routinely accepted as normal – the price demanded and paid for supporting Zionism.  When will the United States elect a true America-First “born truly patriotic again” foreign policy leader?  Bush has proved unworthy of such claim.  Until citizens of all parties or political persuasion recognize the deep-seated treachery that passes for sound international action, our nation will be at dire risk.

How many more espionage offenses do we have to suffer before the underlying policy is changed?   The American Israel Public Affairs Committee (AIPAC) spying saga is but the tip of the iceberg.   Add to that the finding of the January 3, 1999 Cox Report on the People’s Republic of China (PRC) ongoing espionage that stole design information on the United States’ most advanced thermonuclear weapons.  Ask if such subversion serves the genuine defense of our communities?  If these are friends, God save the Republic!  The fact that both Israel and China are on a path of joint  cooperation should prove that the Zionists are intent on exploiting Chinese distress of internal dissent.  Tolerating this pact between collectivist systems is a crucial mistake, especially as the technology transfer continues to both regimes.  Bush is more than a deserter of national interest, he is a man who’s faith rest upon the heretical doctrine of satanic ritual.  Oppose Bush for the correct reasons and insist upon a fundamental change in foreign policy – demand that America-First becomes the solution.