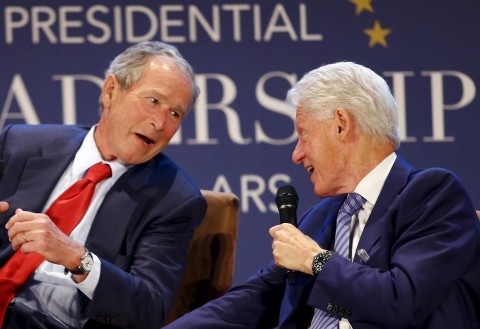 Preface: Nothing makes me more ticked off than a George Bush and a Bill Clinton yucking it up.

I get vomit stuck in my mouth whenever I see a Bush and Clinton together. The George Bushes are supposedly the elder statesmen of the Republican Party, but they act like dopey suckers. They talk about the dignity of the office of president but they besmirch our nation and traditions with their New World Order agenda. They associate with one of the worst people to occupy the oval office, Bill Clinton. They believe that they are part of an exclusive club of ex-presidents but they act like Skull and Bones members reminiscing about their frat boy days.

It is like watching your grandmother get stupid drunk at a party… I could go on with analogies, but I won’t. When George H.W. Bush jet set with Slick Willy I wanted to ring his skinny little paratrooper neck. I wondered out loud “why didn’t that tough woman he married kick his ass for associating with such a reprobate.”

I blame Barbara for going along with the charade of her husband hobnobbing with a known rapist. But, I especially blame the father for selling out his country and birthright for 40 pieces of silver. And, the sins of the father are visited upon the son. As his dad is on his deathbed, Georgy Bushy continues to rub elbows with Willy Clinton at an event ironically titled the Presidential Leadership Scholars Program. Yes, let’s study the traits of a great criminal who happened to be a president.

That is the lead in, now consider the following conversation as a satirical parody of the so-called graduation discussion forum that took place this week:

At a recent event, George and Bill sat down to talk about their greatest hits.

George: I never really did anything I shouldn’t have while President, but I got a few girls really drunk, and ya know…

Bill: That’s nothing George, heck once they’re drunk it’s all good. Let me tell you about this one babe I met in Acapulco… And then there were those Epstein chicks… Getting around is one of the privileges of power.

Moderator: That’s a great story about presidential leadership. Can you describe the traits of a great president?

Bill: You need a psycho crazy wife who is willing to do and say anything to hold onto her insane goal of becoming president herself.

Bill: If she doesn’t care that you screw anything that moves, why should the American people? Right? Ya know what I mean. About 80% of the women have said I am such a stud.

George: I agree with Bill.

Bill: I mean Juanita said I raped her, ten years later. Kathleen wanted me to grope her. And Paula was asking to meet Little Billy so what could I do? Gennifer was an affair that was totally on the up and up. Hillary would watch us sometimes. And Monica was just a fling to blow off steam. And those are just the ones that everyone knows about. I’ve got over a dozen bootie calls waiting for me in my contacts.

Bill holds up his phone.

Moderator: In light of the recent Bill Cosby mistrial, what are some tips you have for aspiring rapists, molesters or sexual abusers?

Bill: First off, bite the lip. That is a good way to inflict some pain and get them to lay down. Secondly, always clean up after yourself. And third, marry an ugly feminist that doesn’t care.

George: Well, this has been enlightening. Thank you for joining us here at the George W. Bush Presidential Library. While it doesn’t compare to the William Blythe Jefferson Clinton Library, Massage Parlor and Gentleman’s Club, we like to think that we can hold our own.