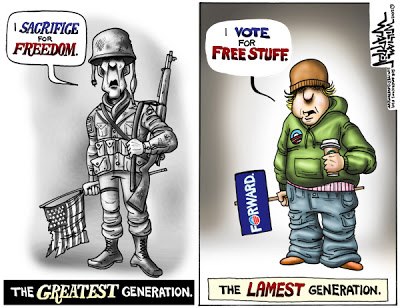 Millennials are the canaries in the coal mine of democratic socialism.  Why do they have such a tough time facing life?  Millennials are being taught that they can get everything for free as if they are still children living off their parents rather than having to work for it.  They are being taught that masculinity is toxic and that being effeminate girlie boys is being caring, allowing them to compete against girls in sports where it’s easier to win.  They are being taught that global warming is science wherein mankind is causing the end of the world rather than the leftist religion of which it is born.  Millennials, like much of America’s consumables, are becoming disposable to Democrats who are striving to replace them with foreign workers.

Young people are being taught not to strive for their own prosperity but to wait for Democrats to provide it for them all their lives.  What they don’t understand is that the Government doesn’t provide anything without first taking it from someone else.  This is socialism.  Education has never been free – your parents pay for schools through their taxes.  Welfare has never been free – working people pay for it through their taxes.  Social Security and Medicare have never been free – the government pays for them by taking working people’s money in taxes.  Millennials are the dupes who never learned how the world works but now want to be in charge of how things are done without understanding that it takes work to get anything done.

D is for disposable Democrat dummies.  If they ever did their homework to learn about America’s left and right political parties, then they would know what Democrats have always been.  The only way they can be convinced that Republicans are the KKK, neo-Nazis, and want slavery is by being uneducated.  The only way that they can be convinced that America, capitalism, and fossil fuels are going to destroy the world is by being miseducated.  Rather than being taught that America is the greatest good in the world, they are being taught that America is the evil in the world.  If they studied history or even studied current events, rather than just believing what they are told to believe, then they would know that America is always at her worst when Democrats are in charge.

Just an examination of the last generation tells you the difference between Democrats and Republicans and the difference between conservatism and liberalism.  Republican conservatism is about solving problems while Democratic liberalism is about whining over problems.  Republicans propose solutions while Democrats speak of ethereal utopias as they spew poisonous hate about Republicans.  That’s why Democrats form groups like Obama’s Organizing for Action with its spawn, Black Lives Matter and Antifa.  They say they are working for liberty against fascism.  But BLM riots in the streets advocating for criminals as they demonize police, while Antifa riots on college campuses to silence conservative speakers they call fascists.  They do this because the left must silence the righteous truth lest it be heard by people who will realize they are hearing good moral sense.

Millennials have lived through but not learned from the history of the last ten years as Obama crushed America’s economy with his high taxes and regulations, funded the Muslim Brotherhood to create the Islamic State, and empowered America’s enemies.  As President Trump has undone much of the Obama’s wickedness by destroying the Islamic State, reducing taxes, and eliminating regulations to allow businesses to flourish, he has been beset by the poison of leftist hatred slandering him in every way.  He is blamed for the border crisis of millions of Central and South Americans fleeing the tyranny of socialism that Democrats helped breed in their countries.  That the young cannot see through the smoke and bile spewed by the left is a testament to their ignorance due to leftist indoctrination in schools rather than education to think logically and critically.

While Republicans try to teach Millennials to be strong, independent, and responsible, Democrats are teaching them to be the opposite.  They are told they think for themselves when they mindlessly follow their indoctrination like lemmings.  With the worthless, parasitic population they are growing, Democrats need people who will work, so they import foreigners illegally.  They say they are helping refugees, but these refugees enter America as criminals breaking the law to be in the country and not caring if they break more laws such as voting illegally.  Democrats advocate for criminals in America as being victims of racist police, then give them benefits and rights that criminals should not have over citizens.