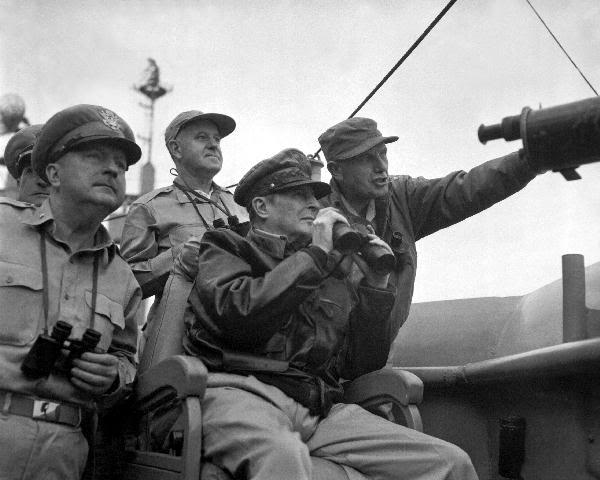 The Great Patriot Donald Trump, exposing the mishandling of Syria and the internal decay in America, has repeatedly proclaimed, “General George Patton and General Douglas MacArthur would be spinning in their graves!”

Indeed, this could very well be true. But we as Americans do know General Douglas MacArthur would have us learn from true history! The great general would be appalled at today’s liberalized American history books – which made secret what he resounded in public!

As with Donald Trump, the largest journals in America branded General MacArthur as an American Hitler and then proceeded to smear him and undermine his reputation. He came to Los Angeles to celebrate his birthday and delivered a great address extolling Christian Nationalism.

In a similar address in Houston, he glorified the Cross and the Flag as the two most dynamic and significant symbols. General MacArthur, in a 3-hour secret interview granted to Christian Patriot Gerald L.K. Smith, confided, “This civilization cannot survive without the dynamic of Christianity.”

In this interview, MacArthur “conveyed in no uncertain terms his complete lack of respect for the man who was then in the White House, Eisenhower, who had joined with his predecessors to veto victory in Korea.” General MacArthur revealed that defeat in Korea – as with American defeats today including Libya, Iran, and Syria – were ordered by individuals in positions of final authority in Washington, D.C.

In his retirement location in Waldorf Tower, MacArthur revealed to Smith that traitors were in command and that our Nation was being degenerated by treason, weakness and corruption. What General MacArthur said next to his interviewer he said to every true American living today: “Only men like you, unafraid to be smeared and unafraid to die, can save our America from that which is being attempted against it.”

Unafraid to be smeared and unafraid to die? Has not the great Donald Trump proven this over and over? Putting his reputation on the line against the epic collusion of smear, to save America and Make America Great Again!

In the final words of this interview neglected by corrupted history books, Smith asked, “General MacArthur, as a crusader and a very independent citizen I am not one given to blind obedience, but if I were to obey any man blindly I could be tempted to obey you. Please give us a final word by which we can live.”

General Douglas MacArthur said: “I give you just two words:  Never weaken!” Then he repeated: “Never weaken!” Precious words for all true Americans! And currently lived and breathed by the great Donald Trump, who demonstrates time and again as a role model that he will “Never weaken!”

(This original signed interview with General Douglas MacArthur is owned by Vigileaks. A second secret interview with MacArthur was made by Jim Lucas, an eminent reporter for the Scripps-Howard Syndicate, showing MacArthur revealed the manipulators in Washington and London betrayed him, resulting in the manufactured Korean defeat. This truth is in complete contradiction to former Dept. of State official and Infowars interviewee, Steve Pieczenik, known for his wild untruth that Eisenhower was a great president for ending the Korean War: “What made Eisenhower great? He took us literally out of a failed Korean War initiated by Truman and refused to enter another war –Vietnam War, (unfortunately ultimately initiated by JKF and LBJ.)” ― Steve Pieczenik, STEVE PIECZENIK TALKS: The September of 2012 Through The September of 2014. These words by Pieczenik are absolutely false.  Beware of infiltrators on Infowars who still smear the words – directly or indirectly – of the great General Douglas MacArthur.)