The Gap has become a Chasm: The Religion of Liberalism 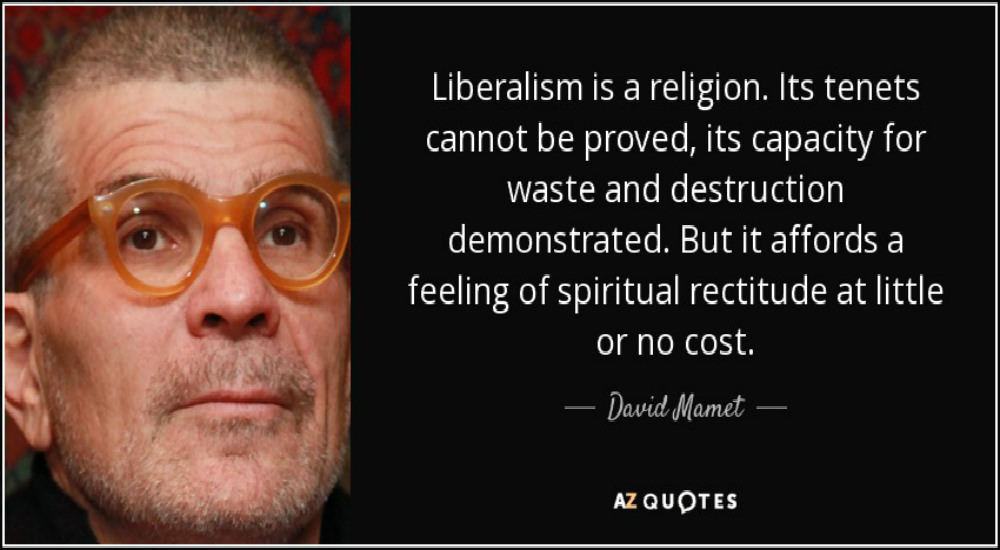 “The political picture has now changed…from entertaining to deadly serious and the gap has become a chasm.”

I was very disheartened to receive the above e-mail comment from Mary, an assisted living facility resident whom I and my therapy dog had been visiting. For over a year, Mary and I had engaged in lively weekly debates over a wide range of political issues, with Mary (a fervent Obama supporter) taking the liberal side and me the conservative.

Now, Mary was terminating our relationship, based on the “deadly serious” nature of the current political climate. How did the respectful and congenial differences in our political views become (in her view) a “chasm” which she could no longer cross?

A History of Failure

Like many conservatives, I have long been puzzled by contemporary liberalism’s constant and fervent advocacy of policies which have been repeatedly proven not to work:

Despite its long and dismal history of failure, socialism continues to be advocated by a broad range of liberal academics, pundits, and politicians; despite trillions of dollars in transfer payments since the Great Society, widespread poverty and government dependence persists; despite their perennial advocacy of higher taxes and government spending, liberals’ programs to “stimulate the economy” and “create jobs” invariably fail.

The above is just a brief sampling of liberal policy failures, the full catalog of which would fill a book. I suspect that my recounting of them is what so upset Mary, especially as applied to the Obama presidency.

This history of failure raises a couple of questions. Why do so many liberals persist in advocating policies which experience and empirical evidence has repeatedly proven wrong? Why do many of them react so emotionally when this evidence is presented to them?

The answer is that contemporary liberalism has morphed into a quasi-religious hybrid of political ideology and passionate conviction. In other words, it is the closest thing America has to a secular religion.

Try to argue with a Marxist over the Labor Theory of Value. Try to debate a Christian over Christ’s divinity. Try to convince a Muslim that the Koran is not the literal word of God.

For the faithful, these principles are not subject to argument. They are part of the canon, or axiomatic principles, of the faith. Nothing can shake belief in these principles, because the true believer in them has taken what the Danish philosopher Kierkegaard called the “leap of faith.”

This explains why, for my liberal interlocutor Mary, our political differences created a “chasm” which could not be bridged. She simply could no longer tolerate having her core political beliefs (or faith in Obama) challenged.

There is an identifiable set of principles which form the liberal canon. A partial list includes:

• Government intervention in the economy through high taxation and income redistribution is necessary to remedy the inequitable distribution of wealth in America.
• Racism, sexism, and other forms of discrimination are still so prevalent in America that it is the government’s responsibility to guarantee equal outcomes for all disadvantaged groups.
• The idea that America is an exceptional nation was illegitimate from the start, because many of the Founding Fathers owned slaves. (Hat tip to Rush Limbaugh)
• A woman’s right to have an abortion is absolute and unqualified.
• Anthropogenic (man-caused) climate change is settled science. Failure to remedy this problem will result in global climate catastrophe.

It can be as intensely frustrating and pointless to debate a liberal on one of these canons as it would be to question his or her religion. Anyone who has engaged in this debate with liberals knows that many of them will immediately change the subject, invent their own facts, or react as if personally offended.

For example, there’s the climate change debate. It’s likely that no amount of rational argument, recitation of contrary evidence, or citing of contrary scientific opinion will shake your liberal interlocutor’s belief in the “settled science,” or that dissent from this belief belongs on the same moral plane as holocaust denial.

Of course, inflexibility, dogmatism, and stubborn close-mindedness are found on both ends of the political spectrum. Not all liberals are true believers, and not all conservatives are open-mindedly tolerant of dissenting views (see the abortion issue).

The fact remains, however, that (with a few regrettable exceptions), the resort to mob rule, vandalism, and violent protests is far more prevalent on the left. Mobs of Trump supporters didn’t disrupt Clinton or Sanders rallies, or show up to “occupy” the Democratic Party convention. There’s no epidemic of vandalized cars sporting “Hillary for President” bumper stickers.

After all, if you don’t completely agree with a liberal activist’s views on “social and economic justice,” abortion rights, or climate change, what’s there to discuss?

Now, about that “Trump for President” bumper sticker on your car…