The Game Of Oval Offices 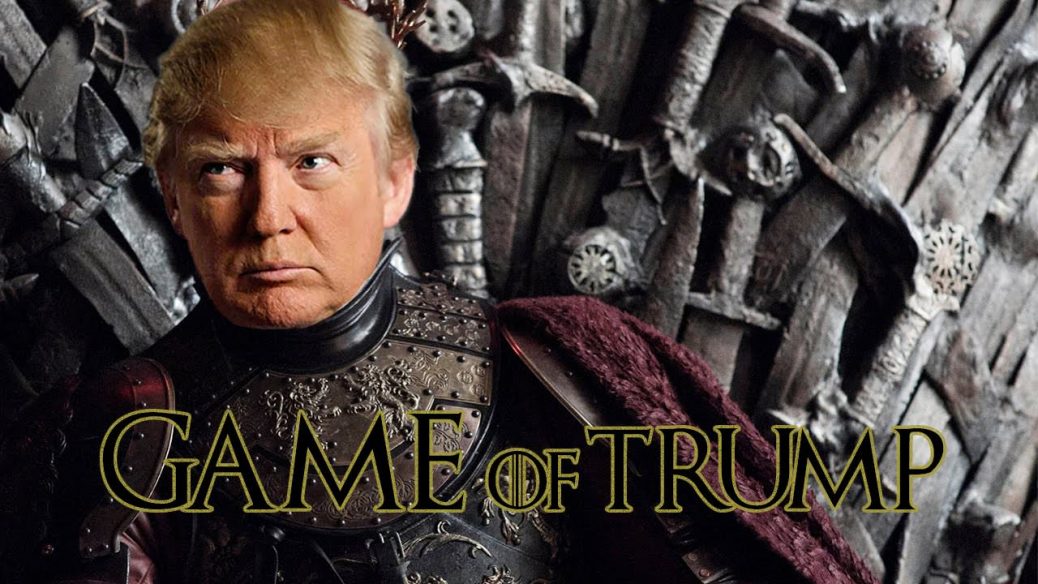 Has one of the most popular shows on television, a soul-corrupting descent into perversions of every kind, where characters pursue power at any cost, with the greatest liability always presented as any sense of honor or decency, “The Game Of Thrones,” found a parallel in our troubled times?  For those who do not know the show, nor the story, nor the characters, I want no part of encouraging you to view it.  This kind of show would have never been produced in more, let’s say, more Christian time, where it would have been met with appropriate moral outrage, inevitable calls for censorship, or whatever, but in our jaded times, it meets with very little of that, which must disappoint the producers to  no end.  Why, even the murder of a pregnant woman in a fashion reminiscent of the Manson murder of Sharon Tate, barely raised a moral eyebrow, as fans of the show marveled at the audacity of such a spectacle.  The only slight hackles raised at all have been a result of the rape of a virgin bride on her wedding night, by her particularly despicable husband, in an arranged marriage.  The rape of a virgin still pricks the conscience, even when the murder of a pregnant woman is met with reverence and awe.

It is instructive that this little exercise in visual art extremism is so popular, and raises so little outrage among those who it was intended to outrage.  We are at the point that moralists have been warning us about since the sixties.  There is little further to descend when a show has incorporated every taboo and depravity into a script.  It is a challenge to find one that has been missed.  But such are our times.

And, our times are reflected in our politics.  Our political candidates appear to be paralleling the characters in this experiment in deviancy.  There is Cersei Lannister, who found herself with some embarrassing legal trouble, and managed to murder her husband, the king, and basically burned down the courthouse with everyone in it rather than facing justice for her actions.  She explained that she did it because it gave her pleasure.  And we wonder about one of our presidential candidates and the lengths to which she might go to avoid facing justice?

And then, there is Ramsay Bolton, an ambitious bastard who murdered his father, his father’s wife, and half brother to enhance his political position, and who tortures mercilessly his enemies to the extent of removing one’s manhood, and sending it to the man’s father.  Or, Petyr Baelish, also known as Little Finger, the business man, the owner of brothels, who ruthlessly schemes and marries and murders his wife to enhance his position.  A man who was described as one who “see this country burn if he could be king of the ashes.”  Maybe we can find a parallel among the candidates?  One who dispatched 16 of his well-meaning and better-liked political rivals with slash and burn political tactics?

Of course, we should not neglect to mention that the political situation in the “Game of Thrones” comes in the wake of the “Mad King,” who pretty much planned to burn down the entire realm, innocent and guilty alike.  We wonder if there is a parallel for the Mad King in our real-life political situation?  Is there some political working driving the divisions we see?

We give our real-life candidates some benefit of the doubt for not directly murdering anyone, though there is a bit of a body count in the trail of Mrs. Clinton, if we consider the four who died at Benghazi.   No, she has not burned down the courthouse nor murdered everyone seeking to bring her to justice, but we do wonder, if she had the means, and thought she could get away with it, and the stakes were high enough, what might she do?  And, Donald Trump has only figuratively murdered his political rivals.  But, I would say, our election looks a lot like a matchup between Cersei Lannister, and a combination of Roose Bolton and Little Finger.  But, even on this crazy, over-the-top, fantasy of a show, there are few people who would vote for any of these characters, unless for fear of a throat-cutting.  I expect that our election will have similar motivations.  Mr. Trump run on the “vote for me, or Hillary will burn down your house” line, and Mrs. Clinton on the “vote for me, or Donald Trump will feed you to the hounds” line.  And, since all the descent candidates, with some sense of morality and decency have met their political fate, that is all there is left.  But, the real problem is not with the candidates.  It is with the populace.  Nobody elected Ramsay Bolton or Cersei Lannister.  Our real-live jaded electorate has delivered us this spectacle, perhaps for no other reason than it will be a good spectacle.  The game of Oval Offices.