From Whitewater to Whitewash 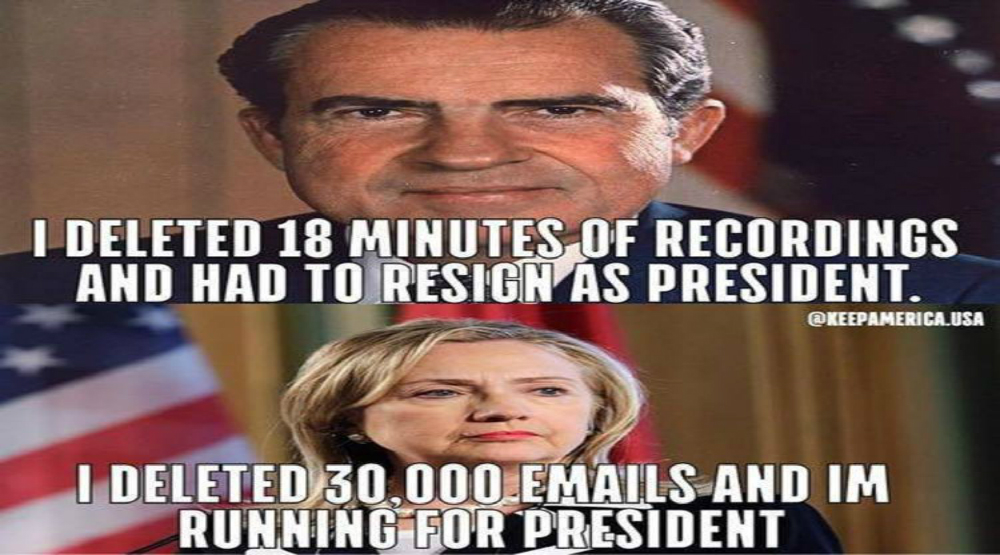 I remember being glued to the TV as Richard Nixon was leaving the White House in disgrace. I remember thinking that I hoped our country would never have to suffer such a moment again.

Little did I know that in the past 8 years of Obama and Hillary Clinton I would become somewhat numb to the astonishing whitewashing of things that would have landed any Republican politician in prison or totally banned from public service. I guess in Hillary’s case she has had years of practice starting somewhere around Whitewater and moving on to more insidious things like creating the “vast right wing conspiracy” garbage to cover up her husbands sexual escapades ending with Bill lying to the country about the deposition of his semen on the blue cocktail dress.

I remember Bill being as indignant about that affair as Hillary has been about the e mail server that she had in her basement. I suppose they must practice every morning how to tell bold face lies and smiling at their ability to buffalo the little people that they want to rule over.  I watched as Lois Lerner got away with targeting Conservative groups and clearly being corrupt. I saw the most devastating scene of our ambassador being dragged in the streets of Benghazi and 4 soldiers lose their lives while Hillary and Obama clearly focused on how to blame a video for what even she admitted to her daughter was NOT a spontaneous attack. I think that poor man that made the video spent some time in jail due to Hillary and Obama. Last but not least I witnessed the FBI director on tv making a statement that MOST people thought sounded like a clear indictment of Mrs. Clinton and I had such great hopes that integrity had somehow creeped back into government. Quickly that was dashed by the FBI director saying basically “yes Mrs. Clinton did things that any other American in the military or government office would have been sent to prison or fined and removed from ever serving office BUT it IS Hillary Clinton so we will just let it go.”

Sadly, that reinforced that there are one set of rules for the Clintons and another for the little people out here in the fly over states.

How has our country gone so dangerously off the tracks? it seems that nothing will matter and no one in public office will ever have to pay a price especially if the have a (D) following their name.

Looking back on poor Richard Nixon now those few minutes of lost tape don’t seem so offensive compared to 30,000 some odd emails that were deleted form Mrs. Clintons server by lawyers that NEVER had a security clearance.

Sadly, I think like anything else you get so much corruption and scandals and you eventually become numb. So far I have NOT become numb and am appalled by Mrs. Clintons e mail debacle. What horrifies me more is that the majority of Democrats out there could care less about her wrong doing. Shame on all of you for being so complacent about our national security.

Mr. Trump may be a lot of things but nothing he has done so far seems as dark and seedy as the continuing antics of the Clintons who left the White House broke and now have amassed over 200 million dollars doing nothing but giving speeches and building a fortune off of politics. They must sit in Chappequa every night smiling and toasting each other at their ability to bamboozle the American public. Bill must be licking his chops at the thought of exploring more dark corners of the White House with some unnamed intern as Hillary figures out how best to keep her thoughts and words away from the American people.