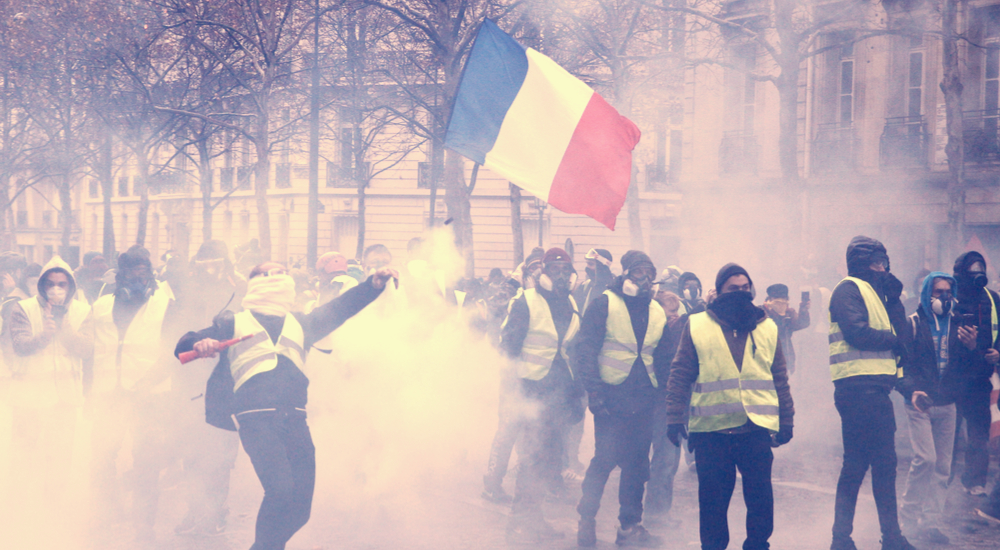 You really have to wonder about the French people. Their president makes a bold move to save the world and his people are in the streets wearing yellow vests so that the world can see the yellow stripes up their backs because of what? Because they want to see the world end? Well, I guess if you’ve garnered a reputation as being surrender monkeys for the last century or so you just want it all to end. Didn’t these clowns vote this guy into office? Now I know what Ron White meant when he said: “stupid is forever.”

France was just about to save the world and become the de-facto leader of the world when all those barely washed masses started crying foul because they might have to contribute. Did they think the money to fight climate change grew on trees or something? I mean who cares how much money it costs it’s about saving the planet.

Of course, none of this has to do with climate change or saving the planet.

The truth here is that the French government is desperate for money. Did you really think that a country that takes naps in the middle of the afternoon during the workday had the money to pay for all those “refugees”? Of course, globalists can’t come right out and say “we need more tax dollars for our invaders.” That would expose their plans as unsustainable. Nothing like a bit of virtue signaling to get people to cough up some more of their lazily earned money. Global climate change should have been the perfect patsy but it wasn’t.

See migrants suck up a lot of money. Even more than the citizens who can’t work for one reason or another. Frankly, they need a lot more services. In the coming months, it will be exposed that these migrants are plunging their host nations into insurmountable debt which clearly Macron is desperate to avoid.

So where has Macron been lately? He doesn’t want to hear the protests. He can’t. Leaders usually know long before anyone else when their country has serious financial difficulties and it is probably do or die for France right now. He has to get more money and he has to do whatever he can to get it or Frances economy might crash under the weight of migrant entitlement. And frankly you don’t have to be a rocket scientist to figure this mess out but even one of my favorite YouTubers Black Pigeon Speaks couldn’t see it when I briefly chatted with him during a Coach Red Pill live feed.

Macron is out. Whether he manages to survive until the next election cycle or not is the only question that remains. Democrats want to impeach Trump even though his ratings double Macrons so what chance does that guy have as his streets fill with citizens demanding his ouster?

The Yellow Jacket movement, yellow jackets because in places like France it is mandatory to have 2 of those jackets in your car, is spreading across Europe like a California wildfire in a poorly managed stretch of the forest. To date, similar mass protests have erupted in 4 more countries all with the same core problem migration. If this movement continues to spread throughout Europe it will be the end of globalism for the time being and this is likely as most Western European countries are just overrun with Africans and Arabs.

With all of this exploding in Europe you might think Americans would suddenly realize the folly of mass migration but you’d be wrong of course. Somewhere around half of the nation supports the Democrats call for open borders and communism. They must because they are still voting for them. Or at least their dead relatives are (several times).

This is a glimpse of the future of every western country that fails to take the red pill.