Why Fox News Polls are Biased in Favor of Hillary Clinton The FOX News poll methodology is so obviously flawed that it’s value as a true indicator of the election outcome is highly suspect. Perhaps the real reason these Clinton-skewed polls are being hyped so much is to lay a foundation for sufficient vote fraud to legitimize fraudulent results by virtue of their consistency with seriously flawed pre-election polling.

On more than one occasion recently, I’ve been left wondering why the periodic FOX News Poll is so dramatically inconsistent with daily tracking polls whose methodologies are rigorous and which have demonstrated a high degree of success forecasting past elections. I decided to see what I could learn about the FOX News Poll and discovered the FOX News poll methodology online (H/T Google).

Analyzing the FOX News poll methodology, I discovered several highly questionable practices that seriously question whether the poll has any validity at all. These discoveries may explain the poll’s inconsistency with well-established superior polling methodologies (LA Times/USC and Rasmussen).

Let’s examine some of the more apparent problems with the FOX News Poll.

Quotations below are from the FOX News poll methodology page.

Concerning a critical requirement (weighting) for obtaining an unbiased result, this is what FOX News polling has to say:

“When necessary, minor weights are used to ensure the demographics of survey respondents are representative of the national registered voter population (as measured by the national exit poll). Generally, weights are only applied to age and race variables. The Fox News Poll is not weighted by political party.”

Evidence that indicts the FOX News poll and similar casual periodic polls include the much more rigorous polling of the LA Times/USC and Rasmussen daily tracking polls that have consistently shown Trump leading Clinton.

In the LA Times/USC poll, each day is an average of the prior week’s polling. This tends to smooth out errors that come from sensationalist news dumps and salacious accusations that tend to spike the more casual periodic polls (FOX News, Washington Post, New York Times, etc.). These additional facts emerge from the LA Times/USC poll: 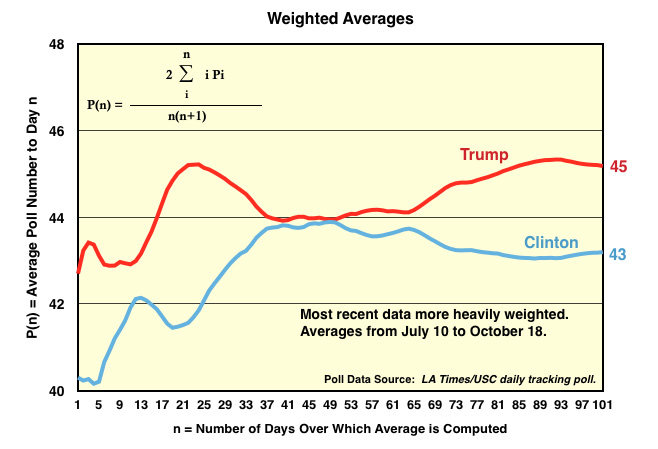 Note that at no time throughout the LA Times/USC daily tracking poll, has HIllary Clinton’s weighted average matched or exceeded Trump’s for any date.

These findings from the LA Times/USC daily poll contradict the casual periodic biased polling by “news” organizations that routinely oversample Democrats to achieve a desired result that is designed to create a false illusion of Clinton’s “strength” that flies in the face of strong indicators of significant entrenched support for Trump and an entrenched weakness of Clinton.

Compare these findings with the flawed FOX News polling and one has to wonder just what FOX News is trying to accomplish with its polling?

FOX News should to take a hard look at how it conducts its polling.