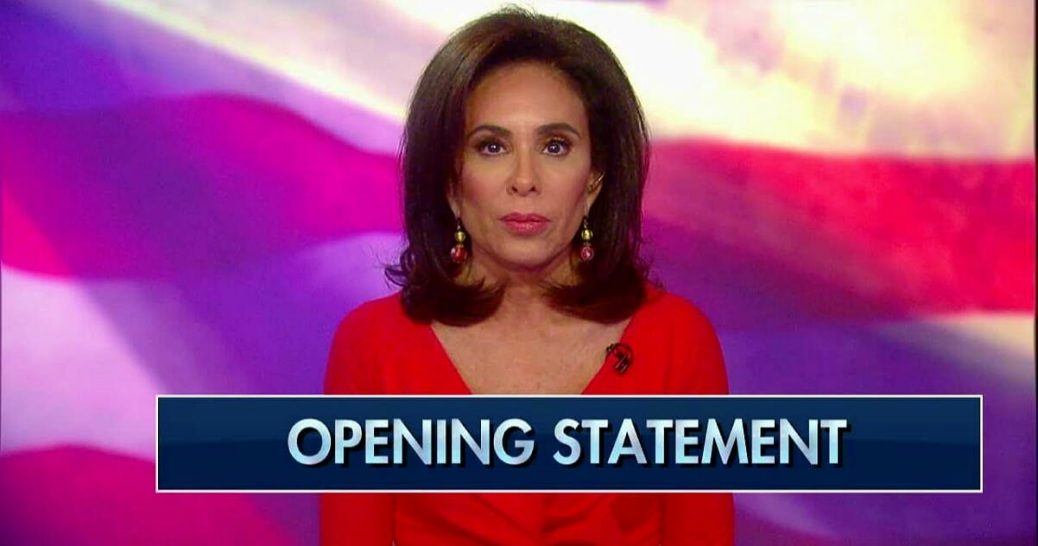 I must comment on the latest FOX News blunder.

Judge Jeannine Pirro, one of my favorites on the FOX Network, did not, in her most recent episode, personally malign or insult anyone that did not deserve her words, in my opinion. The very person she was referring to has been allowed, as a Public Representative in our Congress, to malign others, including our Allies and friends; she has been allowed to harshly criticize our Constitution, our way of life, and our values and principals.

This young lady was elected by a certain group of voting Citizens, from a certain State, to represent them in the Legislative process of our Constitutional Republic. She was not elected to change or restructure our Laws, our values, nor our principals; unless instructed by her Constituents, not an outside faction. Is she truly speaking for those who elected her or others?

Was Judge Pirro suspended because she is Female, or were we, her followers, being deprived of her courage and outspoken honesty simply because she was picking on a particular group?

Why doesn’t FOX show more respect and support for their commentators? Are they joining the ridiculous Media bloc that is apparently setting out to create unrest, anti-Trump, and anti-Government rhetoric? This is our President they are maligning, and allowed to say just about anything they wish, without being criticized or denounced by FOX media; yet, when one of their own voices an opinion, they hop on the bandwagon of such dissidents.

I welcome all vetted Immigrants to our Country; those who seek freedom from oppression, those who come to improve their lives, and those who may possibly add to our lives as a Nation.
I am beginning to sense fear being exhibited by a surprising number of people. What exactly is going on? Is there something we have missed; are we purposely being distracted?

Speaker Pelosi seems to have dropped back quickly and quietly with no explanation. And where is Senator Schumer? He has become noticeably quiet. It seems to appear that many of the Representatives in our Congress, along with most of our Media, are quite happy to allow the unprecedented attacks on our President, on our Religions, on our Education system, and our way of life, but pass over lightly the subtle changes that are being put into motion. It appears, in my opinion, that a certain bloc of immigrants is hell-bent on destroying our Constitution and changing our Laws. And our Bureaucratic red tape is becoming a hindrance to those who are fighting to maintain our Republic and the system of Government given to us by our Founders; by those who have given their lives to protect and preserve the American way of life, the “American Dream”.

What is going on Folks? Something is not right.