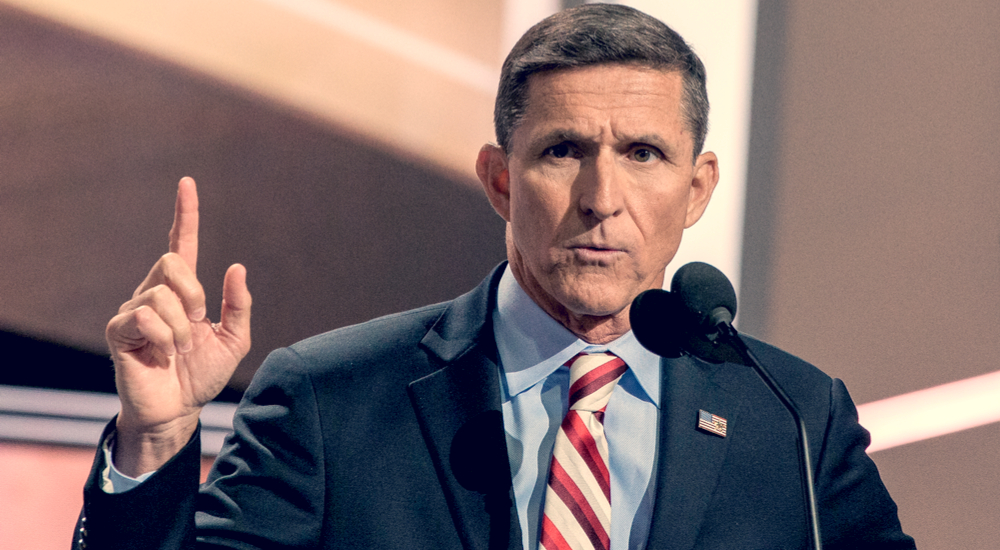 In DC Federal Court Judge Sullivan noted General Flynn was an unregistered agent of Turkey, a foreign country, while in the White House. Not registering is a common practice in Washington, DC as it restricts registered agents from doing business with Congressmen as they vote on financial issues and has never been prosecuted as it would end a major corruption. Mueller may cause this to change and that will end his career, if not his life. Such is The Swamp.

No one has been prosecuted for violating this law. Judge Sullivan angrily pointed to the furled U.S. flag in his courtroom. “Arguably, that undermines everything this flag over here stands for. Arguably, you sold your country out!” Sullivan said. “All along you were an unregistered agent of a foreign country while serving as the national security advisor to the President of the United States!”

The next day Judge Sullivan rescinded his remarks likely after having heard from a number of K Street lobbyists and Congressmen recipients of dark money in their offshore number accounts. General Flynn pled guilty a year ago, telling Judge Sullivan he had lied to the FBI and he was out of money to defend himself.

Remarkably, Flynn’s lawyer, Robert Kelner, when asked if the FBI had engaged in any misconduct, violating Flynn’s rights in the interview, said they had not when they clearly had! They had recordings of his conversations and if a crime had been committed they would act. That they wanted an interview and told him not to get an attorney means they were trying to entrap him.

This gives General Flynn a cause of action with punitive damage potential in the tens of millions! Kelner’s response is a measure of the depth of the swamp! Kelner is in it! It is a hole to Hell! Attorney Kelner is the man Flynn has been paying $840 per hour to the point that Flynn had to dispose of his savings, investments and home to pay Kelner!

In his pre-sentencing remarks, Judge Sullivan said, “This is a very serious offense. A high-ranking senior official of the government, making false statements to the Federal Bureau of Investigation while on the physical premises of the White House,” indicating the Swampsters have warned Judge Sullivan he had better “toe-the-line.” Then Judge Sullivan returned to his principles, got back on track and put the sentencing until March! He is giving Flynn a chance to realize, or be told, of the opportunity he has for deep revenge dripping in Dollar signs!

Five of Trump’s former aides and associates, including his former campaign manager, Paul Manafort, and his former New York lawyer, Michael Cohen have pled guilty as part of the investigation led by special counsel Robert S. Mueller III who has a long-standing reputation for immoral behaviors in his career.

It began in 1970 in his first case in San Francisco where 18 accused drug runners got off as Mueller had manipulated the evidence and got caught! Same story in Boston where Mueller fumbled three cases that resulted in the death of two innocent men he sent to prison and over $150 million in compensation settlements being paid for Mueller’s errors and crimes for which he was never held responsible!

Flynn, 59, worked in the White House and had access to some of the government’s most closely held secrets as national security advisor, however: Under federal sentencing guidelines, Flynn could face six months in prison.

Mueller recommended Flynn be spared imprisonment because his 33-year military career and “substantial assistance’’ to prosecutors in three separate investigations, including the probe into possible coordination between Trump’s campaign and the Kremlin-backed effort to interfere in the 2016 election, but anything Flynn would have to say about political matters would have to be invented as he was working with national defense issues only! Any such actions would further drag him into Mueller’s conspiracy!

That entire construct has collapsed while Flynn’s problems with Turkey remain. There is little chance Mueller can leverage that given Sullivan’s actions. Meanwhile Mueller’s actions have given him vulnerabilities in the realm of “Abuse of Process,” “False Arrest,” and on with a multi-million Dollar pay day for Lt. General Michael Flynn who may be getting a very big, tax-free check as well as plant Mueller where the strings with which the Deep Swampsters have controlled Mueller will have yanked them over the great wall of the US Constitution as Flynn can fight back.