Fixing Illegal Immigration Would Solve Many of our Problems

Most polls in the US will show that people are most concerned about the economy, national security and immigration, in that order. As I thought about and researched the immigration issue, legal and not legal, it occurred to me that all three are interrelated to a large degree. This is especially true regarding immigration’s impact on the economy and national security.

I have also observed that where people stand on legal and illegal immigration varies due to a variety of factors, except for politicians and people who are active politically. The people in the last groups, politicians and politically active people, usually fall into one (sometimes two) of the following three categories: ideological, self interest, or what they believe the majority of the American people want. This is of course another huge topic for discussion in itself and will be the subject of one of my post in the near future.

An in depth look into our “legal” immigration system revels that it has been turned into a typical government bureaucracy. Mismanaged at every level and so corrupt that it is deliberately misused for financial and political benefit for a variety of people and special interest groups.

There are hundreds of thousands of people “legally”(?) admitted to the US each year (over 500,000 on student visa’s alone). I had no idea there were so many different types of visas. There is very little, if any, background checking done and little to no follow up to see if they are actually doing what they were admitted to the U.S. to do, or if they went back home when their visa expired. Examples are student visas where they are registered to attend classes at “approved” schools. Some of these schools do not have instructors, class rooms, on-line classes or staff. Only a small number of these schools have been busted and those were the result of tips from concerned citizens. Obviously these “students” are doing something else, like taking jobs from U.S. citizens. There are literally millions of people here illegally and very little is being done to follow up by DHS or any other agency. In fact people who overstayed their visa are a large percentage of the 11 to 12 million people that the politicians admit are here illegally. It is also important to note that some people claim that the number of illegals in the US is significantly larger than 11 to 12 million (“!ADIOS, AMERICA!” by Ann Coulter).

With some classes of visas the approved applicant can even get visas for their spouse and family members under 18 years old.

Many U.S. companies, like Facebook and Microsoft are spending millions to get some of these visa programs expanded. They want them expanded so they can hire increasing numbers of these immigrants at as little as one third of what they are, or would pay Americans. Additionally in many cases the immigrants do not get any company provided benefits or pay into our systems like SOC, Medicare, etc. This is another financial incentive for companies to replace American workers with these immigrants. A large number of these immigrants and illegal immigrants add to our tax burden by taking advantage of our social safety net. Examples are sending their children to public schools and using hospital emergency rooms for medical care. Many companies like Disney World, California Edison and others are openly replacing American workers with low paid, low skilled immigrants and forcing the Americans to train their replacements or be fired. If they chose to be fired they are not eligible for unemployment or any severance package that may be offered when they are let go. 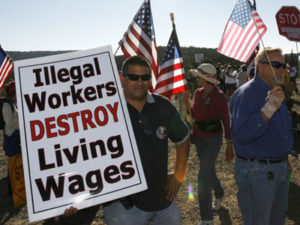 There are actually companies and people (agents) here and in other countries like China, India, and Indonesia that are making a fortune charging fees to help people get visas and serving as employment agencies for American companies to help them get around U.S labor laws or they simple ignore the laws. There are a number of lawsuits filed in Federal courts by various groups of people who were replaced this way but they will be tied up in courts for years. Apparently it is cheaper for the companies to pay lawyers than to pay the displaced American workers.

This is part of the reason that our real unemployment and underemployment rate is probably somewhere around 20 plus percent. It is simple math. You need a net of about two and a half million new jobs per year in the U.S. for the unemployment rate to just stay the same due to the number of people who turn 18 in the U.S. each year (2010 US census data). The math simply does not add up when you add this to the number of immigrants the Government allows to enter the US each year on visas.

I actually know a lot of people who have been a victim of this “outsourcing”. One has worked in administration/data processing for the same company for 42 years. It has merged and been bought out a number of times over these years but she still worked at the same location. She turned 60 in January. Her department is being outsourced this month (March 2016). They were told about this in mid-December. She is also a cancer survivor. There is no chance she will get another job other than something like part time work at Walmart. My former employer did the same thing last August. They “outsourced” jobs and functions, laid off hundreds of people nationally and shut down and liquidated facilities. The majority of these people were career employees who had worked for this company their entire adult life. They got a small exit package and were eligible for a maximum of 14 weeks of unemployment only if they stayed through the outsourcing and facility liquidations.

The abuses of these programs have been going on for a long time to some degree but have become dramatically worse during the Obama administration. Some of these abuses were made possible by decisions and changes made to the programs by bureaucrats, not Congress (sound familiar?). Remember it is impossible to fire a federal employee.

The expansion of one visas program is beneficial for the US. It is the one used to allow unskilled, seasonal migrant workers into the US .They pick the fruits and vegetables and do other manual labor jobs.There is a shortage of people who will, or are physically able to do this back breaking work and live in the conditions that they do as they move from job to job. Last year there was a Fox News special report featuring farmers in Southern California where crops were rotting in the fields because they did not have enough people to harvest them. About that time The Governor quietly lifted California enforcement of state and federal laws regarding these people. Have you noticed the price of red and yellow bell peppers, orange juice, etc. in recent years? This is the one visa program with the least amount of fraud because there is less money there to attract corruption. Unfortunately the companies and special interest groups are using the shortage of workers in this group to attempt to justify the need for bigger numbers in the programs they want. There is not really a reasonable comparison here but they are using it successfully.

As I noted above I had no idea how many different programs there are. Here are some of the worse:

EB-5 (yes the 5 means there are 5 versions of just this one). It allows wealthy foreigners who are willing to “invest $500,000 to $1,000,000 in a new business in the US, or expand an established business to create or maintain jobs” get to come to the US, and bring their families with them with a pathway to citizenship. You can see from the language how easily this one can be manipulated. One example is Terry McAuliffe (yes that one.) The Clinton insider who became the Governor of Virginia after the DNC and the Clintons came in and literally bought the election for him when he was running way behind. He sought and got some of these EB5 investors to invest in the electric car company where he was a partner (Clintons and huge amounts of illegal foreign money again). The company failed, No accounting for the money, no follow up on the jobs created or maintained.

L1. Expanded by Obama by executive order. This one allows foreign companies to transfer their workers to the US to fill US “job vacancies”. They are not actually considered to be US company employees. No surprise, India and China are really involved in this one.

It should also be noted that many of the people who get visas under some of these programs also get a pathway to citizenship. Want to guess if they become devoted voters and which party they will consistently vote for?

The bottom line is that millions of American workers are permanently unemployed or underemployed as a result of these programs. And the abuse is expanding.