The Fix Is In: University Caught Lying about Global Warming to Defraud Taxpayers! 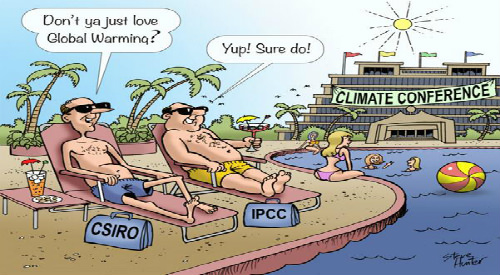 By Steve Hunter at http://www.stevehunterillustrations.com.au/political-cartoons/

A global warming research center at the London School of Economics got millions of dollars from UK taxpayers by taking credit for research it didn’t perform, an investigation by The Daily Mail revealed.

The UK government gave $11 million dollars to the Centre for Climate Change Economics and Policy (CCCEP) in exchange for research that the organization reportedly never actually did.

Many papers CCCEP claimed to have published to get government money weren’t about global warming, were written before the organization was even founded, or were written by researchers unaffiliated with CCCEP. The government never checked CCCEP’s supposed publication lists, saying they were “taken on trust,” according to the report.

“It is serious misconduct to claim credit for a paper you haven’t supported, and it’s fraud to use that in a bid to renew a grant,” Professor Richard Tol, a climate economics expert from Sussex University whose research was reportedly stolen by CCCEP, told The Daily Mail. “I’ve never come across anything like it before. It stinks.”

From 1988 to 2000 the United States government spent $550 billion promoting “anthropogenic global warming” by offering grants on the subject of atmospheric science.  They only funded those that promoted the concept “man’s activities are responsible for the destruction of the atmosphere and planet.”  Any paper saying otherwise or “putting the lie” to the concept was ignored.

If the Federal government only continued funding at the 1988 AD to 2000 AD rate they have added another $733 billion for a total of $1.28 trillion, but we believe it is even more.  Nonetheless, the American people remain unconvinced as surveys of their concerns always find this issue is last and if it is not listed it is not mentioned. For this reason the elected ruling class has insisted it be taught in the schools as fact and the Obama Administration now wants to make disbelief a felony and put a number of “man-caused climate change deniers” in prison “as examples!”

This is truly the beginning of a new Dark Age where in physical science, Chemistry and Physics, there are no books or teachers.  We will have printed things that look like books, men and women that look like teachers, but they will spout politically correct nonsense. Their students will learn nothing and our great nation, like all other empires will fail.  None have lasted longer than 250 years and we are 240 years old this year.

One month ago we sent a paper about a demo-experiment any junior high school science class can do with an empty soda bottle, a lab thermometer, 1/4 tsp of baking powder and a few drops of “White Distilled Vinegar” to the 15 US Senators.  It shows very clearly that adding CO2 to the atmosphere causes a decline in temperature in accord with the Le Chatelier Principle, a pillar of chemistry, explaining it thoroughly in terms 14 year-olds would understand.  We have not received one response.  The fix is in.