Finally: How the Russia Investigation Began 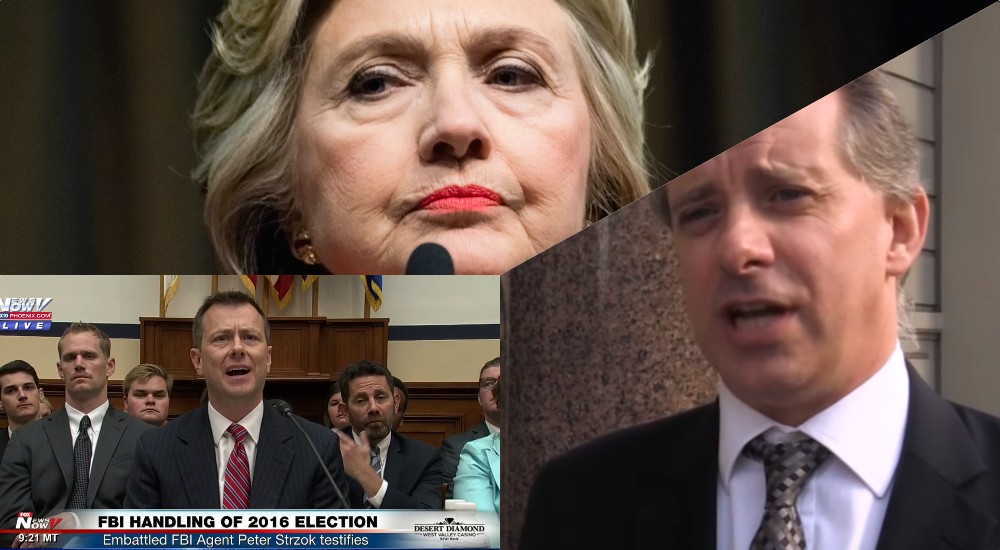 We are finally starting to get a bit of clarity about something very important, namely, how the Russia Collusion investigation ever even began.

This is an important point because it now seems that there was never any “there” there. What was all the smoke that the media kept talking about? Why did the intelligence community believe that there were serious reasons to be worried when in the end, none of it proved to be a problem? What got them worrying about all of this in the first place?

It’s looking more and more like the impetus to all of this was a corrupt FBI agent who hated Donald Trump (and loved Hillary Clinton), and a ridiculous dossier that was bought and paid for by the Clinton campaign and the DNC.

This is not how our justice system is supposed to work.

Earlier this week, FBI Director Christopher Wray confirmed that he would be working with Attorney General Barr to get to the bottom of how the investigation began and to make sure that everything was done ‘by the book.’

Hopefully, this will answer all of our questions and put this constant hand-wringing about our nation being in the midst of a ‘constitutional crisis.’

“The special counsel’s report goes through a fair amount of detail about the predication for its investigation. Beyond that, as I mentioned to the chairman, I have had a number of conversations and am working to help the attorney general get to the bottom of an understanding of what the circumstances surrounding the initiation of that investigation were at the department and the FBI back in 2016.”

John Kennedy: I want to talk to you for a second about 2016. I think we can agree that, at least this is my opinion, that the FBI is the premier law enforcement agency and all of human history. And I think most Americans and most of our friends across the world believe that as well. Unfortunately, there has been created a perception that given the two investigations of presidential candidates in 2016 that some members of the FBI allegedly acted on their political beliefs and I think it is important that we get rid of that perception.

Christopher Wray: I don’t know that I can say sitting here today what the predicate is. As you mention the independent inspector general did a fairly intense and rigorous and thorough investigation of that investigation and provided a pretty long report and testified in front of multiple committees of Congress about it. There were a lot of important lessons learned from that and I think we be FBI and I at the helm took those lessons very much to heart a immediately. Some of them we already–

John Kennedy: Sorry to interrupt you Mr. Director but I’m going to run out of time and I don’t want to do that. Can you tell me what the factual predicate was for the investigation of President Trump?

Christopher Wray: Well, the special counsel’s report goes through a fair amount of detail about the predication for its investigation. I think beyond that as I mentioned to the chairman, I have had a number of conversations and working to help the attorney general get to the bottom of an understanding of what the circumstances surrounding the initiation of that investigation were at the department and the FBI back in 2016.

John Kennedy: Why don’t you just–I know you can do this on your own but the president can, the president could–could declassify with proper reduction all of the documents that the FBI pertaining to the 2016 investigation of Secretary Clinton and President Trump and then let the American people see them and draw their own conclusions? Why don’t we do that?

Christopher Wray: Well, without weighing on the legal question of authority certainly I would tell you that when we reject information or when we classify information there are a number of very, very important principles that are at stake there. Protection of sources and methods which without which Americans are less safe, protection of ongoing criminal investigations or other investigations without which the American people are less safe and there are various other legal issues implicated that go beyond just the power to declassify.

So while I think it is important that we be as transparent as we can be with the American people and certainly with the Congress, I also think it is very important to protect those kinds of information that are the lifeblood of our inability to fulfill our mission.

John Kennedy: What are we going to do then Mr. Director, how do we remove this perception that there were a handful of people at the FBI and at the Justice Department in 2016 that acted on their political beliefs and try to influence the election? How are we going to lance that boil and I’m talking about both with respect to the investigations of Mrs. Clinton and Mr. Trump?

Christopher Wray: So as to both matters one case already completed, the other case still underway there have been independent, so outside the FBI inspector general investigations that are professional, that are apolitical, that are rigorous, that are sometimes quite painful for the agency in question and we have taken a number of steps to learn those lessons from the Clinton email investigation, there have been personnel moves, training improvements, policy impairments, all sorts of things that I laid out in great depth last summer in response to that investigation. And I would expect that we will take to heart in a very similar way whatever lessons are conveyed through the other inspector general investigation which is pending.

But as to the perception I think it is important for the American people to understand and you alluded to it in your very helpful comments at the beginning that we are talking about two investigations, two investigations over about a 15 month period –as opposed to the thousands and thousands of investigations that the FBI does to keep Americans safe that are conducted by 37,000 men and women that in my experience are brave, professional, rigorous, thoughtful, and I think deserve better than some of the commentary that has been out there. And so, I appreciate your comments about the efforts in New Orleans where there have been some really remarkable efforts made. And I think it would be helpful for everyone to take a deep breath and remember that we’ve had more than two investigations over the last two years.