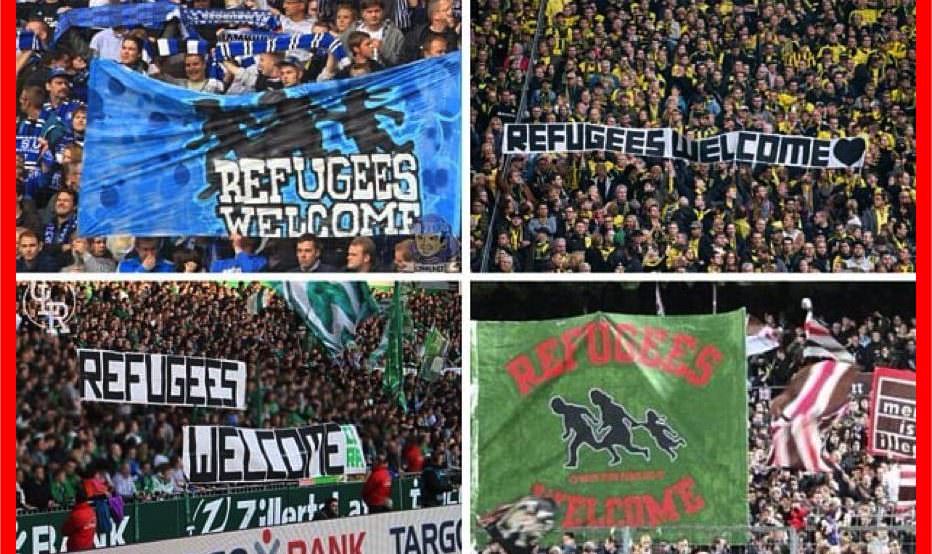 Of course, President Trump is right. Remember the “Welcome Refugee” banners the Germans waved just two years ago? Well, read what has happened.

Hospitals are overwhelmed by Refugees and cannot continue to provide care for taxpaying Germans:* A female doctor has stated that German hospitals are struggling to deal with the number of refugees. The doctor, who wished to remain anonymous, wrote to the press back home in the Czech Republic, to express her shock at the “unsustainable” situation which she says is now affecting the medical care received by taxpaying Germans.

The Refugees refuse to be cared for by Female Medics: The female doctor said the German health service has been completely overwhelmed by the influx of Muslim asylum-seekers who are refusing to be treated by female medics. Relations between the staff and migrants are going from bad to worse and we women are now refusing to go among those migrants!

Migrants stabbed a Doctor & Nurses when a child they had neglected died in Hospital. The Migrants were not punished: In one shocking incident medic also claimed how migrants stabbed the doctors who tried to save a tiny eight-month-old baby, which had been “dragged across half of Europe for three months.” She said: “The child died in two days, despite having received top care at one of the best pediatric clinics in Germany.”

“One injured physician had to undergo surgery and two nurses are laid up in the ICU. Nobody has been punished.” “What would have happened to a German if he had stabbed a doctor and nurses with a knife? Or if he had flung his own syphilis-infected urine into a nurse’s face and so threatened her with infection? At a minimum he’d go straight to jail and later to court. With these people – so far, nothing has happened.”

Liberal Media cover up and downplay migrant crimes, even rape and murder. The doctor says “the local press is forbidden to write about it, so we know about it only through email.” But the police have revealed that crime rates have skyrocketed; with migrants committing 142,500 crimes in Germany during the first six months of 2016 alone.

Clinics are shipping hostile refugees to Hospitals: She said: “Clinics cannot handle emergencies, so they are starting to send everything to the hospitals.”

Police with K-9 Units must accompany migrants to Hospitals: “Since last weekend, migrants going to the hospitals must be accompanied by police with K-9 units.”

Migrants have AIDS, Syphilis, open TB and other diseases long since eradicated in the West: In a furious outburst, the experienced doctor said hospitals simply cannot cope because so many of the migrants require treatments for diseases long since eradicated in Europe. “Many migrants have AIDS, syphilis, open TB and many exotic diseases that we, in Europe, do not know how to treat them. And which they risk passing on to locals.” “For now, the local hospital staff has not come down with the diseases they brought here, but, with so many hundreds of patients every day – this is just a question of time.”

Migrants abandon their sick children when asked to pay for their medications: “If they receive a prescription in the pharmacy, they learn they have to pay cash. This leads to unbelievable outbursts, especially when it is about drugs for the children. They abandon the children with pharmacy staff with the words: ‘So, cure them here yourselves!’ So the police are not just guarding the clinics and hospitals, but also the large pharmacies.”

At least 1 in 10 Migrant women are already Pregnant: And she added that the burden on the country’s failing health service will only get worse because at least one in ten of the women arriving are pregnant. Hundreds of thousands of them have brought along infants and little kids under six, many emaciated and very needy.

Her remarks provide a shocking warning about what could happen to our NHS if huge numbers of migrants were allowed to enter Britain and to the American Healthcare System if mass migration of refugees is not stopped.

Migrants are uneducated, do not speak the language, are unemployable and violently demand money: She said that the estimated 1.3 million migrants who have entered the country are unemployable. Until now, the number of unemployed in Germany was 2.2 million. Now it will be at least 3.5 million. Most of these people are completely unemployable. Only a small minimum of them have any education. What is more, their women usually do not work at all.

She said: “Even the professor who heads our department told us how sad it makes him to see the cleaning woman, who for 800 Euros cleans every day for years, and then meets young men in the hallways who just wait with their hand outstretched, want everything for free, and when they don’t get it they throw a fit.”

Migrants are Extremely Violent and contemptuous of Germans: She also said, “You – who have not come in contact with these people, have absolutely no idea what kind of badly behaved desperados these people are and how Muslims act superior to our staff, regarding their religious accommodation.”

Aid Workers who gave a warm welcome are nowhere to be seen: In a scathing attack, she also savaged aid workers who turned out with ‘Refugees Welcome’ banners to provide food and clothes to migrants crossing the German border, accusing them of profiteering from the crisis. She said: “If it were up to me I would round up all these greeters and bring them here first to our hospital’s emergency ward, as attendants. Then, I’d put them into one building with the migrants so they can look after them there themselves; without armed police, without police dogs who today are in every hospital here in Bavaria, and without medical help.”

The WHO claims nobody asked them for help, so there could not be any problem in hospitals: However, A World Health Organization (WHO) spokesman refuted claims that German hospitals were struggling to cope with the number of refugees. He said: “No country which is receiving refugees has come to the WHO for assistance or to ask for backup. They have been telling us that their systems are coping with this and all is fine. WHO is carefully monitoring the situation and is on hand to provide assistance when required.”

The WHO also claimed that though 80% of Iraqi and Syrian refugees had latent Cholera, the Western water systems are safe, so there is no problem: The WHO spokesman also said there were some concerns about cholera coming to the West from Iraqi and Syrian refugees, particularly because in 80 per cent of cases it does not show symptoms, but that in a normal, Western city, cholera would not be a big problem because cholera spreads through the water system and Western cities have safe supplies with sewage and drinking water pipes completely separate.

Is this “situation” coming to our country? Yes! Absolutely! Unless we stop these immigrants from coming into our country. Do not let the Muslim Brotherhood, Obama, Hillary and the Democrats lie to and trick us any more. Support President Trump.

“If You Do Not Take An Interest In The Affairs Of Your Government, Then You Are Doomed To Live Under The Rule Of Fools.”- Plato

Refugee’s Arrest Turns a Crime Into National News (and Debate) in Germany https://www.nytimes.com/2016/12/09/world/europe/refugees-arrest-turns-a-crime-into-national-news-and-debate-in-germany.html?_r=0

Angela Merkel under more pressure over refugee policy as it is revealed migrants committed 142,500 crimes in Germany during the first six months of 2016 http://www.dailymail.co.uk/news/article-3893436/Angela-Merkel-pressure-refugee-policy-revealed-migrants-committed-142-500-crimes-Germany-six-months-2016.html#ixzz4cN22eTZY