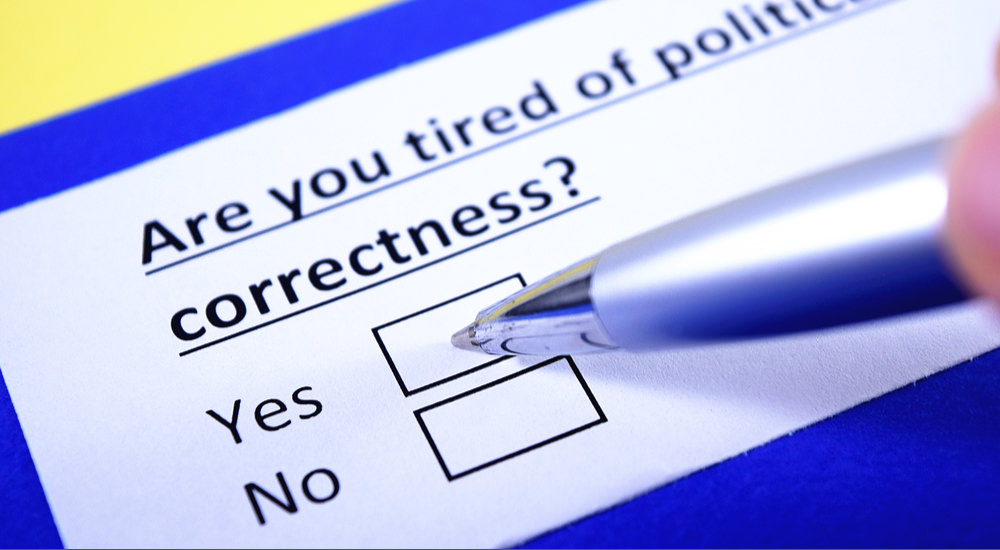 To liberals, and those claiming to be progressive in particular, words have much greater meaning than actions. The left is controlling the narrative. Conservatives are being persecuted and prosecuted for holding beliefs which are honest and thus normal. Progressives, on the other hand, riot and destroy in the name of protest against what should be standard words and actions. A simple cry of racism immediately and unjustly ostracizes the object person.

Some of us are always going to be unjustly admonished and belittled for such things as “cultural appropriation”, or “covert racism”, or “xenophobia” or “micro-aggression”, etc. Apparently, we do it unwittingly because we’re so self absorbed that we cannot see, or simply don’t care, who may be disparaged. Careless and thoughtless language obviously displays our innate bigotry.

On any given day, a delicate pastel seeking reason to cry may choose to selectively re-identify a particular word, gesture or expression. There’s no telling where or when this might happen (It is generally done after the fact). But when it does, the dainty one is immediately insulted and horrendously aggrieved to the point of tears and quaking. Thus, we must succumb and complete the cycle. It is the only route to peace and harmony between us and the wailing and frangible few.

Beyond the obvious, like tight pants and the showing of well muscled (male) players, there is overt aggression displayed in the naming of sports teams. Let’s run down a few of names that must be changed starting with the NFL. Feel free to rethink the name of your favorite sports team.

EAGLES – Birds of prey. Carnivorous. Let’s change that name to PARAKEETS. The smaller birds are herbivores eating only seeds and grains.

BEARS – Large, aggressive carnivores capable of ripping off one’s head with a single swipe. This team must become the TEDDYS.

REDSKINS – This has been overdone. Native Americans don’t seem to mind the name, but pastels do on their behalf. Leave the name alone.

CHARGERS – Whoa, unbridled aggression. How about TROTTERS to show advancement without vigorous onslaught. We can only hope no Tennessee Walkers feel excluded.

PATRIOTS – Showing honor and allegiance must be abolished. Replace this name with DIPSY DO-GOODERS.

TEXANS – Far too exclusive. Must be renamed the DIVERSITIES to offset years of exception.

And there we have a sampling of idiocy, aka; political correctness. Perhaps tomorrow we’ll destroy schools, states, cities, roadways or regional identifications named after historical figures with whom the left does not agree.