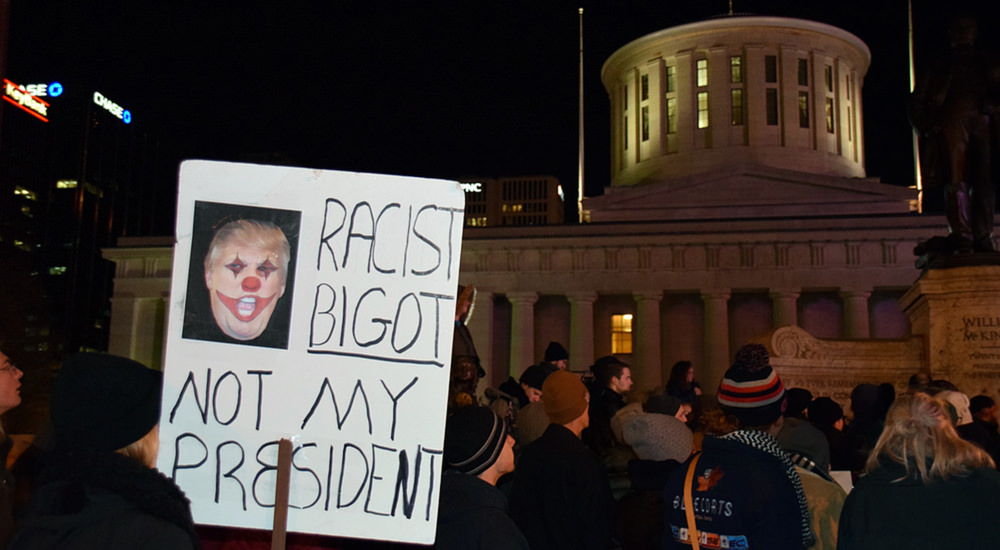 Let it be known, that 65 million Americans voted for Donald Trump. Not only did they elect Trump, they also elected a Republican majority in the House of Representatives and the United States Senate. There was no Russian interference in the election, there was no vast right-wing conspiracy and there was none of the nonsense which the radical leftists are spewing as their excuse for why Trump won the election and not them. The truth of this matter is that America was tired of the failed policies of a supposed “progressive” regime in the Obama administration, and they elected someone who genuinely seemed as though they would be representative of The People of The United States of America and provide the nation with a secure, prosperous and free future.

It is scary to know that the failed so-called “leaders” of this nation are willing to stoop to such a low-level as they have. They are repeatedly and ambiguously telling the American people lies regarding Russia’s influence on the election, which could potentially start a shooting-war between these two nations. The rhetoric coming from some officials is astounding, as they put the American people in direct danger. This, however, is clearly not the sentiment of the American people; rather it is the sentiment of dictator want-to-be and power-hungry fascists, whom currently hold positions of power in the United States of America. The dangerous part of the rhetoric is that some people in the population believe what these liars are saying.

They have kept supposed “secret dossiers” on Donald Trump showing him supposedly hiring prostitutes to urinate on a bed which had been slept in by the Obama family at some point in history.  Ironically, it was an establishment Republican, Senator John McCain, who played this close to his chest as if it were some sort of “Trump-Card.” Too bad for these treasonous actors like McCain, the report turned out to be entirely false and cooked-up by some private investigator turned political bag-man. This guy had originally been hired by Jeb Bush and later ended up working for Hillary Clinton in an effort to find “dirt” on Trump. The lengths that these lying criminals would go to in order to stop Trump has become desperate, childish, and downright embarrassing for The People of The United States of America. However, just as with the rest of the establishment lies and propaganda spewed all over their state-run media, the American people are NOT buying the horse manure and the days keep ticking down to the inauguration.

So what comes next in this attempt to subvert a legitimate election? A group called “DisruptJ20” (among many other radical left groups) are a group planning to disrupt the inauguration any way they can and they seem to have every intention of creating violence and spreading civil unrest across the city of Washington D.C. They plan on blockading roads into and out of the city. They are planning a protest outside of Mike Pence’s home in Maryland. In some leaked audio obtained by FoxNews, an individual planning on protesting claimed that they are going to “crash” the Deploraball, which is a Ball for Trump supporters to celebrate the inauguration. An organizer at DisruptJ20 was also quoted as telling protestors that they cannot legally tell protestors to commit violence; however they encouraged protestors to “have fun.”

Have fun? Violently protesting the legitimate election of Donald Trump? What sort of message does such a statement send to idiotic radicals who haven’t the first clue about how this nation is supposed to be governed? What are they REALLY protesting? The fact that they will now have lower taxes, better jobs, a better economy, a secure southern border, reformed immigration policy? Why can they not “have fun” with their new and improved job-market, or lower taxes, or less federally mandated taxes and services? I guess they would rather have no freedom, prosperity or freedom in their version of America, and they are seemingly upset that Donald Trump wants these things for the American people.

Let me, for a moment, revert to the point that more than 65 million Americans elected Donald J. Trump and it was because he promised to bring prosperity and security back to a nation which has been lacking both for more than 8 years now. The Obama administration was an abysmal failure, and Obama’s so-called “progressive” policies were, in reality, regressive in terms of American prestige throughout the world. We have disparaged our allies and strengthened our enemies, resulting in our enemies moving in for the kill and our allies abandoning us at this harsh time in human history. This is not to mention all of the lies this administration has told the American people, and what they have asked us to swallow as the truth. The Loretta Lynch meeting with Bill Clinton on the tarmac in Arizona days before the results of the investigation into Hillary’s e-mails being released to the public to the e-mail investigation itself and F.B.I. Director James Comey coming out and saying that Hillary was extremely careless with national security, however we are not going to press charges. All of the nonsense cooked up and served by the Obama administration really took a toll on the American people, and The People of the United States chose change, and they chose Donald J. Trump.

At this point, it appears abundantly clear that the radical left will stop at nothing to prevent anyone other than a radical leftist from taking power in the United States. This is how Hitler rose to power actually, by bullying and violently protesting all of his political competition. Yet, these radicals have the nerve to call Trump and his supporters Fascists. These people should study their history, as they only discredit themselves and make themselves look stupid by making the points they are making and doing the things they are doing. It is clear that something else is coming, and they are not going to let this be. By very definition, these people are modern fascists, which is likely why they call everyone other than themselves “fascists.”

“Fascist: a political philosophy, movement, or regime (as that of the Fascisti) that exalts a nation and often a race above the individual and that stands for a centralized autocratic government headed by a dictatorial leader, severe economic and social regimentation, and forcible suppression of opposition.” (Merriam-Webster, 2017)

Indeed, these modern fascists are not just going to roll-over and let America have their country back. These folks are becoming more violent, more volatile and more out of control with their false narratives and dangerous rhetoric, just as the Nazi Brown-Shirts did in Germany before the fascists there took power. These radical fascists see Obama and the Democratic Party as their “centralized autocratic government headed by a dictatorial leader,” and they have been committing “severe economic and social regimentation, and forcible suppression of opposition,” for years now under the Obama administration.

If it were true that Trump was put into office by efforts of Russia, then there would be little opposition to these radicals protesting a legitimate election; however that is not the case. Tens of thousands of American patriots, and Trump supporters, plan on being at the inauguration, which means there will be opposition to the madness which these radicals are trying to induce. Personally, I can only wish I was there to take part in the inauguration myself, and to see who wins the day. Of course at this point is doesn’t matter much what the radicals do on January 20th, 2017, Donald J. Trump will be sworn into the office of the President of the United States whether they like it or not.  The hard-truth is that Trump was legitimately elected, and he is your President if you live in the United States. If your desire is to protest his inauguration, one which will inaugurate and forge a secure, prosperous and free future for the United States, then you are seemingly detached from reality and have officially fallen for fascist propaganda. YOU are the reason Trump was elected, because America is tired of these fascistic radicals attempting to drive this nation into the ground!