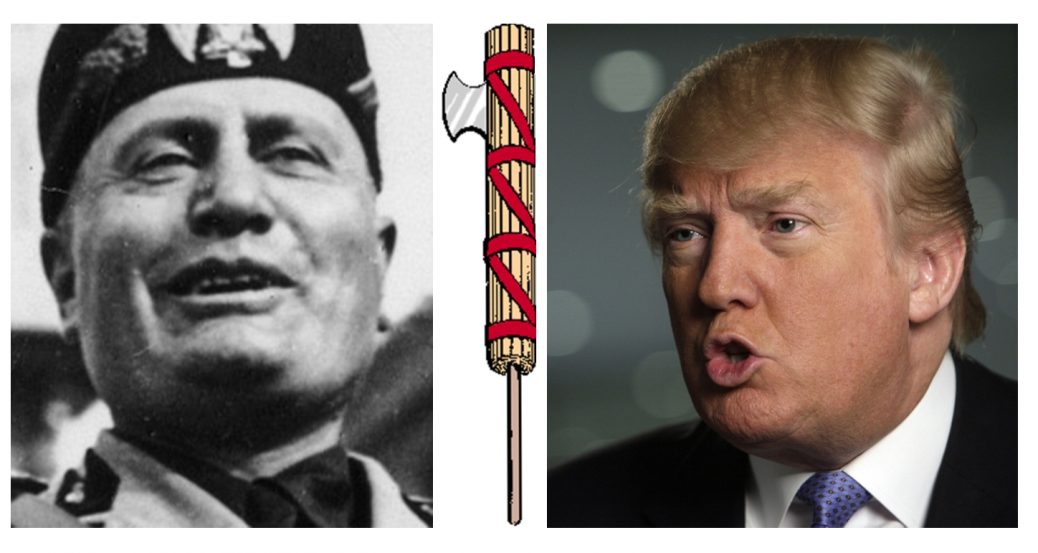 Just saw an article about how Google has redefined fascism. It made me curious so I did what I usually do when I want to know what a word means. I picked up my dictionary. It’s a 5 or 6 pound job, the Second College Edition of Webster’s New World Dictionary that I have had since my college days. I used to have fun with it and my middle son, who is a big computer aficionado. I would challenge him to a race to define a word, beginning from a sitting start in the living room. He would go to his computer and I to my Websters. Much to his chagrin, I beat him every time.

I am going to paraphrase here what i found in order to make it a smoother read and to inject some other data, but it in no way distorts what Webster’s has to say. I’ve given you the reference, you can check it yourself. The term was derived from the Roman fasce, which Merriam-Webster tells us:

Fascism is the doctrines, methods or movements of the Fascisti, a political group founded by Benito Mussolini in Italy in the 1920’s. It is a system of government characterized by rigid one-party dictatorship, forcible suppression of opposition, private economic enterprise under centralized control, belligerent nationalism, racism, and militarism, etc. What the etc. is, they don’t say.

Lately I’ve been hearing the word tossed around a lot, usually in reference to Trumps Presidency, so let’s break it down and take a look, why don’t we.

“A rigid one-party dictatorship” is not what i see. I see Democrats, Republicans, Independents, socialists—all with a voice. Trump has stated many times his willingness to sit down and talk with anyone about making this a better country. Unfortunately, several high profile Dems have said publicly that the have no intention of talking to, or working with Trump. Even though he ran as a Republican, Trump is a pragmatist, not a dogmatist or a conservative. He believes in what works best.

“Forcible suppression of opposition tags on some of the points in the previous paragraph. There has been no forcible suppression of anyone under this administration. Fighting back when you are attacked is not suppression, it is defense. The only ones this administration wants to “suppress” are terrorists and criminals. There is suppression going on, though. It is coming from the SJW’s and the antifa as they vigorously attack free speech and other liberties. They have decided that violence and intimidation are justifiable and usable tools.

“Private economic enterprise under centralized control” is the exact opposite of what Trump’s doing with his ongoing de-regulation agenda. He has stated, and I believe, that he wants to put more and more back into the private sector, i.e. we the people, and the states and curtail and possibly even shrink the federal government.

Trump obviously has a nationalism. I mean, “America First”, and all of that, but it is not a belligerency. Trump prefers to be a “non interventionist.” He said he was President of the United States, not of the world. He does not want to be the world’s policeman, but rather to act so as to stand up for the best interests of the US.

Racism has been alleged, more like screamed from the rooftops. Not once in his thirty some odd years in the public eye was Trump called racist, not until he ran for President. He has friends and advisors of all races and sexes. There are both an Asian and an African-American in his Cabinet. He also received more Black and Hispanic votes than either of the last two Republicans to run.

Militarism might seem to be the closest fit of all of this to Trump as one of his major planks in his platform was honoring and rebuilding a depleted military. He attended a military academy and has many former military persons around him. He believes in “peace through strength.” He’s even said that he’s militaristic. His comments on this are available on YouTube. You can go check it out, I’m not going to do all the work for you.

Speaking of doing the work, if you really want to learn what Trump’s philosophies and intents are, go back and listen to his inauguration speech and his “false song of globalism” speech. If you do it with open ears and an unclouded mind, you just might find out. I might even add his State of the Union speech. Good stuff!

So, to bring it all back around on the guitar, i’m sure everyone knows by now of Trump’s “covfefe” tweet and how it went viral on the internet. What you may not know is that it was added to the Urban Dictionary in almost no time. That is the wonder of the internet! But, on the down side, it is also just that quick and easy to change the definition of a word virtually before your eyes. Any and all revisionism is to be questioned, but this one is extremely potent and very deadly. Remember, Wikipedia can be easily altered, and Google has an ultra-left agenda that is not for your benefit.