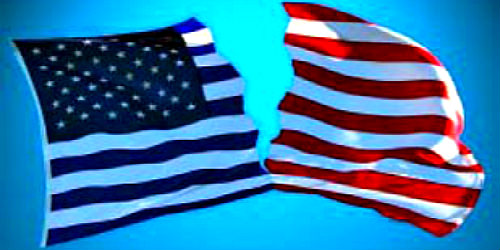 On November 27, 2016, CNN headlined an article “A Nation Divided.” US News, The Huffington Post, The New York Times, Harvard Business School, and even Psychology Today all featured articles on how divided the American people are but is this true or an effort by the media to stir things up. As a matter of fact, each of these articles acknowledged how much we agree on so many issues. As the Inauguration demonstrated, the entire nation came together in celebration of the peaceful transfer of power. Aside from a few hundred agitators who didn’t really know what they were agitating, We had a day to reflect on how lucky we are to live in this country. The next day there was a woman’s march to illustrate woman’s rights, another issue we are all in agreement with.

Every American who upholds the Constitution believes in life, liberty, and the pursuit of happiness and the broad freedom that we are afforded with that pursuit of happiness. Health being directly tied to happiness, we have pursued a federal health system that has miserably failed and collapsed under its own weight, cost way too much, and has not even come close to being universal. With that failed experiment abandoned, we are going to go in a different direction, with the goal of it being lower in cost and controlled by the individual user, which we can all agree upon.

We are a nation of immigrants, but like that boy who tried to stop the hole in the damn, we need an effective system of stopping the leaks. We have a system of immigration and guest worker programs that badly need to be overhauled and modernized, so that immigration works for us and not against us. We can all agree on this. We have been at war (undeclared, but still a war) and are literally being threatened with extinction. We can all agree that this needs a drastic change of direction and we need to be determined to win the peace. We are also being threatened by violence in our cities and agree that it is the role of government to keep the peace. The economy has stagnated for the last decade, and incentives need to be offered to increase jobs by individual businesses. In all of this, we are in agreement.

So, one wonders why the media wants to promote fake decisiveness in our country? It is time we reject anything that doesn’t bring us together, that helps us resolve our differences in a logical manner. Our education system seems to want to exaggerate these differences rather than equip us with tools to resolve conflict and promote a broad range of opinions and healthy discussion. Our political parties want to stress that we are on opposite sides of the spectrum and disagree on intents and motives rather than simply on just the means to accomplish what we all agree upon.