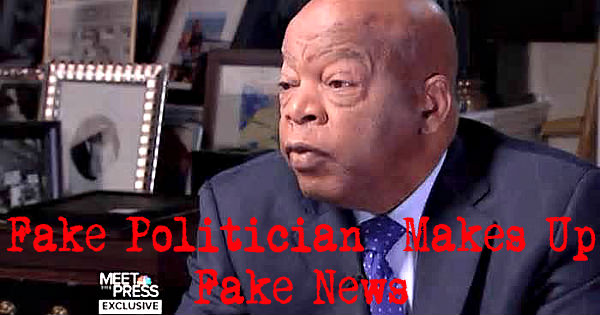 The purpose of Fake News is to provide cover for Democrat Fake Politicians and to smear anyone who opposes them. A good example is how Fake News reported Fake Politician Rep. Lewis’ exchange with President-Elect Donald Trump.

No credible evidence exists to support the illegitimate complaint that unspecified Russian actions purported to impact the recent election had any influence whatsoever on the outcome. Consequently, there is no legitimacy to Fake News and Fake Politicians who allude to Russian actions as having led to the election of Donald J. Trump.

No Democrat can even offer a plausible suggestion how a voter who originally supported Hillary Clinton might have been persuaded by something Russia did to instead vote for Donald Trump. Neither can any Democrat explain how any citizen who had not planned on voting for Donald Trump could have been persuaded by any Russian action to change their mind and vote for Donald Trump. And certainly, no Democrat can claim that Russia managed to commit vote fraud that even begins to match the routine practice of vote fraud Democrats have perfected.

In reality, Democrats are scared to death that their multi-decades-long con game with racial and ethnic minorities is about to be exposed by Donald Trump’s pledge to improve the lives of minorities trapped in urban enclaves run exclusively by Fake Politicians of the Democratic Party. As one Black activist observed, the Democratic Party is the party of the KKK, of racial strife, of the drug culture, of broken families, of no jobs, of poverty and dependency. He went on to note that Democrat Fake Politicians maintain the horrendous conditions of their constituents because they’ve honed to a fine edge the art of political corruption (lying to their constituents, election fraud, payoffs, thuggery) designed to blame their opponents for the conditions under which their constituents must live.

Fake politicians in the Democratic Party are responsible for creating the urban voter plantations on which they’ve entrapped minority constituents for years by assuring schools were inadequate, jobs were scare, drugs were plentiful, and dependency was maximized. For many decades, Democrats have had a lock on political control of every urban area in the country in which poverty, lack of good jobs, poor education, drugs, and dependency are typical of minority enclaves. Over all those decades Democrat Fake Politicians who are in power have done nothing to improve such conditions, yet somehow, Republicans are always to blame!

As an example, in Chicago, the corrupt US Department of Justice recently blamed the Chicago police for gun violence and deaths, most of which are committed by minorities whose victims are also minorities. Chicago has been under firm Democratic Party control for 86 years! Yet, because Republicans are seen as supporting law enforcement and denouncing racial pimps of the Democratic Party who use every police shooting of a minority as an opportunity to create greater racial strife, Fake News attempts to blame Republicans for the conditions of poor minorities who inhabit the Democratic Party’s voter plantations in Chicago!

When Donald Trump sees what is happening in Chicago as a variation of “organized crime” by Democratic Fake Politicians responsible for creating and nurturing conditions of poverty and dependency, he pledges to put an end to that cycle of criminal neglect.

This has Fake Politicians of the Democratic Party scared to death that Trump will succeed. Their response is to boycott Trump’s inauguration while claiming Trump was not legitimately elected.

In full support of Fake Politicians and their claims Trump’s election was “illegitimate”, the Fake News apparatus of the Democratic Party’s ministry of propaganda continues their assault on truth by diverting attention from the utter lack of any evidence that Russia had any impact whatsoever on the election outcome. Fake Politician John Lewis is lauded for his actions more than five decades ago, but given a pass for his utter inaction to help elevate the condition of his constituents.

Rep. John Lewis should be admonished for his irresponsible and unsupportable accusation that the election of Donald J. Trump was in any way “illegitimate”. Lewis’s claim is rubbish and Lewis knows it. Trump had every right to respond to Lewis’ childish remarks. Yet Fake News castigates Trump and lauds Lewis. Does a better example of both Fake News and a Fake Politician exist?

Those Democrat members of the House who are boycotting Trump’s inauguration are a symptom of the dysfunctional Democratic Party’s far Left that has been dancing around America’s problems for decades while doing nothing constructive to address them.

While the Democratic Party drifts farther to the Left, President Trump will be showing Americans how a hard-working President can move swiftly and effectively to Make America Great Again by fixing systemic problems that have plagued this nation for decades (e.g., drugs, poverty, jobs, tax code, border controls, public eduction institutions, politicized government institutions, and growing government intrusion into the lives of people and operations of private enterprise).

Democrats are desperately trying to lay a false foundation for a political recovery by making unsustainable accusations that Trump’s election was in any way “illegitimate”. This false accusation is simply a desperate flailing by a political party that is imploding under the weight of its own extremism, incompetence, and hubris.

Ironically, radical Left elements who have a stranglehold on the Democratic Party will continue to act in a manner that only serves to illustrate just how out-of-touch they are with the average American. This will ultimately lead to a disastrous mid-term election in 2018 that will further fracture the voter base of the increasingly radicalized and shrinking Democratic Party while the New Republican Party of Donald Trump will be strengthened.

Expect Fake News and Fake Politicians to support each other with fake narratives designed to obstruct every initiative of the Trump administration to Make America Great Again by improving life in America for everyone.

We owe our gratitude to those Fake Politicians who have announced they will not despoil Trump’s inauguration by their attendance.