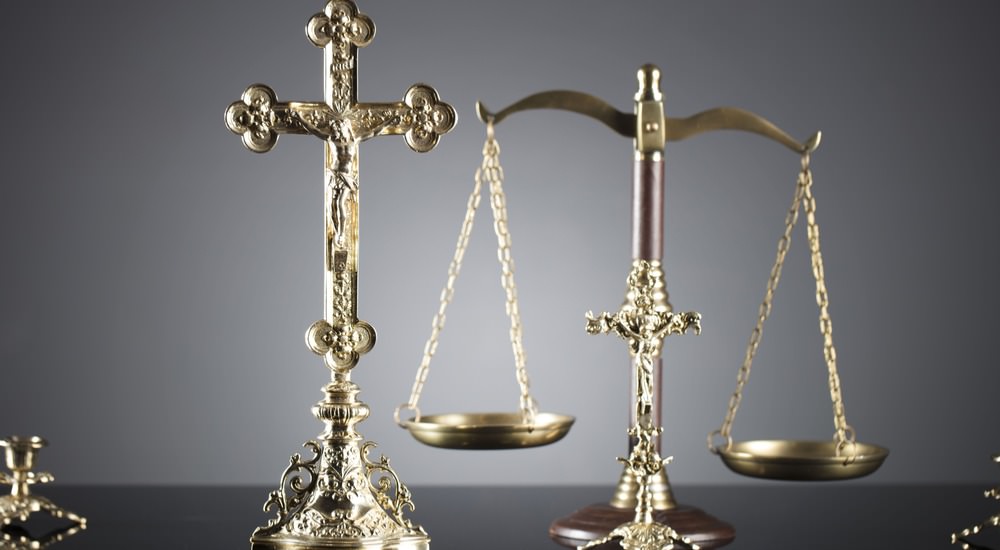 As we continue to look at the judges of the Founding era we will see that all of them promoted Christian principles within the legal system.  One Chief Justice, Thomas McKean, gave a sermon and alter call during the sentencing of a man who had been condemned to death:

Chief Justice McKean offered these words at the sentencing: “You will probably have a short time to live.  Before you launch into eternity it would behoove you to improve the time that will be allowed to you in this world. It behooves you seriously reflect on your conduct, to repent of your evil deeds.  To be incessantly in prayer to the great and merciful God to forgive your manifold transgressions and sins.  To teach you to rely on the compassion of our dear Redeemer and thereby avoid those regions of sorrow.  Those doleful shades where peace and rest can never dwell, or even hope cannot enter.  It behooves you to seek fellowship advice and prayers of pious and good men.  To be persistent at the throne of grace and the way that leads to happiness.  May you, reflecting upon these things, ensue the great will of the Father of Light and Life be received into the company and society of angels and archangels and the spirits of just men made perfect.  May you be qualified to enter into the joys of heaven, joy unspeakable and full of glory.”

No judge would have a sentence stand if he did this today.  A court case in Colorado a few years back had a sentence reversed of a man convicted of brutally clubbing a 71 year old woman to death because seven words from the Bible had been mentioned in the courtroom.1

James Iredell: Though born in England and traveled to America to be Comptroller of His Majesty’s Customs he was admitted to the American bar in 1770 and then appointed judge on the North Carolina Superior Court in 1777.  At this time America was at war with Britain and he had made his allegiance with America.  From 1779 to 1781 he was State Attorney General and in 1790 was appointed by George Washington to the Supreme Court of the United States and served until 1799.  Iredell was one of the many people during the Founding era that believed that to take an oath, even an oath of public office required a belief in God.  He stated:

According to the modern definition [1788] of an oath, it is considered a “solemn appeal to the Supreme Being for the truth of what is said by a person who believes in the existence of a Supreme Being and in a future state of rewards and punishments according to that form which would bind his conscience most.2

In debating the terms used in the Declaration of Independence ‘The Laws of Nature and of Natures God’ which was believed by the Founders to mean the laws of nature and the Divine law of the Scriptures, Iredell believed that these foundations were heavily relied upon by the framers of the Bill of Rights.3  He also made this comment about Blackstone’s Commentaries on the Laws of England :

For thirty years it [Blackstone’s Commentaries] has been the manual of almost every student of law in the United States, and its uncommon excellence has also introduced it into the libraries, and often to the favorite reading of private gentleman.4

Many believe that our Founders had no religious test for those who seek public office.  This is true, but many states did require that a belief in God and the Founders did NOT see that as a religious test.  Iredell, speaking on the subject of candidates and their religious beliefs stated:

But it is the object that the people of America may perhaps choose representatives who have no religion at all, and that pagans and Mahometans [Muslims] may be admitted into offices . . . . But it is never to be supposed that the people of America will trust their dearest rights to persons who have no religion at all, or a religion materially different from their own.5

We have seen this happen in Michigan where a Muslim was elected to Congress.  It does baffle the mind as to why Americans would elect to represent them a person from a religion that wants to take all of their rights of freedom of speech and freedom of religion away from them.

James Iredell was not ashamed of his relationship with Jesus Christ.  On that subject he stated:

For my part, I am free and ready enough to declare that I think the Christian religion is a Divine institution; and I pray to God that I may never forget the precepts of His religion or suffer the appearance of an inconsistency in my principles and practice.6

William Samuel Johnson: Johnson was one of the better educated and more active jurists of his day.  He was a Yale graduate in 1744 and Harvard in 1747; in 1761 and 1765 he was a member of the Connecticut Colonial House of Representatives; in 1765 he was a delegate to the Stamp Act Congress; in 1766 and 1771-1775 was a member of the Upper House; 1772-1774 he was also a judge on the Connecticut Supreme Court; from 1785-1787 he was a member of the Continental Congress and in 1787 he was a delegate to the Constitutional Convention and signed the Constitution;  he was the first President of Columbia College from 1787-1800; from 1789-1791 he was a United States Senator and in his later life he helped organize the Episcopal Church in America.

As president of Columbia College he set out rather strict guidelines for entrance into the college:

No candidate shall be admitted into College . . . unless he shall be able to render into English . . . the Gospels from the Greek . . . It is also expected that all students attend the public worship on Sundays.7

Many in recent years have stated that the Founders did not intend to comingle religion and education but they ignore that Washington signed the Northwest Ordinance on August 7, 17898 which encouraged that schools in the new territories to teach “religion, morality, and knowledge.” 9 They were listed in that manner because they believed that religion, i.e.

Christianity, was the most important.

John Marshall: Marshall was another of the Founding Fathers that was extremely active in the defense of America and serving his country after the War.  He had no formal education and was homeschooled by his parents; became a Minuteman and fought at the Battles of the Great Bridge in 1775; in 1777 he fought at Brandywine and Germantown; in 1780 he fought at Monmouth.  He attended William and Mary where he studied law and was admitted to the bar in 1789; became a delegate to the Virginia House of Delegates, in 1782-1795 he was a member of the Executive Council; from 1782-1788 he was a member of the House of Burgesses; in 1788 he was a delegate to Virginia State ratification of the federal Constitution; in 1797-1798 he was Commissioner to France; in 1798 he was appointed by President John Adams as Associate Justice of the U.S. Supreme Court but decline; Member of the U.S. Congress 1799-1800; under President John Adams he declined the appointment as Secretary of War but accepted the appointment of Secretary of state; served as Chief Justice of the U.S. Supreme Court from 1801-1835 where he was credited with establishing American judicial review; he was also vice-president of the American Bible Society and an officer in the American Sunday School Union.

If they [the federal government] were to make a law not warranted by any of the powers enumerated, it would be considered by the judges as an infringement of the Constitution which they are a guard. . . . They [the judges] would declare it void.10

As a Revolutionary General Marshall knew George Washington well and he was also his biographer.  He commented about Washington’s religious beliefs and it is quite different from what is taught about him today.  Marshall stated:

He [Washington] was a sincere believer in the Christian faith and a truly devout man.12

George Mason: Mason was from Virginia and educated by private tutors and his own independent study; in 1759 he became a member of the Virginia House of Burgesses; his draft of the first Virginia Constitution contained the Declaration of Rights that Jefferson used to draft the Declaration of Independence.; in 1776-1788 he was a member of the Virginia House of Delegates; though a delegate to the Constitutional Convention he refused to sign the federal Constitution because it did not abolish slavery and he also believed that it did not adequately protect the States’ rights; led the opposition in Virginia on the ratification of the federal Constitution which was largely responsible for the Bill of Rights giving him the title of  The Father of the Bill of Rights.

Because of Mason’s opposition and many others to the federal Constitution without a Bill of Rights the ratification of the Constitution almost failed in Virginia,13 New York,14 New Hapshire,15Massachusetts, 16.  In Rhode Island they would not ratify it at all without a Bill of Rights17 and North Carolina refused to ratify it until the federal government was placed under certain limitations.18

Our Founders and Mason included believed that even nations were accountable to God and enjoyed rewards or suffered punishment according to how the nation’s political behavior adhered to God’s principles.  At the Constitutional Convention Mason told the other delegates:

As nations cannot be rewarded or punished in the next world, so they must be in this world. By an inevitable chain of effects, Providence punishes national sins by national calamities. 19

As we can see with these judges both well known and obscure they all believed in a strict Constitutional approach to the law and they were all profoundly influenced by Christian principles and practiced them which is a far cry from the judges we have today.