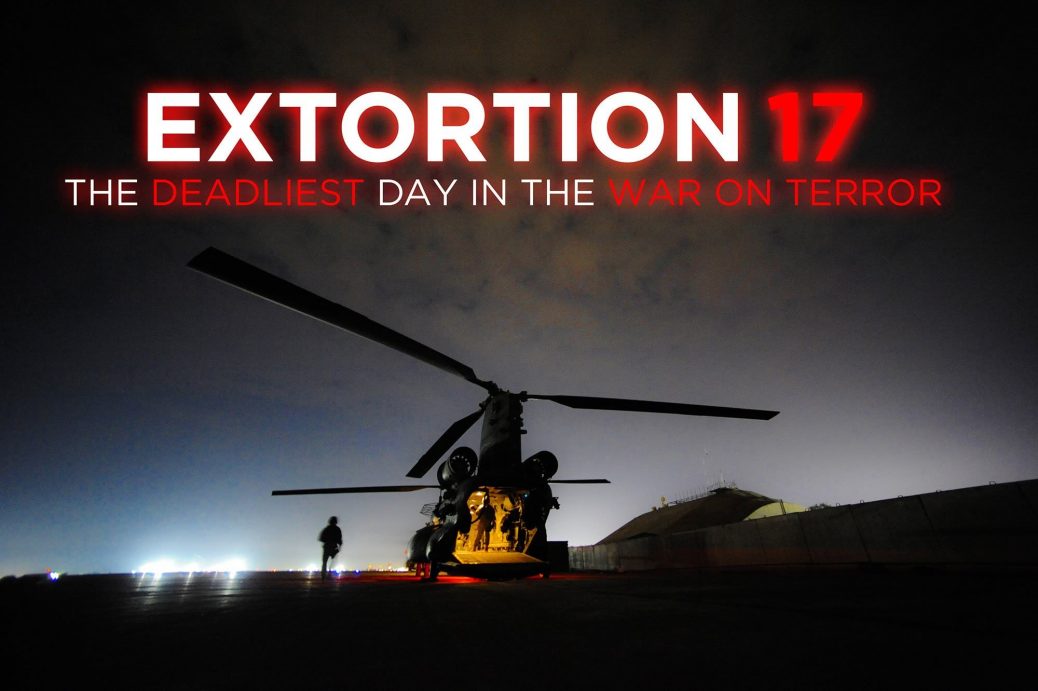 The catastrophe at the compound in Benghazi, Libya has been well documented – books, movies, etc. Needless to say, there aren’t too many Americans who aren’t familiar with attack that killed four Americans, and the subsequent cover-up. To this day, no one has been held to account. Not Obama, Hillary, Susan Rice, etc.

Yet recently we were reminded of another entirely preventable event which took the lives of 38 fighters, 30 of which were

American and 17 were U.S. Navy SEALs. The 17 included one officer and 9 senior enlisted – 7 Chiefs, 1 Senior and 1 Master Chief Petty Officer. Trust me when I say these gentlemen have been missed – not only to their loved ones, but operationally as well.

Sara Carter at Circa.com recounts the attack on Extortion 17, the August, 2011 downing of a Chinook helicopter gunship, and the greatest single day loss of Special Operations lives in American history. Mark Levin also highlighted this on his radio show the other evening.

Sara interviewed Retired Air Force Capt. Joni Marquez, who had a bird’s eye view of the whole tragic event – an event, which according to Marquez, was infinitely preventable if not for the ridiculous Rules of Engagement (ROEs) that have plagued our military from Vietnam to the present. However, under Obama, our warfighters had been particularly hamstrung.

Marquez told Carter that she was part of the aircrew of an Air Force AC-130 gunship in Afghanistan, when they received an order “to fly close-in air support above Afghanistan’s dangerous Tangi Valley, in Wardak Province, assisting troops with the Army’s 75th Ranger Regiment who were being fired on by eight heavily armed Taliban insurgents.”

By the time they arrive on scene, “the Rangers had called in for assault helicopters to engage the enemy hiding among the rocky valley.” It was thought that the helicopters gunships had taken out all eight “insurgents.” Unfortunately, this was not the case, as two survived.

“I had the sensor operators immediately shift to the eight insurgents the helicopters had taken out. Two were still alive,” Marquez said.

And this is where it all went FUBAR (look it up). Marquez, the Fire Control Officer aboard, confirmed that the two Taliban survivors were attempting to crawl away. It would have been a simple task for an AC-130 to take out these remaining scum-bags. But that was not to be.

Why not you ask? Simple – Obama era, touchy-feely ROEs. “Monitoring the scene from above, she relayed the scene to the ground force commander. ‘You have two enemy forces that are still alive,’ she said. ‘Permission to engage.’” Without explanation, “they were denied.”

Prior to this, a CH-47 Chinook helicopter, call sign Extortion 17, was called into the fight. A Chinook is a large, relatively slow moving tandem-rotor broad side of a barn – a favorite target for terrorists. While the chopper was in route, Marquez tracked the

two escaped Taliban they could have easily dispatched, back to a village, where, thanks to the stand down order, the two were able to recruit more fighters. The two now became 12.

Knowing this, Marquez and her crew put out a call to scrub the Chinook – to have it turn back. This also went unheeded. “Whenever we reached out to the Joint Operations Center, they would essentially just push back with, ‘Find a, a good infill location. Find a good helicopter landing zone,’” said Marquez.

Because of this, the dozen, now heavily armed Taliban, were afforded a clean shot with a Rocket-Propelled Grenade (RPG), which struck the chopper, sending it and the aforementioned heroes spinning out of control and slamming into the ground, killing all aboard.

Marquez says she has lived that nightmare over and over and has undergone psychological therapy because of it. And all due to Obama’s *ussy ROEs.

Circa printed some these ludicrous Rules of Engagement, designed, it seems, to give our enemies every advantage and get our men and women killed.

“No night or surprise searches. Villagers must be warned prior to searches. U.S. forces cannot engage the enemy if civilians are present – no matter what. Troops can fire at an insurgent if they catch them placing an IED, but not if they’re walking away from placing an IED. Only engage an enemy fighter if you see a weapon, and they’ve fired first.”

Are these the most asinine rules you’ve ever heard. It got so bad that an enemy could literally pick up a weapon, fire it you, place it down, and walk away. If you didn’t engage while he was firing, you couldn’t as he strolled away.

I hope and trust that president Trump has already told his commanders to cut the crap and allow our people the latitude to use their own judgment as to when to engage the enemy, without having to call Mommy or Daddy for permission. And if they do, they won’t be subject to being prosecuted as a war criminal.