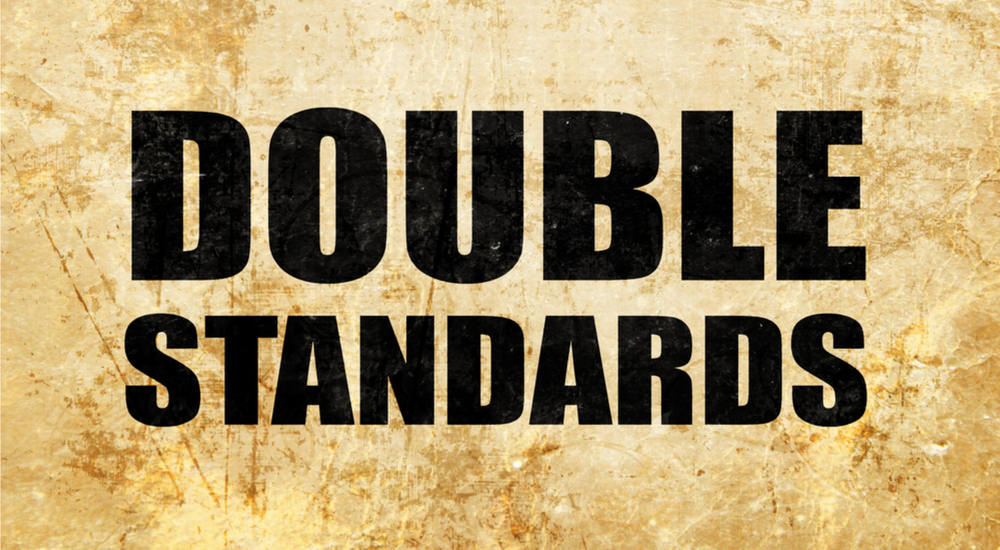 For many years I have been unable to comprehend how Liberals could have such an extreme “double standard” on practically everything. I have actually seen Liberals get furious when anyone made an unflattering reference to a liberal, like Hillary, or about a liberal policy or position. And then, the same Liberals will loudly refer to anyone who does not share their views as being racist, misogynist, homophobic, and other derogatory adjectives like the recent “white supremacist” claim by Nancy Pelosi.

As I closely followed all the political events during the 18 months prior to the November 2016 Presidential election it seemed to me that this “double standard” became a “weapon of choice” for Liberals against anyone that did not blindly share their views. And the “Main Stream Media” (MSM) always sides with the Liberals.

Here are just a few examples of the irrational Liberal “double standard”:

Eric Trump was forced to shut down his St Jude charity over public accusations of possible conflicts of interest. While he operated the charity it raised over a million dollars for St Jude with almost all the money raised going to St Jude. On the other hand the Clinton Foundation has raised around two billion dollars (no one knows for sure how much), with practically none of it going to charity. No non-partisan charity rating service has been willing to rate the Clinton Foundation. The last year anyone attempted to rate the Foundation was 2014 when it only gave 5.7 percent of the funds raised to charity, and that went to Bill Clinton’s “Global Initiative” charities! Yet Hillary stood on the stage at one of the debates and declared that 90 percent of the money raised by the Foundation went to charity, and no one called her out on it even though there have been numerous articles and books written about the Foundation, and a documentary film produced about it. All the articles, books and the film detailed how the Foundation is nothing but a “cash machine” for the Clintons, their friends and supporters. And the Clinton Foundation is still operating with no public calls for it to shut down or even be accountable.

Hillary used illegal, unsecured, private servers and ten illegal, unsecured private I phones, I pads and Blackberrys (that we know about) to conduct all her State Department and personal business while she was Secretary of State. When this first became public she held a brief press conference in front of the U.N. and said, “for convenience I elected to use just one devise for my personal and State Department communications” .In addition to the illegal server she had a Blackberry AND an I phone at that time! All this was defended by Liberals and mostly ignored by the MSM. But now the Liberals and MSM are obsessing with President Trump’s tweeting.

The Clinton’s personal net worth surged to over $200 million while she was Secretary of State with most of the money coming from questionable sources. This was defended by Liberals and mostly ignored by the MSM. But now the Liberals and MSM continue to try to tie President Trump and Rex Tillerson to “questionable” connections with Putin.

The Senate “rubber stamped” Obama’s choices for his Cabinet with nine being approved by the day Obama was sworn into his first term. .Rino McCain even publicly stated that the President should be able to have who he wanted in his administration. Now the Democrats in the Senate are doing everything they can (with some rino Republicans helping them) to slow down the confirmations of President Trump’s picks and even get some rejected. And to make this Senate confirmation process even more disgusting Cory Booker, a junior Senator for New Jersey, was allowed to speak AGAINST Senator Sessions on the Senate floor during Session’s confirmation hearing to be Attorney General. This has NEVER happened before! On an added note Booker did not meet the legal residency requirements when he ran for the Senate, but the Obama Department of Injustice ignored his questionable residency.

Obama and his staff spent the last few weeks of his time in office loudly announcing how much more stable, safer and better the world is in every way as a result of Obama’s eight years in office. And just before President Trump was sworn in the Obama Administration added to their “better world” announcement that Obama is especially proud that during his eight years in office there was not a single scandal! REALLY?  Meanwhile the Liberals and MSM continue to be obsessed with trying to find anything negative in the past of President Trump, and his cabinet choices to use to smear them. including fake news articles!

Obama pledged a smooth transition and to adhere to the “one President at a time” tradition. But he then said that he would, “stand up anytime his accomplishments were threatened”, and he and his supporters began establishing a “shadow government” in a huge mansion one mile from the White House with the express purpose of undermining everything President Trump and the Republicans try to do over the next four years.

I sincerely hoped that after the election America could return to at least a minimum level of respect for other people’s views and for everyone trying to put America FIRST. Unfortunately this is not happening. Every day now I see Liberals taking their “double standard” to new levels of irrationality. Prior to President Trump being sworn in, Liberals formed a new national movement, “Resist”, with the stated goal of doing everything possible to disrupt the Trump Presidency for the next four years. During the last few days it has become obvious that this “Resist” movement is well organized and coordinated, heavily funded and increasingly willing to use paid anarchist to turn protest into violent riots. The “Resist” goal now seems to be forcing President Trump out of office, not just disrupting his Presidency!

As I said in closing some of my recent articles, getting President Trump elected was only the beginning. We must continue to support him, his staff and the actual Conservatives who are in Washington so President Trump can continue to do what he set out to do and pledged to do. Stay informed and involved. Communicate with your elected representatives and demand changes regarding term limits, open public records, transparency in all government activities, fiscal responsibility, and reasonable performance standards for all government employees