Executive Orders: Use Them and Lose Them 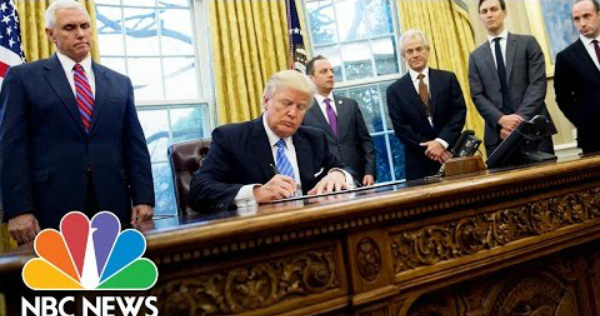 But now we have a new President in Donald Trump. Despite how dangerous executive orders can be, Trump’s only recourse to reverse Obama’s disastrous legacy is to implement executive orders of his own. Amazingly, Trump is using the pen and phone Obama left for him to reverse course and keep his promises. His orders have included reinstituting the Mexico City Policy, which bans federal funding of international abortions; withdrawal from the Trans-Pacific Partnership (TPP); imposing a hiring freeze for the federal government other than military, inevitably shrinking the government’s size; and easing the “regulatory burdens” of ObamaCare, including fiscal burdens such as taxes or penalties for individuals, health insurance companies, and others.

However, Trump’s central campaign promise was to toughen laws on illegal immigration, and to build a wall along the US-Mexico border. Yesterday, Trump signed an executive order to direct the Department of Homeland Security (DHS) to begin the process of building the promised border wall, and its construction is expected to begin this April. Trump has this power because this executive order is to enforce existing law, specifically the REAL ID Act of 2005, the Secure Fence Act of 2006, and the Consolidated Appropriations Act of 2008, requiring DHS to build “not less the 700 miles” of fencing along the southern border. While the time-frame, locations, nature of the fence (double-edged fencing or a brick wall, for example), and any length beyond the mandatory 700 miles is up to the President. The DHS Secretary, in this case John Kelly, can waive any legal requirement impeding its construction, as well.

As part of this immigration order, Trump has also increased the amount of border agents and is cutting off funding and law enforcement grants to sanctuary cities. These sanctuary cities provide a safe haven for illegal immigrants and refuse to report them to the federal government, which is akin to a city defying any other federal law—to put this in perspective, if my city decided to harbor tax evaders and hide them from law enforcement. The idea of sanctuary cities is beyond ludicrous. Cutting off funding to these cities is part of existing law and the cities and states have no legal standing to push back.

As well as the order regarding the southern wall and illegal immigration, Trump signed another order that suspends the refugee program from countries with high volatility and with high risks of terrorism, specifically Syria, Iraq, Iran, Libya, Somalia, Sudan and Yemen. The suspension will continue for 30 days, whereas afterwards the Secretaries of State and Homeland Security must submit a report to completely redo the vetting process of accepting refugees going forward, and the countries where the refugees come from have 60 days to submit information that the administration deems necessary, in order to vet the refugees and to give them visas. The refugee ban can also be extended and expanded at will.

Meanwhile, the refugee resettlement program will be suspended for four months while it is investigated and restructured to make sure that whoever is coming into the US is in danger because of religious persecution, and pose no danger to the US. However, regarding Syria specifically, the president must approve himself before the program is reinstated. These refugee orders are an enforcement of Federal law, under the Immigration and Nationality Act, giving the president the power to suspend immigration. This law applies in any circumstance at any time.

Sarah Root, Brian Terry and Kate Steinle would be proud if they were alive today.

This is a wonderful start to the Trump presidency and I expect more good things to come. However, executive orders should be a last resort, instead of a way to pass law. Legislating is Congress’s job. The President signs and enforces the laws Congress passes. If our government starts acting in the way the Constitution designed it to, executive orders could become a thing of the past.