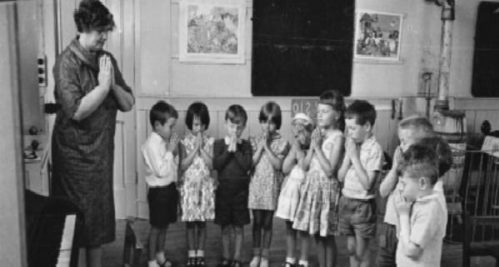 In the final chapter on education I want to look at how over the last 70 years the courts have whittled away at the Christian’s rights in schools.  We will see things that our Founders did that today’s courts find ‘unconstitutional’.  These rights that have been declared unconstitutional have taken away our ability to lay a proper foundation in our educational system.  Because we can’t talk about religion, we can no longer teach the truth about the faith of the Founders and how their Christian principles formed the very government that now declares that faith is unconstitutional.

What we have seen is the total removal of God from the schools.  There is no Bible and  no prayer and it has even gone to the point where there has been a systematic removal of any reference of religion in our text books.  When I was in elementary school in the 1950’s the Ten Commandments were displayed in almost every classroom and we said a non-denominational prayer every morning.  Today all of that is illegal.  Our Constitution is no longer taught in our schools and the faith of our Founders is actually illegal to talk about.  I have stated many times that if we forget where we came from, we will forget who we are.  We are close to that.

I have seen college graduates being asked questions about our history and they are completely clueless.  Some don’t even know who the President is today.  Some are unaware of most of our history.  The overall knowledge of history is non-existent. We have become so politically correct in our teaching that truth is very seldom told.  The exceptionalism that made America the greatest nation the world has ever seen is ignored.  Even adults that should really know better have told me that the separation of church and state is in the Constitution.

As I stated earlier, many people actually believe that the phrase ‘separation of church and state’ is either in the Constitution or in the First Amendment.  It is in neither and it is not found in any of the four founding documents: Articles of Association, Articles of Confederation, Declaration of Independence, and the Constitution of the United States.  This concept is only from recent history, within the last 65 years.  In the first 150 years of the Supreme Court’s history this idiom was only brought before the court twice.2  But since 1947 it would be hard to count the number of times this has been cited in cases presented before the Court.  In the decision by the Supreme Court it was decided that there had to be an influential separation between the church and the state even though throughout all of our history there had only been an institutional separation. The Court’s decision stated:

The First Amendment has erected a wall between church and state.  That wall must be kept high and impregnable.  We could not approve the slightest breach.3

decision, which the Court had never done in its history, and that none of the Founders ever followed that mindset. The arrogance of today’s courts in believing that they understand the meaning of our Constitution and our Bill of Rights better than those who wrote it is nothing less than pathetic.

To show how we have gone from a Christian nation able to exercise our religious freedoms to a secular nation where most religious freedoms our Founders fought and died for and practiced have become ‘illegal’ or ‘unconstitutional’, let us look at practices of the Founders and compare them to what we are allowed to do today.

Yale, when founded, required all students to live their life as directed by God’s Word. “All Scholars are required to live a religious and blameless life according to the rules of God’s Word, diligently reading the Holy Scriptures. . .and constantly attending all the duties of religion.”

Harvard was also religion orientated.  They had two motto’s: “For Christ and the Church” and “For the Glory of Christ”.  Harvard’s Directive to Students reads: “Let every student be plainly instructed and . . . consider well [that] the main end of his life and studies is to know God and Jesus, which is eternal life (John 17:3), and therefore to lay Christ in the bottom as the only foundation of all sound knowledge and learning.”

Princeton ,which was started by Presbyterians for the purpose of training ministers,   also had signers of the Declaration of Independence such as Richard Stockton and Benjamin Rush.  Graduates that were signers of the Constitution are Gunning Bedford, Jonathan Dayton, James Madison, and William Patterson.  Other prominent leaders from Princeton are Oliver Ellsworth, Chief Justice of the Supreme Court, Henry Lee, General in the Revolution and William Bradford, George Washington’s Attorney General.  The President of Princeton was John Witherspoon who was a signer of the Declaration of Independence.  Witherspoon required of each student: “Every student shall attend worship in the college hall morning and evening. . . [and] shall attend public worship on the Sabbath. . . [T]here shall be assigned to each class certain exercises for their religious instruction. . . and no student belonging to any class shall neglect them.”

The Ten Commandments were taught in all of America’s schools from 1620 until 1980.  At that time a court ruling was issued stating:

It is unconstitutional for students to see the Ten Commandments since they might read, meditate upon, respect, or obey them. Stone v. Graham, 1980;8 Ring v. Grand Forks Public School District, 1980;9 Lanner v. Wimmer, 1982.10

The Ten Commandments, despite the fact that they are the basis of civil law and are depicted in engraved stone in the U. S. Supreme Court, may not be displayed at a public courthouse.  Harvey v Cobb County, 1993.11

The New England Primer, the book used for the primary beginning textbook for all of America’s schools, public and private from 1690 until the early 1900’s, was based on Bible verses, characters, doctrines, Catechism and the Ten Commandments and even in Texas into the late 1950’s the Dallas High School had a required study course of the Old and the New Testament.  Today, however, we see a different scenario:

It is unconstitutional for a classroom library to contain books which deal with Christianity, or for a teacher to be seen with a personal copy of the Bible at school.  Roberts v. Madigan, 1990.12

Our nation has celebrated Christmas for as long as we have been a nation.  Our schools have what has always been called the Christmas break.  Government offices are closed and it has been declared a national holiday, yet in 1980 the U.S. Supreme Court issued this ruling:

It is unconstitutional for a kindergarten class to ask whose birthday is celebrated by Christmas.  Florey v. Sioux Falls School District, 1979.13

Our Founders never had a problem with prayers at schools.  When I was in elementary school we had a simple non-denominational prayer that was very similar to one that was said in the New York schools until 1962:

Almighty God, we acknowledge our dependence on Thee, and we beg Thy blessings upon us, our parents, our teachers and our Country.

But this prayer was determined to be unconstitutional and a violation of the so-called separation clause. Engel v. Vitale, 1962;14 Abington v. Schempp, 1963;15 Commissioner of Education v. School Committee of Leyden, 1971.16

The Courts also made this ruling concerning graduations or any assembly being addressed by a student:

To see how we have strayed from the original intent of education that our Founders laid out is reprehensible.  We used to have the best educated children in the world.  Our education system was second to none.  This included both the K-12 and the places of higher education.  By 1860 95% of our colleges and universities were under the direction of the church. To see these universities today you would never know that they were established by ministers. Today, most of their faculty are liberal, anti-American, anti-capitalist, and anti-religious.

There was no problem with the church being involved in the education process in the early years of America. In 1838 Congress passed a law that did two things. It required the army to have a chaplain on all army posts, forts, etc. and that chaplain would be the school master as well. By 1884 America had 370 universities and 83% were under the direction of a denomination. With the education system that we had America rose above all other nations and it is obvious that it was not a secular education system that achieved that level of academia. It was an education system that incorporated God’s Word and God’s principles into the lives of the students.  In today’s education system that centers around secular humanism the quality of education has dropped America into the double digits, 26th in the world.

We have seen which system produced the better educated, better prepared students yet we refuse to return to the better system.  The reason why?  Political correctness.  I have stated many times that if you are politically correct, then you are probably wrong.  Wrong on moral issues and wrong on just about every level and history proves it.

We are cheating our children by refusing to allow the better of the two educational systems to prevail.  How will we explain to them that we settled for a simpler more politically correct system over one that produced the brightest best educated student in the world?  I have decided that I will do all I can to return America to its greatness.  My children will not have to ask me why I didn’t do anything.