Evangelicals Have Been Led Astray by Falwell Jr. and Graham 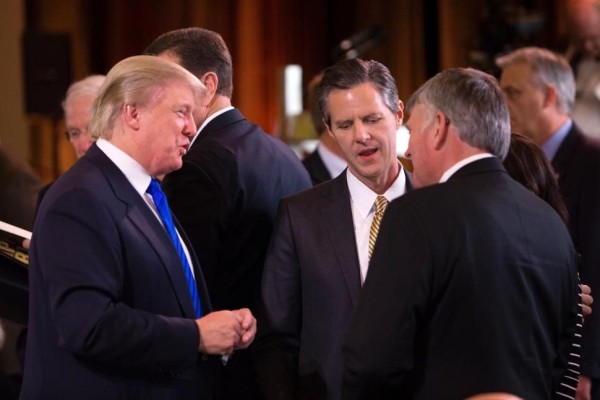 We hear Jerry Falwell Jr. support and push Donald Trump as the Country’s leader, we hear Franklin Graham prop Donald J. Trump up. The true question is: are they professing that Donald Trump is a Godly man, a leader of the disciples of Christ in this new country? Is the President not the leader of the new world, and all of the Christians within its boundaries? If you are an evangelical leader are you not supposed to bring people to Christ, his love, and His way?

Should Jerry and Graham not have propped up a godly man, a man that is keenly aware of his foibles, and his areas where he slides into sin, and ask for forgiveness? Should this Man that Evangelicals prop up “But seek first His kingdom and His righteousness, and all these things will be added to you.” – Matthew 6:33 ”, For even the Son of Man did not come to be served, but to serve, and to give His life a ransom for many.” – Mark 10:45. Can they with a Disciples heart and evangelical knowledge state that Donald has first sought the Kingdom of God?

Can Jerry Jr. with heart and soul give us a more clear understanding on when Donald J. Trump, be subject to your elders; and all of you, clothe yourselves with humility toward one another, for GOD IS OPPOSED TO THE PROUD, BUT GIVES GRACE TO THE HUMBLE. Therefore humble yourselves under the mighty hand of God, that He may exalt you at the proper time, casting all your anxiety on Him, because He cares for you. – 1 Peter 5:5-7. Did Donald Humble himself and towards all others? Does Donald use humility in his everyday life?

Graham, when did Donald actually take the time to confess his sins, ask God for forgiveness, and the strength to turn away from such sin. These sins include Gluttony, Envy, Sloth, Anger, Pride, Lust, and Greed. Today, and in the last days before the general election, we saw Envy, Sloth, Anger, Pride, Lust and Greed all propelling Donald to go very astray of God’s words. Should you not only prop up the man of Christ teachings since you are one of the evangelical teachings? Did John profess to follow sinners? Did Christ teach the masses to follow lustful, angry, prideful men?

But sanctify Christ as Lord in your hearts, always being ready to make a defense to everyone who asks you to give an account for the hope that is in you, yet with gentleness and reverence. – 1 Peter 3:15, can you Jerry Jr. or Graham, or the hundreds of other leaders of congregations who support Donald J. Trump, state with true unwavering conviction that you chose a man who portrays the ability to be gentle and reverend?

Those of you who propped Donald up are prideful, where your pride is an excessive belief in one’s own abilities, that interferes with the individual’s recognition of the grace of God. It has been called the sin from which all others arise. Pride is also known as Vanity, envy of Donald’s wealth so you are sinful in envy which is the desire for others’ traits, status, abilities, or situation. You have truly avoided guidance from the Grace of God in return for a multitude of sins that has not been reckoned with. You are truly in Sin yourself for supporting, following, and sanctifying a person who exudes the seven most deadly of sins daily. You need to fall to your knees and ask God’s forgiveness, and for his direction. You must stop with your evil ways and sinful natures.

There are two you can follow, and two that pull at us daily. Satan has fulfilled a prophecy with the battle over your souls, which in turn has led thousands away from God’s teachings. You teachers of the Word, who support the sin of Donald are nothing but false Prophets, and heretics! Whom am I to judge? 1 Samuel 2:25, Hebrews 10:26, Psalm 116:10, your fathers were Godly men, In general, none are more abandoned than the degenerate children of godly persons, when they break through restraints. Only God, his son, and the Word shall judge you, and till that day, millions of Disciples of Christ will pray for your souls. There are one of two to follow, one is of sin, Satan, one is of goodness and light, God. On which do you place your eternal soul? The deeds and sins you have displayed remind this Minister of God’s words to ask God for forgiveness for you, for you were blinded by sin, and did not know what you did…..

Jesus keeps on knocking, hoping that someone in the church will open the door. When that happens, it
sets the stage for revival and fellowship can be restored. A seat at the Lord’s table is promised when we welcome Him at ours. We can share in His glorious reign! So, let us blaze and burn for Him until He comes in the blaze of His glory. In your Church evangelicals and church teachers, are you hearing the knocks from Jesus?
Many a Godly man has been led astray by Satan, and Donald J. Trump, may you weep for their souls, and raise them up to accept God’s reverence and love once again….