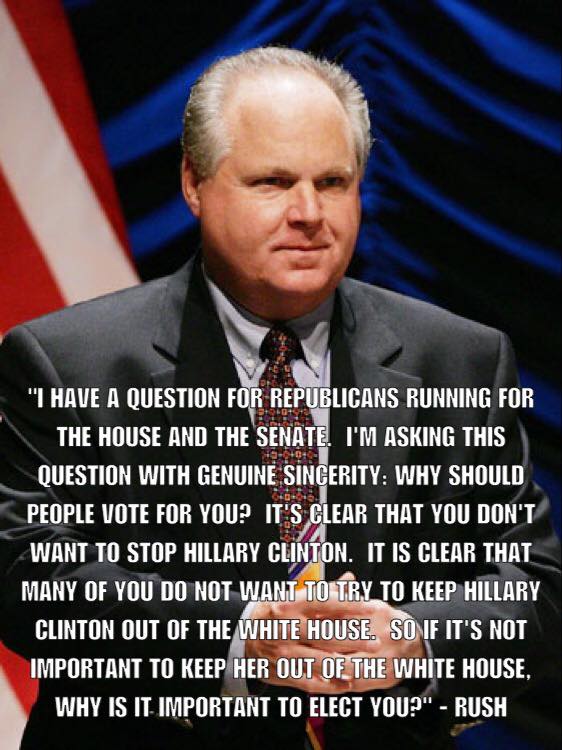 Sabotaging Donald Trump is not due to the actions of Donald Trump, it’s not due to his past, it’s not due to his character.  The Drive-by Democrat media are declaring the election over, that they have finally smeared Trump and put a hole in his steel hull to sink his hated campaign.  #NeverTrumpers have been declaring The Donald to be a Hillary shill from the start, and every time he starts overwhelming her and it looks like he’s going to actually win Democrats always strive to smear him and bring him down.  Now it’s not the Democrats or the liberal media doing it, it’s the Republican establishment.

Drive-by media – the election is over

For those who know their history, Julius Caesar was probably the most benevolent dictator to seize power over the corrupt senate of Rome.  He magnanimously let his enemies live and retain their wealth, while making plans to assist the people in living better lives.  But he was assassinated by the very people to whom he showed mercy.  Trump is no Caesar trying to seize power, while Hitlery and Sheik Obama have already done so to the point Congress may as well not exist.  But the comparison to the Washington elites standing together against an outsider who would end their cartel of corruption applies.

Ryan claims that he wants to keep Republicans in charge of Congress to stop Hillary.  They wouldn’t need to stop Hillary if Trump were president!  Why would people vote for Republicans to stop Hillary but not for Trump to keep Hillary out of the White House?  GOP elites say they will stop Hillary?  How has it worked out stopping Obama?  If Hillary gets in then she will not only have an impotent Congress if Republicans retain control, but she will have the ability to corrupt the Supreme Court for a generation.  The Bill of Rights will be no more as Democrats will replace it with their version in which government power is not restricted, but amplified.

Leftwing polls are doing their damnedest to drive public opinion rather than reflect it.  Americans would have to be the most fickle, self-righteous boobs on the planet to abandon Trump just because of this tape.  The media distraction focusing all attention on Trump to keep the public from looking at the Wikileaks dumping Hillary’s most damning emails is all this is about.  If America sinks because people are so shallow and so stupid as to allow the corrupt Clintons to gain absolute power once again then the nation deserves what she will bring – and it won’t be the prosperity the fools expect any more than it has ever been.

Trump will only lose because spineless GOP backstabbers betray the people and let the nation down.  I will vote for Trump and Republican down the ticket to stop Hillary and the corruption of Democrats.  But there will be a reckoning to root out the corruption in the Republican Party that will come!  If he loses then America loses with him.

[Author’s note: This betrayal by the Republican Party is as infuriating as Obama’s taqiya to usurp presidential power to inflict destruction on America.  Trumpsters are ready to go Incredible Hulk on Ryan & Co., grab them by the throats and smash their heads into the wall screaming , “WTF ARE YOU DOING!?!”  Ryan should be hanged right alongside Obama, along with Hillary, Reid, Pelosi, and Boehner from the balcony of the White House for their betrayal of the American people, and Congress cleaned out from top to bottom!  These bloodsuckers vote with Democrats to give themselves platinum pensions and Cadillac healthcare with the money they confiscate from us, then violate national security and American sovereignty in the name of globalism for the benefit of our enemies.  Corruption in Washington is epidemic and Trump is the ONLY choice with a chance to root it out.  We ask, “WTF is wrong with the brains of people who not only want to vote for more of it, but love it” as Democrats recreate the conditions of the 1930s and march the world toward war?

[You just can’t trust anything you hear in the media from newscasters to pollsters to commercials because they are all loaded with lies.  Democrats are posing as Republicans voting for Hillary.  It’s all a game of deception.  The only thing we can truly trust is the history we know of the candidates and their parties.  Hillary’s history is a deluge of corruption, while Trump’s history is that of a businessman who had to deal with that corruption.  It takes moral people to overcome corruption and Trump’s experience with Washington makes him eminently qualified to root it out.  If anyone doubts Trump’s honesty then just listen to him talk.  What politician would ever say, “If I don’t win I’ll consider this a tremendous waste of time and money and be very angry?”]

If Hillary wins then America as we know it will end