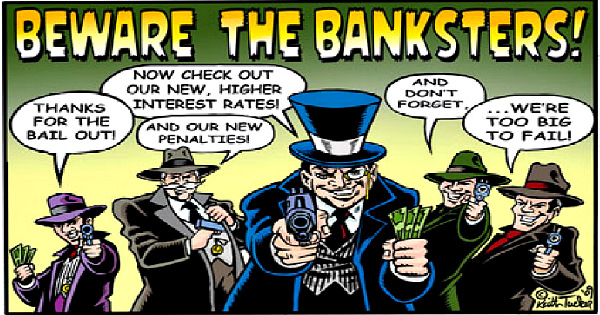 Globalist and banking frauds are one and the same. For people: Build prosperity with money made from air (primacy of debt) created with the sucker’s down payment (made from real assets he built) and backed by the sucker’s debt for which only he is responsible. Then let the suckers work the money and by so doing build their assets, buy their houses, cars, property etc. Then steal all their efforts and turn it all into poverty by moving all that individual progress labor and prosperity into the banker’s asset accounts. How? By collecting the suckers debt. (Raising the margin on the stock, commodity and money markets, the bank capitalization or reserve rate for all the local banks by order of the central bank).

For the countries, it works the same way, build up nationalism and productivity with government puppets that sell the idea that people and governments can get rich (that they and their people can prosper) with foreign money made from their own debt. Then once they get the money, the corrupt government officials can steal most of it and the rest is used to build the country for the benefit of the global usurers that get the country in debt buying weapons and fighting civil strife, criminality and external wars.

Simple, stupid plan. But because it is so big and ubiquitous, it can only be stopped if nations emit and control their own local money that cannot be exchanged for other currency. That is the real reason for the push toward globalism. The global usurers control all debt based currency that can be traded on foreign exchanges. If they had no control over the currency, people and nations would be able to trade with each other as sovereign equals. Once you have local money you have sovereign nations. Once you put the money to be exchanged with other nations, you have debt based money controlled by the globalizers — the international bankster usurers.

This concept is not at all new. Read what Ben Franklin said: Before the (revolutionary) war, the colonies sent Benjamin Franklin to England to represent their interests. Franklin was greatly surprised by the amount of poverty and high unemployment. It just didn’t make sense, England was the richest country in the world but the working class was impoverished, he wrote “The streets are covered with beggars and tramps.”

It is said that he asked his friends in England how this could be so, they replied that they had too many workers. Many believed, along with Mathus, that wars and plague were necessary to rid the country from man-power surpluses.

“We have no poor houses in the Colonies; and if we had some, there would be nobody to put in them, since there is, in the Colonies, not a single unemployed person, neither beggars nor tramps.” – Benjamin Franklin

He was asked why the working class in the colonies were so prosperous. “That is simple. In the Colonies, we issue our own paper money. It is called ‘Colonial Scrip.’ We issue it in proper proportion to make the goods and pass easily from the producers to the consumers. In this manner, creating ourselves our own paper money, we control its purchasing power and we have no interest to pay to no one.” – Benjamin Franklin

The first law was passed in 1751, and then a harsher law was passed in 1763. Franklin claimed that within one year, the colonies were filled with unemployment and beggars, just like in England, because there was not enough money to pay for the goods and work.

The money supply had been cut in half.

Franklin, was one of the chief architects of the American Independence, wrote: “The Colonies would gladly have borne the little tax on tea and other matters had it not been the poverty caused by the bad influence of the English bankers on the Parliament, which has caused in the Colonies hatred of England and the Revolutionary War.” – Benjamin Franklin

Then there is the editorial in the London Times about President Lincoln’s issuing of full legal tender Treasury notes (Greenbacks) during the Civil War, 1862-63 If this mischievous financial policy (mischievous according to the international bankers who wanted a monopoly on emitting and controlling money) which has its origin in North America, shall become endurated down to a fixture, then that Government will furnish its own money without cost. It will pay off debts and be without debt. It will have all the money necessary to carry on its commerce. The brains and wealth of all countries will go to North America. That country must be destroyed or it will destroy every monarchy on the globe.

Think about it. All we need for sovereignty and prosperity is to emit and control our own money — and let no other private party or foreign nation interfere with it.