Environmentalism is a Thin Disguise for Nazi Eugenics 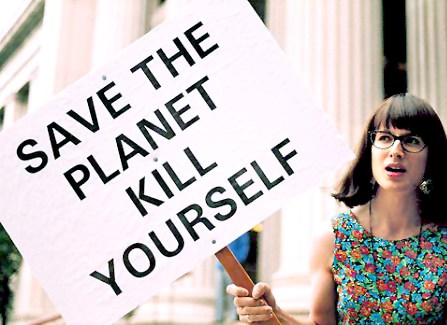 A Thin Disguise for Nazi Eugenics

California markets itself as the fun place to be. But, its radicalism is showing an ugly face more and more. The thuggery surrounding Trump’s election can be added to this state’s already far left pseudo-ideology.

One example of its dark underbelly is its position in history as the originator of modern eugenics, which is now a big part of an even darker movement called ‘environmentalism’. No, I don’t mean that branch of science that legitimately examines how the earth works. I mean the fake branch we often call ‘the Greens’, led by snake-oil salesmen like Al Gore, and the UN’s IPCC, who have badly influenced other socialists such as Obama and the EU to follow their unscientific and leftist demands. Al Gore was almost pushed out the window over his ridiculous global warming claims. He is now back with a vengeance and world leaders continue to be duped. Good ole California has a lot to answer for:

“Eugenics was the racist pseudoscience determined to wipe away all human beings deemed “unfit,” preserving only those who conformed to a Nordic stereotype. Elements of the philosophy were enshrined as national policy by forced sterilization and segregation laws, as well as marriage restrictions, enacted in twenty-seven states. In 1909, California became the third state to adopt such laws. Ultimately, eugenics practitioners coercively sterilized some 60,000 Americans, barred the marriage of thousands, forcibly segregated thousands in “colonies,” and persecuted untold numbers in ways we are just learning. Before World War II, nearly half of coercive sterilizations were done in California, and even after the war, the state accounted for a third of all such surgeries.”

Behind this anti-science ‘research’ was big money backing – similar to how socialist ideas are proliferated today and pushed through respected universities as a ‘cover’. “These academicians espoused race theory and race science, and then faked and twisted data to serve eugenics’ racist aims.” (HNN)

The Carnegie Institution established a laboratory complex on Long Island in 1904 and had millions of American names on index cards. They were used by ‘researchers’ to devise the demise of whole blood-lines and people, continually agitating amongst the social services and other authorities. Through their work people were picked out for deportation or forced sterilization, simply because of their birth. (Not like the demanded deportation of illegals and terrorists, which is legitimate).

Later, the Rockefeller Foundation funded the eugenics programme used by Hitler and his wicked doctor, Josef Menegele, who then took the ideas into Auschwitz to traumatise and kill Jews. In other words, racist scientists in California were behind the extinction of Jews in Germany.

In the 1800s, Sir Francis Galton mused about the possible effects of talented people only marrying other talented people, to produce even more talented children. His musings were then transferred to the USA and taken up by fanatical racists who tried to sell a bundle of killer theories under the guise of ‘progress’. The result was the seed found today in people who only want the ‘best’ of intellects and physique, so that everybody can be just like the theorists! It is what is behind the abortion industry, especially of babies with deformities or conditions unwanted by a ‘pure’ couple and country.

In this way the USA planned to get rid of certain bloodlines, only to be left with ‘perfect’ DNA. By segregating races, for example, it was hoped those segregated (mainly black) would simply die out. The story of this eugenic master-race madness is not over. It flourishes in the ideas pushed by Al Gore and Greens, fanatics who want the ‘weak’ and unattractive dead, so that only the ‘best’ continue to populate the earth – but in very reduced numbers.

Hitler told his close friends that he followed the American eugenic ‘research’ very closely and determined to use its conclusions in Germany. Before WW2 USA eugenicists were in contact with German eugenicists. In 1924 Hitler referred to the Californian dream of eugenically controlled populations in Mein Kampf. He even wrote a letter of high praise to eugenicist Madison Grant, telling him that his book, ‘The Passing of the Great Race’ was his ‘bible’. After that, pre-War California had strong links with Hitler’s men, who even promoted Hitler’s ideology in Californian exhibitions. Californian eugenicists were proud that Hitler was making their ideas come to life (or should we say death).

Rattle-on several decades after WW2, and eugenics is alive and well not just in the USA, but around the world. The Green movement is reliant on the deaths of millions (but not of its own members of course), and is pushed by eminent figures such as Prince Philip, and groups such as the Sahara Club and the EU.

The latest ‘research’ proves that eugenics is still viable in the minds of great men bent on the death of ‘inferiors’, and their ideas are behind many governmental policies. UK researchers, this time in the eminent halls of Oxford University, are the latest to present their ‘research’ as useful for mankind… but it will not affect the comfortable lifestyles of Oxford dons! This is because they subliminally believe themselves to be ‘chosen ones’ with the ‘right’ DNA.

Their idea (it is absurd to call it true research) is to apply a heavy tax on the world so as to reduce food intake! Come on – this is just eugenics in a more palatable but unscientific format! The reason? To combat CO2 coming from certain foods, such as meat and dairy products. This is like building a house without foundations, on thin air. CO2 is presented by these people as a threat to mankind, when, in true scientific terms, it is vital for our existence.

They say the tax will save half a million lives and prevent a billion tonnes of ‘greenhouse gases’. But, look at the figures and claims – it is all guesswork! And perhaps these scientists do not understand that there is no such thing as ‘greenhouse gases’! (See the facts in my book, ‘The Global Green Agenda’, Second Edition, 2009, Amazon). Greenhouse gases are a mere illustration gone mad, yet the notion is published in Nature Climate Change, 2016, as real.

Forget the outwardly noble claims; look at the actual facts. Many in the world, including in Europe and the USA, struggle to find money for food. A huge tax would effectively CAUSE them to die, as they contract nutrient-related conditions and illnesses. This is a policy for the rich, like the professors who pretend climate change can be altered by taxation. It is all ‘stuff and nonsense’ found readily in any socialist programme. Those with enough money will survive, and their genes will produce even better children who will cleanse the gene-pool. Recognise the talk? (Bear in mind that eugenics is based on the other fake science, evolution).

These well-off researchers think that adding a massive 40% to the cost of beef will bring down CO2, because people will eat less of it. But, CO2 is NOT a fatal element; it is essential to our well-being. And the majority of people cannot afford steaks, but only the meat products associated with processing. That is, the cheap-end of beef containing many chemicals and other bad-for-you ingredients. Poor people would love to have steak – but can’t afford it. Taxing beef like this will cause them to eat even less food – and BINGO! along comes death and illnesses, the important part of eugenic control of populations.

Don’t be fooled by these people, or by their qualifications. KNOW what they are basing their suppositions on – wild hypotheses that do not pass muster as science, or as basic human kindnesses. Trump is right to cut funding to green projects. It is about time other leaders did the same thing, or fall under the socialist steamroller and be eliminated. Crippling taxation is a key component of a socialist one world government, because it controls the people, and ‘Greens’ will resort to any number of lies and deception to further the cause of socialism, whether it is Marxian or fascist.