Engraved in Stone – Liberals Try to Tear Down 9/11 Memorial! 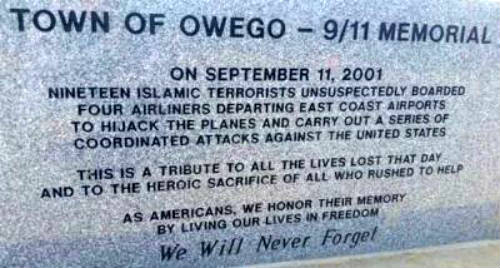 The Children of Abraham of the Southern Tier, an interfaith organization in Johnson City, has taken offense at the 9/11 memorial raised in the nearby Town of Owego, New York. This association of misguided multiculturalists and Muslim moderates allege that identifying the perpetrators of the worst individual act of aggression on American soil would encourage Muslim hatred, never once excoriating the very act that resulted in the death and injury to more than 3,000 American victims and 453 responders and boundless grief for their families and for all Americans.

Did the moderates ever attempt to apologize for the horrific crime that forced people to jump to their death rather than be burned alive? Did they express their sorrow for the victims and heroic rescue workers, or atone in a way to benefit the families that suffered such tragic loss? Do they even acknowledge that Islamic terrorists continue their march of evil, putting America and Europe on high alert for 9/11, or that this was part of Islam’s perpetual holy war against every living being on the planet. No. And the city manager’s overtures were also snubbed.

The Muslim residents of Johnson City may be moderates who never take up a lethal weapon for Allah, but they are engaging in a subtle act of civilizational or settlement jihad. Such people are comparatively discreet in Western society, going about their lives inconspicuously, but effecting regime changes in gradual increments. By their refusal to acknowledge the obvious links between Islam and 9/11, they shield those who spew hatred against America, Israel and democracy; they empower the academics and students who vilify Israel and Jewish students on campus, and they facilitate the crossing of borders for hijra (conquest by increased population). Under the guise of injured sensibilities, they insist on the removal of anything that may identify those who pursue our destruction and conquest with Islam, hoping to erase the ugly truth that fourteen centuries of barbarism continues unabated in every country where Islam is found.

They would have us believe that a tiny minority is to blame, but a recent Pew Research poll shows that 51 percent of American Muslims choose to be governed by sharia; 30% believe it is legitimate to use violence against those who insult Muhammed, the Koran, or Islam; 25 percent believe violence against Americans can be justified as part of the global jihad; and nearly 20% believe the use of violence in the US is justified in order to make sharia the law of the land. When presented with a choice when sharia conflicts with the US Constitution and Bill of Rights, 33% say sharia should be supreme. That’s some minority! Politically, 48% are Democrats, 19 percent Independents, and 19 percent Republicans.

Islam already regulates our speech through our government, our media, and the constant hazard of being damned as Islamophobic to those who dare to speak up. They cover their tracks through leftist academics, a strong BDS movement, and textbooks crammed with indoctrinal and fallacious material. Continuing along those lines, the Johnson City assemblage is working to remove from future knowledge the history of 9/11 that was carved into the granite. If we fail to yearly observe significant events as the bombing of the World Trade Center, the signing of our Declaration of Independence, our victory in World War II, and more, our youth will be robbed of their identity, their heritage, and America as we know it. Wisdom is defense. Ignorance of our journey through history is the greatest threat to our survival.

It should be noted that this interfaith group’s complaint was not that they, too, should have paid homage to America’s fallen or, specifically, to Owego’s citizen, Derek Statkevicus, who lost his life that day. Neither were they inspired to erect a monument in their own city or to join Owego residents in a fight against the greatest scourge of mankind with its unspeakable crimes done in the name of their religion. Rather, they express a phony outrage that the criminals have been identified with Islam! Often enough, other Islamic groups attempt to blame 9/11 on American citizens, on Jews or Christians, but this one is working to eliminate the obvious first, to claim that the 19 were unknown, came out of nowhere, and bombed America for no specific reason. Removing the offensive truth from the monument will leave room for revisionism later, just as Major Nidal Hassan (Fort Hood Massacre) was called anything but what he was, and his jihad massacre was officially named “workplace violence.”

Instead of condemnation or owning up to the demands for death inherent in the Koran, these individuals hope to gradually erase the event from our memory and from generations to come – just as Islamists have obliterated or renamed many artifacts and historic tombs to create their own narrative, just as their counterparts in Israel are trying to stop archaeological excavations from revealing more of Jewish history. These Children of Abraham may well be the Islamic families that escaped tyranny but, unfortunately for the rest of us, they nurture their children with intolerance and harshness, creating a new, young generation of jihadists. These offspring may become the young men enticed online to join ISIS’ executioners, or the young women lured to sexual slavery for the Palestinian cause.

We must continue to remind ourselves of the anger, the tears, and the patriotism that were triggered that day of September 11th, fifteen years ago, and realize that we are in more danger now than ever before. The Middle East has grown bolder and more violent. Islamists are acquiring newer, deadlier weapons, and more of their numbers are making their way into Europe, North and South America, bringing with them new plans to terrorize and infuse their way of life into ours. Islam has been at war with the world since the seventh century. Their holy book is a dedication to brutality and conquest, so that even their own people are condemned to grope in the darkness of oppression and poverty. In the name of their god, they must erase the past to support their own supersessionist narrative, and we must never oblige them. The more that Americans accommodate such requests and attempt to correct or crush our own speech, the more power we will hand to them. Unless we weigh the long-term ramifications of the growing adjustments we make to our lives for the sake of theirs, we will lose our freedoms to their tyrannical sharia laws.

In the words of Hassan al-Banna, creator of the Muslim Brotherhood (1929), “It is the nature of Islam to dominate, not to be dominated, to impose its laws on all nations and extend its laws to the entire planet.” If the hate feared by the Children of Abraham does arise, it will be because of Islamists’ deeds, not the attribution on a memorial stone.

Nazi Pelosi Repeatedly Violates Her Own Mask Edict; Will She Be Arrested? (Video)
Conservative Firing Line