The End of the Human Race?

This Excel spreadsheet is a comparison of the predictions of the United Nation’s World Health Organization, WHO, and the Verhulst, or Logistics equation.

Antoine Verhulst was an 18th century science teacher who observed paramecia cultures increased population to a peak, then declined to zero. He could not maintain a constant culture. He tracked them by stirring vigorously, taking a sample and counting those one drop, extrapolated to find the population. From this data he derived an equation predicting the life of a culture. With this he accurately predicted the population of the Dutch population in 1995 from 1780! His equation has been applied to other species and predicted the rise and fall accurately, but we have not seen an application to the human race. Perhaps it is not interesting politically. 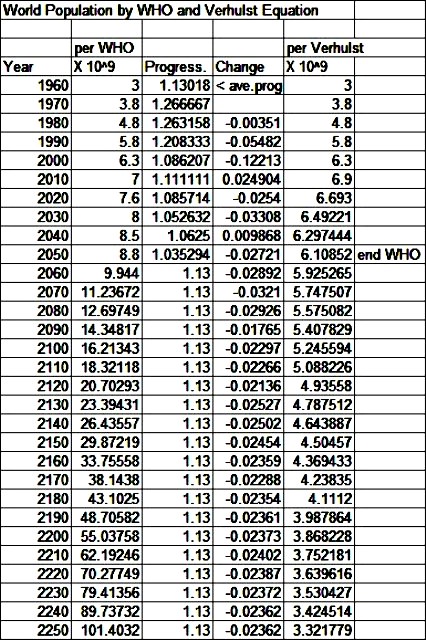 Meanwhile back at the United Nations WHO they claim the human race will expand apace so we ran their projection in the second column, “per WHO” while we ran a Verhulst prediction in column five, “per Verhust”

Nothing sells better than dystopian books and films presenting the end of the world or the end of the human race at the hands of space people, plague, CO2, ozone depletion, starvation or Donald Trump, if you live in New York, Massachusetts or California.

Meanwhile, at the National Vital Statistics System, Mortality there has been a recent release that has many people concerned: “Life expectancy for the U.S. population in 2015 was 78.8 years, a decrease of 0.1 year from 2014.

Meanwhile back at the spreadsheet: Notice at the top of column three, the progressions, labeled “Progress.”, increase from 1960 to 1970, which could be an error, but decline from that point on, per the Verhulst Principle. There is a bump up in 2010, but otherwise the trend is consistently down. We approximate the rate to go forward all the way to 2250. What does it all mean?

We trust Verhulst and the adaptability of man far more than the Paul Erclich generation of alarmist fear-mongers. The rate of population decline is now well under way in Japan, Europe and the middle class of America. We feel it is possible man will realize an equilibrium population point when science and technology are put to good use by our people. The real challenge of the future will be what to do with our abundance?