Draining the Swamp of De-Christianization! 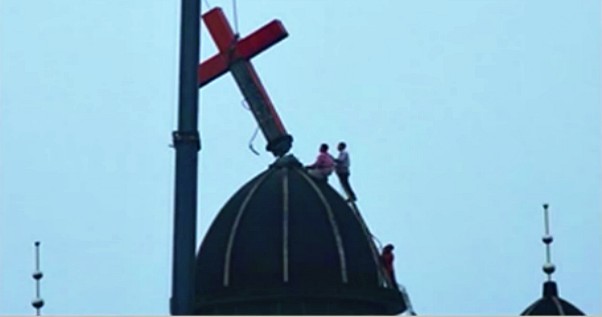 The power of the American evangelical vote swept Donald Trump into the Presidency. But how many of these voters are aware of the Swamp specialization of de-Christianizing? Indeed, the globalist spirit of the age is to de-stabilize, de-nationalize and de-Christianize. A segment of the latter treated in this article…

Let’s start from the premise in the revealing video, A Day of Shopping… for Blasphemy! (Click here!) All discussion proceeds from this. Concerned Catholics and Protestants – the true followers of Jesus and not the nominal, apostate or liberal – will want to share this article and video widely! The Trump-supporting salt of the earth need to know!

It’s easy to see this imitative principle in the market place. The overwhelming success of Starbucks many imitators attribute to occult symbols used by Starbucks. These include the Pentagram and Baphomet symbols. Needless to say, this sets the spiritual atmosphere for the ongoing displays of anti-Christian events…

It then comes as no surprise that Starbucks hires illegals, over jobless American Christian vets. It is one of many ongoing and concerted ploys to de-stabilize, de-nationalize and de-Christianize. It is Marxist multiculturalism.

Coveting the overwhelming globalist success of Starbucks, Sweet Jezus and The Burger’s Priest were quick to follow suit. Incorporating their own style of Satanism, the overt blasphemies – serious anti-Christian blasphemy – is obvious. And they are aided with Fake News cover stories and secular perceptions justifying them in the MSM.

Here’s one example of propaganda for The Burger’s Priest: “To the uninitiated, “priest” might seem like a mockery of high church ceremony. But the restaurant name is actually Protestant in inspiration, based on the idea that anyone, anywhere can bring the sacred into the mundane. He’s OK when people don’t even notice he’s not just being playful.” (Edmonton Journal)

So this “apologetic” is the first thing handy on Google to “vindicate” The Burger’s Priest. Listen.  (Smile)  “Sacred” is not bad and “mundane” is not good. Sacred is sacred and mundane is mundane.

What it actually does is simultaneously mock the sacred priest-role of the Protestants, which is clearly revealed in the video. Again, the Marxist (naturalist) MSM writer is doing fake news by putting his secular spin and world view on this deceptive situation.

Of course, the real challenge today in fighting Satanism and witchcraft is convincing dumbed-down Christians who still see secular journalists as “the narrative.”  This is the real “Project Mayhem.” (See video)

Let’s reverse the Burger’s Priest Starbucks-imitating style: If a Catholic opened up a burger chain having “fun” with Protestant terminology, bringing Luther’s “sacred” into the “mundane,” how long would that be accepted? As a Protestant, the “founder” had no business whatever using Catholic terminology, not sanctioned by any intrinsic Catholic authority.  Of course, if food chains were irreverent with Islam, endless cries of Islamophobia would rise!

What is the background of its founder? The liberal “school” he graduated from supports world-govt. advancing Soros-approved Jimmy Carter’s world-govt. “Habitat for Humanity” giving homes to Muslims in Canada… instead of to homeless American vets.  This is the spirit of his “Tyndale” college which is liberal to the core. His “Christian” background is a cover up. Liberal Christianity is a misnomer. All leftist liberalism is sin. The founder of The Burger’s Priest graduated from this “Tyndale” school which is extremely liberal… directing students into Soros-approved programs.

A President of a conservative Catholic College confirmed Burger’s Priest marketing is trash. (Yes, there are still some conservative Catholic colleges left.) But the truth is, until the Swamp is fully drained, Catholicism and Protestantism will continue to be infiltrated and de-Christianized by Marxists, Masons and overt Satanists.  De-Christianization is tireless, internally and externally, for Catholicism and Protestantism.

“Scripture from the book of John was on the wall in huge letters,” defended one uninformed Christian woman. Well, Hitler memorized 2/3 of the Bible. Satan knows it by heart. It’s sardonically on the walls of the apostate and liberal churches.

Deception is rampant and sophisticated.  Mainstream Press is scripted. We fulfill the mandate to expose Satanism and witchcraft on higher levels, informing to break through sophisticated lies and deception, all geared to profiteering Starbucks-like profits. “Let no man deceive you.”

The Satanism at Sweet Jezus is blatant. (See video) A minority of “Christian women” who are actually “witches in the pews” – wittingly or unwittingly – will defend Sweet Jesus saying things like, “I see Jesus hopping over the counter and helping them serve ice cream!” or “Their ice cream is tops!” Of course. Would Satan use anything but the Best for his recruitment program? While being irreverent of the name of Jesus?

Sweet Jezus symbols include the upside down cross, secret-society handshake, lightning bolt, coffins and much more. In terms of behavioral psychology, food is a primary positive reinforcer for incrementally conditioning behavior. Eve at the apple. Esau traded his birthright for food. What did the witch in The Lion, the Witch and the Wardrobe offer the children?  Turkish Delight.

De-programmer Ted Patrick revealed, from first-hand knowledge of Satanic cults, that murdered children, child sacrifices, are tossed in the dirt of newly-dug graves. The intended adult coffin will go on top the next day, forever concealing the murdered child’s body. This is the very same spirit of Satanism conveyed by Sweet Jezus.