A Dose of Reality for Leon Panetta 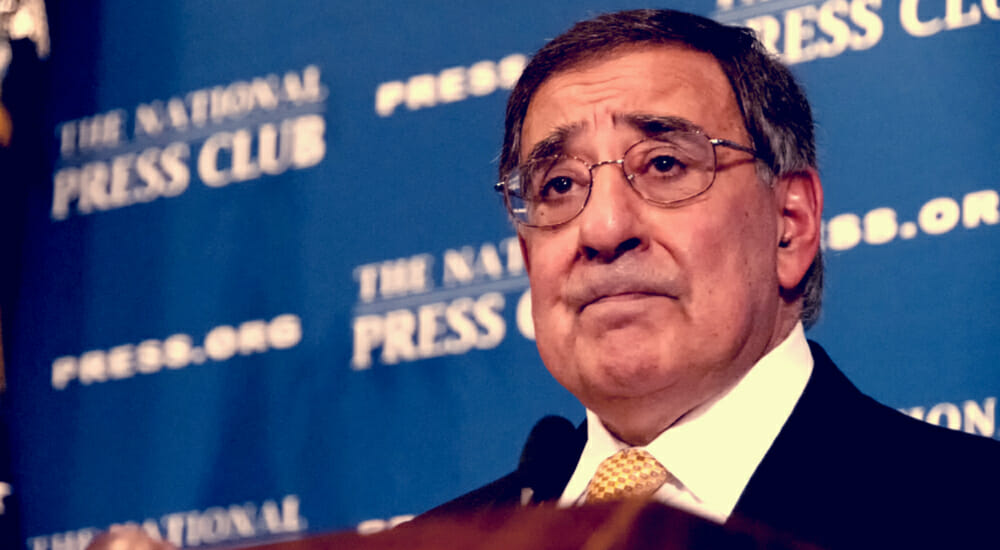 Leon Panetta demagogues the FISA memo in a display of partisan chutzpah that even Chuck Schumer would covet.

Leon Panetta feigned outrage while he deplored the unprecedented release of “the memo” after it had been declassified by President Trump. Thus Panetta joins the chorus of partisan Democrats who cannot make up their minds whether the FISA memo is a “nothingburger” or “the worst breach of national security protocol since…” well… since Hillary Rodham Clinton brazenly used nonsecure private email servers during her four years as President Obama’s Secretary of State so she could cover up her RICO violations that raked in hundreds of millions of dollars to the Clinton Foundation in exchange for Clinton granting special favors to foreign interests.

Former CIA Director Leon Panetta said that the release of a controversial memo which Republicans claim shows the FBI’s investigation into Trump officials was biased has provoked a “constitutional crisis.”

“I think the release of this memo is going to do some very serious damage, damage to the intelligence committee and the bipartisanship that is necessary in order to do oversight of classified information – damage because the president (sic) and the Congress now have a position of distrust with the Justice Department and the FBI – damage to the FISA process which has been important to our national security,” Panetta said.

“All of this sends a terrible message to our allies who are going to worry about sharing classified information that is so easily released as part of this political effort,” he added. “It’s also frankly going to encourage our enemies who will see this as a breakdown in our national security process.”

Apparently, Panetta didn’t get the message that “the memo” was a big “nothingburger”:

Would Democrats please get their lies straight?

An implicit lie in Panetta’s rant is his suggestion that somehow egregious damage would be done to national security because of the declassification of the TOP SECRET NOFORN memo. The problem with Panetta’s pompous deceit is that there is absolutely nothing in the FISA memo that is remotely worthy of even a CONFIDENTIAL classification!

Clearly, the only reason the material in the FISA memo was classified (in violation of classification guidelines) was to keep it as tightly controlled within the FBI as possible in an attempt to cover-up the illicit use of a completely unreliable “dossier” to deceive the FISC in order to illegally secure FISA warrants against anyone associated with the Trump campaign.

Irresponsible overclassification of documents during the Obama Administration was, apparently, a common tactic used to cover up illegal activity pursued by federal agencies to advance partisan political ambitions.

Evidently, Panetta is blind to the blatant widespread corruption in the FBI, the Department of Justice, the IRS, the State Department and the CIA, a level of corruption that enabled illegal warrants to be fraudulently obtained by misrepresentations to the FISC to obtain FISA warrants to spy on the Trump campaign.

Have you noticed the increasingly bizarre protests of former CIA Director John O. Brennan as the investigation draws closer to his role in this conspiracy designed to obstruct and remove President Trump in the event Hillary Clinton lost the election? Was Brennan’s role to lend credibility to the incredulous fake “dossier” making him as complicit as any other player in this gross deceit of the FISC to unlawfully spy on US citizens? Watch for future memos that will peel back every rotten layer of the unprecedented political corruption of federal agencies during the Obama administration. (see FISA Memo Released – Serious Crimes Committed – Democrat “Pivot” Has No Basis)

Make no mistake, had Clinton won, the widespread Obama-era polticial corruption of federal agencies would never have seen the light of day.

Why break the law by improperly securing an illegal FISA warrant? Because the co-conspirators were desperate to either (a) prevent Donald J. Trump from winning the 2016 Presidential election, or, (b) lay the foundation for removing President Trump from office should Hillary Clinton lose. Since all these co-conspirators were convinced Clinton would win, they believed the “downside” risk of exposure was acceptable because, had Clinton won, none of this corruption would ever be exposed!

What does Panetta think the intelligence committee should do with such damning information that, clearly, was NOT worthy of any level of classification?

To help Panetta (and any other delusional far Left Democrats) better understand the threat to our Constitutional Republic caused by the rampant criminal activity under Obama’s watch, this concise synopsis of how the Mueller “investigation” was spawned is offered:

Welcome to the swamp!

Bear in mind, there has never been a shred of evidence linking the Trump campaign to any activity of the Russian government designed to influence the 2016 presidential election in favor of either candidate. In clear violation of Department of Justice requirements, Rosenstein appointed a Special Counsel to investigate partisan allegations lacking any corroboration or evidence of an underlying crime

Does Panetta really believe clear evidence of FBI and DoJ collusion designed to affect a presidential election should be covered up? Is that the kind of FBI and DoJ activity Panetta believes should be hidden behind a TOP SECRET classification?

No fair-minded person could ever support that kind of criminal activity, even for highly partisan reasons.

Wouldn’t it have been pleasant if Panetta had spoken the truth instead of pandering to partisan politics, thus diminishing his own stature?

And no Attorney General should sit idly by while massive evidence of criminal activity and corruption is staring him in the face. If every one of the co-conspirators in this widespread criminal corruption of federal agencies is not charged, convicted and sentenced to significant jail time, these criminal activities will continue into the future with impunity!

If this unprecedented criminal corruption is not swiftly revealed and punished, it will only be a matter of time before this nation is no longer “the land of the free.”