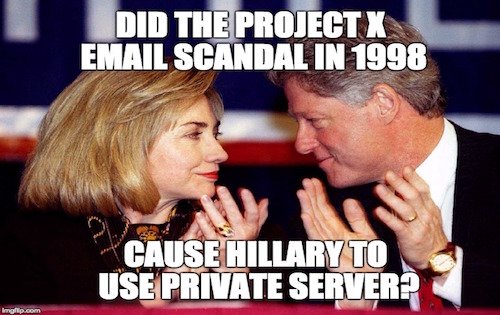 Our good friend Jeff Dunetz at the Lid just broke a shocking story that puts Hillary Clinton’s current email imbroglio into perspective for us. The truth is that this isn’t the first time the Clinton’s have had a run-in with missing emails, investigators, and conspiracy theories. The Clinton’s have been lying to us for years and we now have new confirmation that Hillary Clinton knew exactly what she was doing when she decided to set up a private email server to avoid the watchful glare of the American people.

From Jeff Dunetz at the Lid…

During Bill Clinton’s tenure in the White House a “glitch” (or person) turned off the automatic email archiving system causing the loss of of around one million emails. The missing emails just “happened” to occur at the same time as the Kenneth Starr was subpoenaing emails for the Monica Lewinsky scandal and congress was asking for emails because they were investigating the “Filegate”  scandal.  The emails lost just “happened” to be from the accounts of President Clinton and other who were being investigated in the above scandals and the people who discovered the missing emails were threatened with jail if they spoke about the missing emails.

According to the House Oversight Committee report released in Dec. 2000 the basics of the scandal:

The White House installed an Automated Records Management System (ARMS) to store all email correspondence in one central place, and make it easier to respond to document subpoenas. Due to a misconfiguration in the system, e-mail to about 500 White House officials was never recorded. E-mail was first discovered missing in January 1998, but the extent of the problem was not realized until later that year.

Top White House officials were notified in June. Despite the fact that e-mail was being subpoenaed in a number of civil and criminal cases, including the Lewinsky affair and the Filegate scandal, the White House did not notify investigators that some of it was missing…

Read the Rest of this Shocking Story at the Lid…