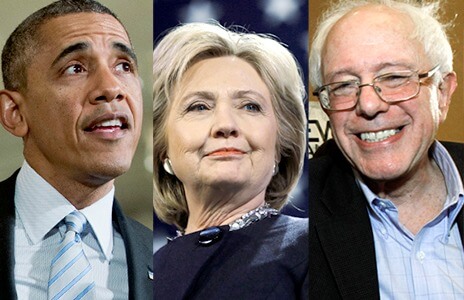 I wouldn’t vote for Bernie Sanders on a bet.

This is how dictators originally got their offices in other countries. Voted in by gullible people who wanted “free stuff,” and got a dictator. That’s how Vladimir Lenin came to power, and ruined Russia for 75 years. It’s how Adolph Hitler came to power, and he started WWII while enslaving Germany completely, and tried to “take over the world.” Saddam Hussein was voted into power and became a dictator who had his opponents thrown alive off of roofs. Many other of today’s despots began their despotism by being elected to office by people who just wanted “free stuff.” And Bernie appeals to those people because he is an ADMITTED socialist. There’s NO WAY I ever want to see this fool in the White House.

Obama is bad enough, and we may not survive HIS presidency as a free nation. He promised to “fundamentally change this nation” and he has kept that promise. He has changed it from a free market nation that is the “destination of choice” for people from all over the world who want to better themselves, to a SOCIALIST nation people will RUN away from. He hasn’t finished the job, and rumor is, he will work some sort of a scam to stay in power after Jan. 20, 2017. even if he doesn’t, electing EITHER Bernie of Hillary is tantamount to a third year of Obama. I don’t know if Trump is the answer, but he is certainly better than either Bernie or Hillary. I hope there are enough people left who are not looking for “freebies” to elect him.

Obama, Hillary, and Bernie tell us the capitalist system is wrong, and should be replaced by socialism (or some other form of collectivism), but everywhere collectivism (socialism, communism, Fascism, progressivism, etc.) has been used, it has failed. If it hasn’t collapsed completely as it has in Venezuela, it muddles along on the WELFARE paid by other socialist countries that have not yet gone “belly up.” Such as Cuba, where the average age of the cars in use there is the FIFTIES, because they can’t afford better care—except for Castro and his accomplices. The “government people” in collectivist countries always get the best available. Meanwhile, their infrastructure is crumbling, after their chief communist sponsor, Russia, collapsed.

Capitalism is used as an insult to the system of free market activity that has made this country, in about 300 years, SURPASS anything other countries that have been around for THOUSANDS of years have been able to accomplish. They can’t find ANYTHING to recommend collectivism, but they continue to promote it, because it gives them POWER. With power comes PERKS, which they covet. Such people think they’re better than the rest of us, but they’re not. If they were, they wouldn’t be promoting a system that is BASED on THEFT from the producer of new wealth, for the benefit of those who don’t, for whatever reason, produce new wealth, themselves.