Donald Trump vs. the Deep State 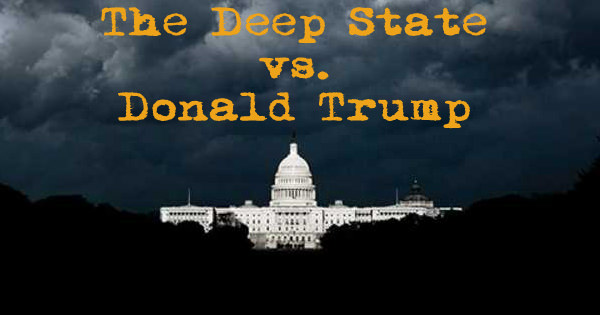 Donald Trump not only stunned the Democrat political and socialist machine by his election, but momentarily caused the New-World Order Elite to slip into disarray with an urgent need to redirect, and come back around with a redesigned game plan on their march toward a One-World government with no national sovereignty, no Judeo-Christian submission or practice, and no loyalty to tradition and heritage.

To the Elite, including those in both American political parties, Donald Trump is an enigma, someone to be tolerated until such time revised definitive plans can be brought forward in pursuit of the New-World Order.  You must come to the realization the Elite’s plan is for the United States of America to cease in existence as the sole source of power for good v evil.  Their plan has been unfolding for a number of years, but under Obama many Americans began to catch a glimpse of the magnitude and thoroughness of this diabolical scheme.   Had Hillary Clinton won, as was planned, any resemblance to the America you and I knew would have been most difficult to see except in one’s memory.  The persecution of true Christianity would have begun.  An even more radical release of humanism, witchcraft and New Age magick, coupled with anti-Semitism and anti-Gospel messages from pulpits, music and telecommunications would have proceeded with great speed.  Abortion, LGBT, all forms of sexual perversion including child abuse would have come out of the shadows leading to main stream acceptance; which, as you look around, you can see the elements of all this already quite public.  The economic engine of America would have been collapsed into its’ final death spiral, and even today America’s economy is in very serious trouble.  This is one reason you are seeing President Trump move so expeditiously to jump-start the national economy; to make strong moves with corporations getting them to remain and invest again in America and lessen the effects of a coming economic severe recession.

The election of Donald Trump as President of the United States was a miracle given the many elements spiritually and in the natural aligned against such a feat.  Mr. Trump is Adonai’s choice to provide the United States the precious gift of time, and a small but significant opportunity to establish the Remnant Church with far less hostile intrusions from agents of the State.  This miracle also created a “flash-point” with powers and principalities who, after a short period of confusion over Hillary Clinton’s defeat, regained some of their momentum and are now massing against the Trump Administration.  Working through Masonic influenced organizations, agencies, departments, and institutions and being somewhat displaced in and on the White House compound by the removal of many Islamic and Occult contact objects, the forces of darkness are swirling with strong and directed hatred spewing out against Mr. Trump and family, as well as key advisors.  The Secret or Deep State has taken steps out from their normal postures in the shadows, and have launched a myriad of political assaults with the intent to portray the Trump Administration as confused, ignorant, on uneven ground, disrespected and ridiculed unto isolation, incompetence, and ultimately insignificance and failure.  Make no mistake, what is publicly playing out in our country is a move by the adherents of the Deep State to continue their agenda toward making a New-World Order.  Make no mistake, what is occurring is NOT mere rough and tumble politics.  While the mechanisms from which this battle are playing out seem conventional the Spiritual Warfare unleashed against the United States of America is extraordinary.  While Elohim (Genesis 1:1; Psalm 19:1 – referring to God’s power and might as the only supreme and true God) granted America the precious gift of time and opportunity, Adonai has begun the separating process of sheep and goats.

In obedience to El Shad*dai (Genesis 17:1; Psalm 91:1 – God Almighty all-powerful), I send this communication to you, and then follow with materials further exposing that which I have mentioned herein.  The Lord called me to an apostolic mission, to look behind the curtain of the State, and report to the Remnant Church findings and elements from which directed and formal intercession may be redefined, as well as to Sound the Shofar of Warning to still coming assaults.  I am to remind you to begin praying faithfully for “kings and all those in positions of authority” (I Timothy 2:2); that God’s Remnant Church will be safe from persecution allowing those whom He has called-out of the church in Laodicea, and worse, to come unto Him.  Do not become complacent thinking we have much time, or we have been saved from strife.  President Trump is working diligently and aggressively to prepare for and even ward off a coming economic calamity, and a shooting war orchestrated by the Deep State.  The current protests occurring across the country are to create a distraction from the real efforts taking place behind the curtain of the Deep State.  Mr. Trump’s actions and orders already have set-off alarm bells among groups who have become addicted to the welfare state, and the opiate of government license to act without regard to the Rule of Law, our Judeo-Christian Heritage, or the values and principles from which our nation evolved.  The anarchists protesting are both paid actors, and those beginning the withdrawal process from every free manner of life and responsibility given to them by the masters of the State; addicting them into the Marxist collective utopia that sounds so appealing without regard for the consequences.  Forces of darkness masquerading as heads of state or political power brokers are working to invalidate Donald Trump as President, even beginning the whisper campaign that he is emotionally unstable and ill-equipped to handle the office to which he was elected, trying to invoke the 25th Amendment, the removal of the President.

Intercessors…more serious days are ahead than what you already have prayerfully been through.  Thank you for your service to our Lord, and to the Remnant Church.