Is Donald Trump Unstoppable? He Continues to Surge After the Debate!

Following Monday night’s debate, virtually every online poll showed Trump resoundingly beating Clinton. Critics of these unscientific polls were quick to claim that such polls are notoriously unreliable. But consider that many of these polls were conducted by Clinton-friendly websites whose visitors are not exactly a cross-section of Trump supporters.

Those poll results shouldn’t be discarded casually. They mean something.

Perhaps people were angered by Lester Holt’s over-the-edge bias toward Clinton as reflected by his interruptions of Trump 41 times as opposed to interrupting Clinton just six times. Or maybe it was Holt’s three “Candy Crowley” moments when he erroneously chided Trump for being wrong when, in fact, it was Holt’s “facts” that were in error. Perhaps it was Trump’s better answers to substantive questions in the first hour. Perhaps it was the transparent pivoting to non-substantive questions by both Holt and Clinton in the last half hour.

Evidently, Holt and the Clinton camp didn’t anticipate that their collusion would be so evident that it would bolster Trump’s claim that the debates were rigged.

We’ll never know what drove the online polls to show a huge Trump victory, but it now appears they were an accurate indicator of where scientific polls were headed.

While the Clinton camp claimed a debate victory, the people didn’t see it that way.

Today’s LA Times/USC Daybreak Poll, a daily tracking poll where each day’s numbers reflect an average of the prior week’s polling, reveals the Trump surge has continued right through the debate.

Here is a summary of today’s poll results including a look back over the history of this poll:

The graphic below shows the history and trend of Trump leading Clinton in the daybreak poll: 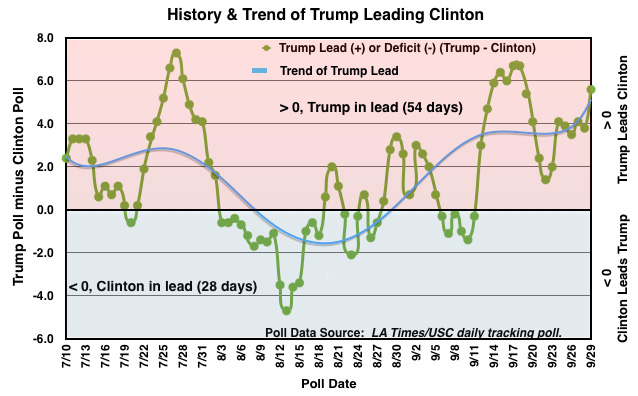 The green curve is obtained by subtracting Clinton’s poll number from Trump’s. The trend of the differences is a 6-th degree polynomial. Areas shaded in red represent Trump in the lead, those shaded in blue represent Clinton in the lead.

This graphic visually shows the greater strength and surge of Trump’s poll numbers.

Because the raw polling data collected each day is always weighted to reflect election day demographics that are based on the 2012 election. Clearly, the dynamics of that election are far different from those in 2016. Today’s dynamics (a highly successful businessman “outsider” vs. an “insider” candidate with a long history of dishonesty and corruption) strongly suggest Trump’s advantage may actually be several points greater than 2012-based weighting suggests.

This weighting problem is typical of all polls and can be used to manipulate poll results. Recall an earlier Washington Post poll that claimed Clinton held a 12% lead (51% to 39%) when, in fact the Post obtained its result by polling 12% more Democrats than Republicans, exactly the same margin as Clinton’s poll lead.

So long as Trump stays on the important messages (jobs, security, taxes, cleaning up Washington), it appears Clinton has little likelihood of overtaking a surging Trump.