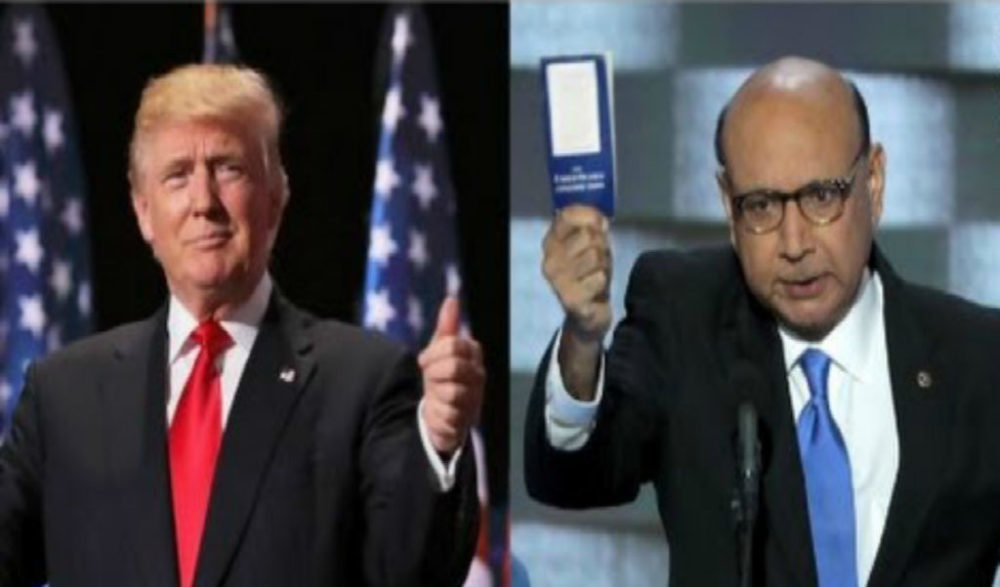 Hillary Clinton hired a Muslim with connections to The Muslim Brotherhood, to speak at the DNC Convention. He was brought there for an ingenious plot to knock Donald Trump out of the presidential race.

The speaker was Khizr Khan accompanied by his wife Ghazala who sat quietly and motionless throughout the talk. Khan appeared to be genuinely sincere as he spoke about his son, Humayun, who was in the U.S. Armed Services and was killed in action.

Pictures were shown of his gravesite at Arlington National Cemetery. He explained how his is only one of many Muslim families who love America. So far,so good.

Then, without warning, Khizi suddenly got in the saddle and  charged against Trump with the intention of lassoing him and bringing him to the ground. He accused Trump of having never sacrificed for his country and said his proposal to ban Muslims from coming to the U.S. “violated the Constitution.” NOTE: That is not true. During times of war and serious conflict, The Constitution allows that certain people can be banned from entering the U.S.  Period!

Khan accused him of being a draft dodger (he was deferred due to a medical condition) and the papers, especially Associated Press, ran with it, printing that he made derogatory comments to a Gold Star Family. The Leftist news media headlined: Trump Attacked Parents of a Fallen Soldier, Trump Showed No Respect for a Gold Star Family, Trumps Patriotism Questioned,

Now hold on there!  Trump had absolutely nothing to do with the events described on that stage. He did NOT attack the Hahns. They did all the attacking with no provocation whatsoever from Trump. They were paid by Hillary to do exactly what they did.

During an interview on Fox News, Trump was asked about why Ghazala just sat there during the speech by her husband. Trump suggested that he did not know, that maybe that is part of the Muslim faith, that the women should be silent.  That was not an accusation but more like an inquiry since, as he said clearly, he did not KNOW why she sat there silently. Yet the newspapers declared that Trump attacked Hahn’s wife.

The leftist news media is milking this for all its worth, stating that (this is the latest today) Trump may withdraw from the race. They can only wish. Still they are trying to convince the world that this is true in an effort to weaken his campaign..

It would be a slander to Obama’s reputation to not expect him to jump into this fray, stating, now get this, that “Trump is woefully unprepared and ‘unfit’ to serve as president” and urged GOP leaders to ‘withdraw their backing for his candidacy. How’s that again?It is interesting that accusers judge others according to their own standard of conduct.

The Muslims claim that The Crusades sought out Muslims in foreign lands, and tried to force them into Catholicism.  This is another lie. It was ONLY after 458 years of attacks against Christians by Muslims that FINALLY the Crusades took place. The reason for the Leonine Wall around The Vatican was to protect it against Islamic attacks. Donald Trump did NOT go on the warpath with the Hahns. He responded after their relentless attacks on him, the same as in The Crusades. Let’s get that straight.

Below is a letter to Khan by Chris Mark who puts it all into perspective:

I want to preface this letter by stating that I respect your son’s sacrifice for this great nation.  By all accounts, he is a true hero that sacrificed himself in service to our country. For that I am thankful.

As a veteran, I watched your comments at the Democratic National Convention with a mixture of sadness, and anger.  The United States has a military comprised of volunteers.

Every single member has made the conscious choice to join the military and serve.  There is not a single service member who has been forced into service.  It is important for all service members (and apparently, their families) to understand that service to this great nation does not imbue one with special privileges or rights.

I found your comments troubling when you said: “Have you ever been to Arlington cemetery? Go look at the graves of brave patriots who died defending the United States of America. You will see all faiths, genders and ethnicities. You have sacrificed nothing and no one.”

Does it matter whether Mr. Trump has sacrificed “…nothing and no one?”…has Ms. Clinton “sacrificed” for this nation?  How about Mr. Obama?   Your comment stating that Mr. Trump “…has sacrificed no one” is alarming.  Are you intimating that YOU sacrificed?  Sir, your son willingly sacrificed himself.

As a father I cannot imagine the pain you must feel but his sacrifice is his own.  He was not forced to serve.

I am troubled that you would allow a party that has little more than contempt for the US Service Member to parade you into the DNC to denounce Donald Trump.

Did you watch when protesters at the DNC booed and heckled Medal of Honor recipient  Capt. Florent Groberg? Did you notice your party interrupting the moment of silence for slain police officers?  Your own hypocrisy in not denouncing these acts and instead using the DNC as a platform to make a political point is disgraceful.

The simple fact is that whether one served or sacrificed does not give greater power to their statements.  One vote is as valuable as another.  That sir, is why our Country is great.  Your condemnation of one person for a statement while standing idly as your party disparages veterans and police officers is the height of hypocrisy.

To conflate the need to prevent potential terrorists from entering our country with the belief that ‘all Muslims’ should be banned is simply wrong and disingenuous.

As a reminder, Mr. Trump said: ” “Until we are able to determine and understand this problem and the dangerous threat it poses, our country cannot be the victims of horrendous attacks by people that believe only in Jihad, and have no sense of reason or respect for human life.”

The irony of your son’s own death at the hands of these very people in Iraq should not be ignored.  I have little doubt that your son would have recognized the need to protect our country from these very people.  In fact, he held is own troops back so that he could check on a suspicious car.  Your son understood sacrifice and how to protect “his people”…’his soldiers’….’his fellow Americans’…

As you continue to make the media circuit and bask in the glow of affection cast upon you by a party that has little regard for your son’s own sacrifice, and veterans in general, I would ask you to consider your comments and your position more closely.

US Marine and Navy Veteran.