Diversity and Affirmative Action are Crutches for Incompetence 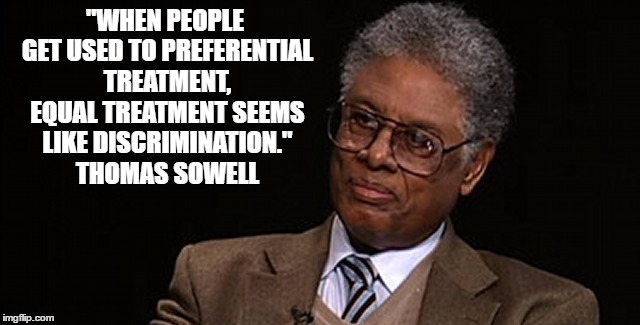 Back in the 1960’s, there was a pretty good argument for affirmative action legislation. Though slavery had been abolished for almost 100 years there was still a lot of resentment in the southern states for the price they had to pay for daring to secede from the north and of course Blacks were an easy target for that anger and frustration. Unless I’m having another Mandela Effect moment I recall a couple of old guys from the Civil War were still alive in the 60’s.  The point is, the Civil War wasn’t as long ago as some might imagine.

Affirmative Action was a recognition that, for the most part, Blacks did not have equality of opportunity in housing, secondary education, or in the economy.

It sure sounded like a good idea at the time. We’d give Blacks preferential treatment for a while so that people would get used to seeing them in roles that were uncommon at the time and of course with familiarity comes acceptance. All people are instinctively afraid of things they are unaccustomed to so it only makes sense that if we could mix the races more on every level, a familiarity would develop between the races and before long everything would be more or less equal.

However right from the start Johnsons plan to “have those niggers voting Democrat for the next 200 years?”,  didn’t turn out the way the country hoped it would. There is an old saying about giving an inch and taking a mile and programs meant to appease and aide Blacks seemed to enrage them. Some of the rhetoric went from “give us a fair shake” to “kill the White man we’re taking over.”

So where are the positive results of Affirmative Action?

Today Affirmative Action (what’s left of it) and social engineering based on diversity has become an issue of national security. Let’s be honest, there are Blacks holding jobs because of this type of social engineering that shouldn’t be holding these jobs because quite frankly they are incompetent at them. This becomes a problem when the jobs are in areas of education, firefighting, policing and a host of other jobs that are vital to the nation’s security. What appears to have occurred is that qualified people are being turned away from jobs they would thrive at and replaced by people who aren’t very good at the job.

This is hurting the nations brain trust which is why it has become an issue of national security.

Though it may sound racist the truth must be told to address the issue, there is a mental deficiency between Whites and Blacks. To be fair the exact deficiency exists between White and Hispanics and just the opposite between Whites and Orientals. There is a 30 point gap between the intelligence quotient between the average White and the average Black and that is no small difference. I.Q. test studies by race have been repeated across the globe and the results have been consistent. Even when the tests were administered in South African Universities the results remained consistent with the average I.Q. score at around 70. You don’t have to be a rocket scientist to know that 70 is a very low I.Q. score and though it is fair to say that many Blacks have much higher I.Q.s than 70, just as many Blacks have I.Q.’s much lower than 70.

This bit of information is problematic on many different levels but at the same time, it is also revealing. It is problematic because when it comes to intelligence there absolutely is scientific proof of group superiority based on race. You can almost hear Adolf Hitler laughing from the grave. However, it is also quite insightful and may be the explanation of why Blacks and Hispanics (group wise) are much more inclined towards violence to solve their problems as America’s violent criminal population in correctional facilities suggests.

So how do we deal with the science?

First of all for the sake of America’s brain and economic trusts Affirmative Action as we know it must end. We must also recognize that as a group both Blacks and Hispanics have large percentages of their populations that can barely function and we can’t just ignore these people. What we can do is stop admitting immigrant Blacks and Hispanics over Whites and Asians as the first groups take away from our nations brain and economic trusts while the second group adds to it. Frankly, America needs more Whites and Asians and our current policies towards immigration are self-destructive. If in fact, Whites do become the minority in America we will be faced with all of the same problems African and South American countries face and we are already seeing the seeds of that tree of disaster with this pro-communist movement that has engulfed the Democrat Party.

But we also have to deal with the Blacks and Hispanics who are citizens. Of course, no Black or Hispanic who is capable should be denied any opportunity to make the most of their ability whether that is in education or the workplace but what about those who are at an intelligence disadvantage? These people need to be educated at a much slower pace so they can absorb at least some of the material. If you graduate high school and can’t read proficiently that is a crime against that person. These people aren’t lazy they just don’t understand the material.

We also have to ensure that our American economy can support Blacks and Hispanics in the workplace meaning we can never give up on the manufacturing sector as our former president claimed we had. Look at the results of President Trumps focus on returning manufacturing to America for the Black community. Jobs in areas in which Blacks could compete in means the lowest unemployment among Blacks in the history of the nation.

Did you see that? Dealing with the truth and reality is how positive results occur.

The best part about these manufacturing jobs is that they don’t require an honorary degree from Harvard. These are jobs anyone could be proud of having and they are jobs Blacks and Hispanics who are beneath the global average I.Q. (100) can excel at, taking them off the handout train and putting them on the train to economic success.  The evidence is clear when manufacturing was on the decline Black employment decreased.

We can make a good life for all of our citizens but we can’t do that by living in a fantasy world. People are different and sometimes they are different by race. So what. If we know what the issues are we can address them properly as the evidence shows.