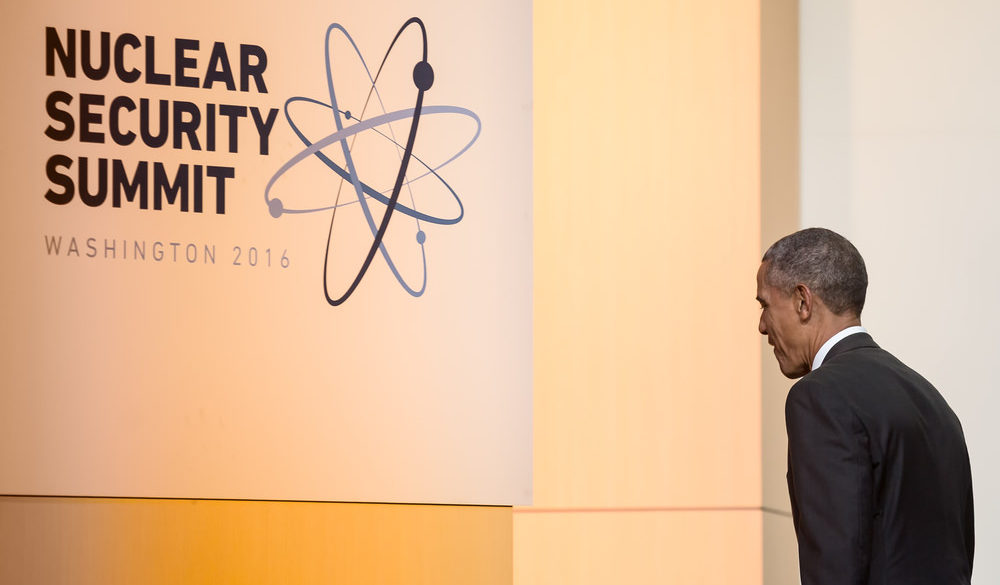 “U.S. President Barack Obama called for a world without nuclear weapons on Friday after arriving in France for a NATO summit, where he won French endorsement of his new Afghanistan strategy.”  What this means is that no nation or terrorist group will be able to have nuclear weapons so being disarmed means no one will have to worry someone won’t comply.  This is the stupidest approach to security that can be devised.  It is the story of the weak whining western woman in the old western movies that calls for the hero to hang up his guns and all will be well.  This is just before the band of vaqueros shoot up the town, tie and rape the woman and leave the disarmed hero for dead.  In the movies the hero realizes he has to strap on his gun to meet force with force and saves the day by shooting the bandits.  Now let’s look at what happens under a disarmed nuclear scenario.  By the way my book, “The Manipulators” deals with this issue in a far more dramatic fashion.

Under the nuclear disarmament fantasy nations like North Korea ( who we can’t even stop from firing a rocket) would gladly give up any nuclear ambitions and their ability to sell their nuclear materials and technology for a big thank you and check from a broke U.S. Yeah right. They have consistently broken agreements in the past so why would they suddenly decide if you don’t have nuclear arms, we won’t have them either?

Let’s suppose this pipe dream becomes a reality and supposedly there are no nuclear arms in the world.  Knowing the mentality of the dreams of world conquest or even the killing of western culture by the Islamic faction does anyone except our deluded president believe such ambitions as those expressed by Iran for example would suddenly disappear if we gave up our nuclear arsenal?  What an opportunity for those with these ambitions.  We could say, you need to show us you don’t have any nuclear weapons and they could reply, “ Take one step toward us and we’ll launch what you thought we didn’t have into the heart of your country.”  Then what will we do?  Frantically try to reinstall what we have destroyed and hope we can do it in time to deter the attack?

You cannot negotiate with a bully.  If that bully is stronger than you, you must submit.  This is the stated purpose of many fanatic Islamists.  Our President wants a world where it makes it easier for them to achieve their purpose?  Just what do we need a government for that is in the process of coddling and enabling our enemies?  Our government was created to protect our rights, not violate them. This notion of universal disarmament is vile and suicidal. We need the protection of having the latest and yes deadliest weaponry to deter the thugs of the world as they frantically try to build a cache of weapons to bully us with.

Meanwhile our politicians are worried about the American citizens that might make too much money and are oblivious of the foreign policy disasters being thrust upon the nation. Having all of Wall Street blown up by an undetected nuclear holocaust is not even mentioned in the halls of Congress but a bonus that was paid under a government contract needs unending congressional hearings?  The collectivized mush elected to protect and preserve doesn’t even realize it is violating the very oath it strove to take.

Nuclear disarmament will never be practical or moral.  Just as disarming citizens to avoid gun violence is a mistake so too is the notion of nuclear disarmament.  Here we are spending and building weapons and delivery systems with billions of dollars while our commander in chief is pandering to European wimps calling for weakness and nothing for defense to match the possible threat.  This approach of disarming and getting weaker in a world that has many factions seeking strength is so totally stupid you have to wonder why the disconnect with reality.

The answer is the ethics of altruism pounded into the heads of the gullible.  Altruism calls for sacrifice so obviously the greatest sacrifice is total oblivion.

It seems no one has caught on yet that the vision of the world’s bullies is far more benevolent by our leaders than their vision of the American citizen. The American citizen cannot be trusted to keep his own money and manage it but the foreign thugs are not only subsidized but their conquests are to be made easier by our policy of disarming.

The American people have hired President Obama to protect the nation and a policy of weakening our ability to defend the nation is counter to that purpose.  Such a policy endangers the nation.  Such a policy sets our purpose towards national weakness.  Did we fight WWII to surrender to nuclear threats?  Is that what our veterans lives were sacrificed for?  Is it not true that if we weaken our ability to fight and win, we strengthen our potential and actual enemies?  How backward and naive is this?  If this is any indication of the nonsense besides unlimited spending that we are faced with for the next four years the tea parties will have to have the impact of total rejection and reversal to the national self interest that is rightfully ours.