Congress and the President are Criminals Stealing Your Money 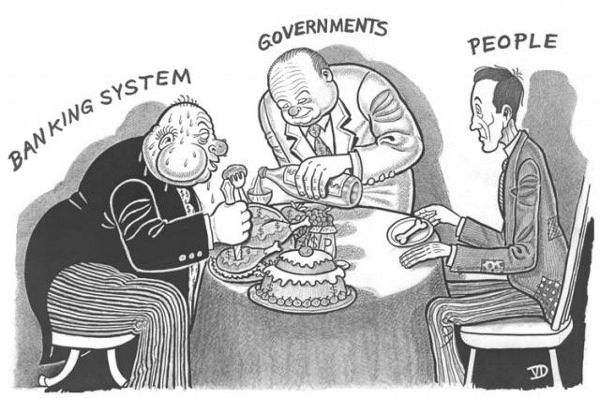 Congress and the President are arguing about how to to deal with the economy but the truth is they really have nothing to argue about.  They are both on the same fundamental page.  Both want to spend money they don’t have.

The President wants to extend his tax cuts and the Congress wants to create a spending package to “stimulate” the economy and diminish the credit fiasco by making money available for counseling and reduction of mortgage terms.  The commonality of the approach is both branches of government are relying on the printing press to “solve” their issue.

There are no mounds of taxpayer money to be returned.  A tax cut means the government will not get some money it would have, but the reality of the situation is the government has spent more money than can be supplied by the taxpayers and therefore has to turn to other means of revenue such as borrowing or printing.  This means that if the government says they are giving you a tax cut or a stimulus, what they are really doing is increasing their debt load.  A tax cut can only have meaning if the government has a surplus.  Otherwise it must increase its debt by reducing its revenue and this action is necessarily inflationary.  If the government borrows to fund a tax cut, it increases its debt load and the value of the dollar is decreased.  Why?  Because the promise to pay is less credible.  The loss of credibility in the currency is fed by the level of debt the government accumulates.  When the currency becomes so deficient in value that people turn to other means of trade such as barter or other forms of currency, as what happened during the Civil War, the country becomes bankrupt.  Its power to tax has been exhausted, its currency is unacceptable, its credit is gone and it becomes a disorganized agency of chaos.  This can be historically demonstrated since history began.

So there is really no argument about what both branches of government want to accomplish.  They both want to give the voters what they really don’t have to offer.  And what they want to give the voters is a robust economy.  They claim their methods to achieve this are different but fundamentally they both now have to rely on the printing press to cough up more fiat money.  Watching this “battle” of non-essentials is like watching two dogs fight over a bone that neither can reach.

Now lets look at how a government could legitimately grant a tax cut.  If the currency was backed by gold the problem of deficit spending would go away unless the government abandoned the gold standard which is what happened and why we have been in an ongoing inflationary trend ever since.  But suppose the gold standard was not eliminated.  Then any money the government had in its till would have a tangible value that could be checked against the market.  If the government tried to spend more than it had on hand i.e deficit spending, it would have to rely on borrowing only.  The printing press would no longer be an option.  And the more it borrowed the more debt it would accumulate.  This would require that the government demonstrate credit veracity.  If it didn’t show that it could pay money back it would not be granted any more credit.  This then would be a limited government.  Limited in scope and limited in its ability to overspend.  Private citizens live by this and governments can too if they don’t drift into the illusion that they are a special breed that can exempt reality from their lives.

Speaking of illusions the charisma of Barrack Obama is mesmerizing a large following of Democrats with the same Camelot delusions they demonstrated with JFK.  The good thing is it is showing Mrs. Clinton a reality of politics that she ignored, namely , you cannot be demanding and cranky and be popular.  Such an approach may work in a phony orientated academic environment or in an assigned environment that commands respect for occupants of an office, but in the real world where people are reasonable and expect respect the haughty will not reign. But I digress, Barrack Obama has a talent for rhetoric and is politically astute: however, his ideas are pure bunk ( so are Hillary’s ).  All the swooning by followers will not make the ideas work.  You can shout hope until the rafters ring but the rhetoric of preaching does not necessarily inspire rational behavior.  Check out the results of the Jonestown message, the Haley Comet cult, etc.  Clapping hands and chanting may move the mob but the direction of the movement is what decides the effectiveness of the leader.  Undefined change splattered with Socialism will only solidify a trend that creates more false battles in a war that is being fought by two armies trying to conquer the impossible.  The premise that with power all things are possible is a fool’s guide to failure.  The Soviet Union learned this by experience and this too will be the American destiny unless the principles of limited government are recognized and implemented.

The current pseudo battles of Congress and the President show how shallow and ineffective the arguments and results are.  The American political scene has been recreated from the last days of Rome and the premises driving the fall are ingrained, promoted and evident.  The crowd shouts from the coliseum, the mob emerges following a misguided leader, chaos reigns and the barbarians at the gate snicker at how easily the victory appears to be.

The differences being touted by the Democrats, the Republicans, the Congress and the President are really not differences in any fundamental respect.  A real difference would be a country that had a limited government where politicians could not deficit spend and promise what they know they can not deliver.  That may sound like “pie in the sky” but look at where the “reality” of today is headed and you see the absence of a limited government has produced a government spiraling out of control with a predictable chaos as the end result.

This is what real difference is all about and it is a realistic hope.  The question for the voters is, “Do you want change that makes a difference or just change for the sake of change.?”.  Or are you willing to delude yourself that there is nothing wrong that current political dogma cannot overcome?  The choice is not on the ballot  this year but the choice is possible and a real difference can happen.  And it doesn’t have to happen at the hands of a misguided mob.