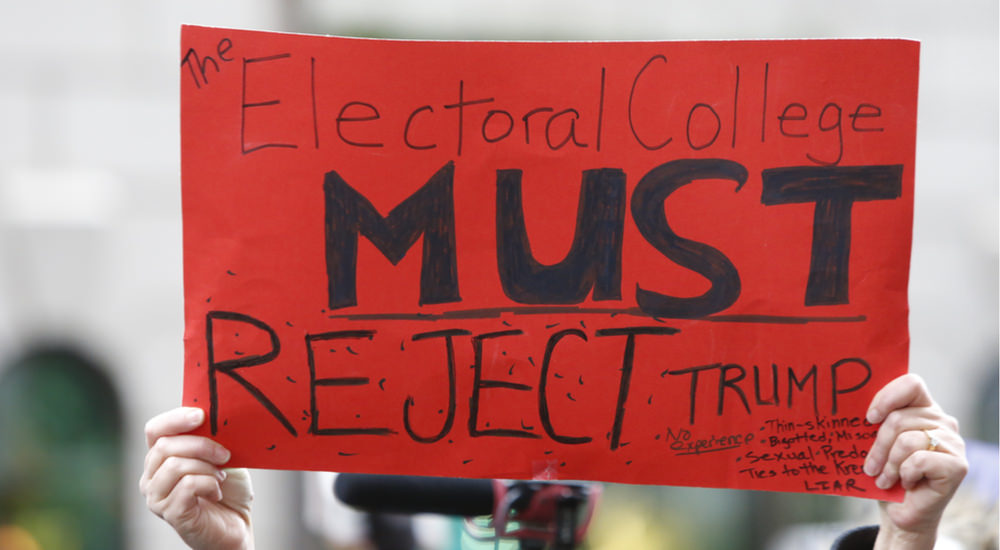 As most Americans know, in the United States we do not select our president by a direct popular vote, but rather through the electoral college, in which voting is by states. Usually this makes little practical difference. In just 4 of the 58 presidential elections since our constitution was ratified, one candidate has gotten the most popular votes but another candidate has gotten the most electoral votes and thus won the election: 1876, Hayes vs Tilden; 1888, Harrison vs Cleveland; 2000, Bush vs Gore; and now 2016, Trump vs Clinton. When this happens, Democrats complain that the electoral college is unfair and anti-democratic and should be abolished. It cerntainly is anti-Democrat if you spell “Democrat” with a big “D”: In all four cases, the electoral college gave the victory to a Republican over a Democrat.

Democrats often describe the electoral college as some bizarre and arcane thing, and say or imply that the only logical and rational way to hold an election is to give the victory to the candidate with the most popular votes. But systems like the electoral college, where people vote by a political unit rather than individually — by state in this case — are not all that unusual. You can find many other examples around the world. Let me give just three:

In all these cases, the reason for the rule is so that for a measure to pass it must have broad support across the entire country, or the world in the case of the UN. The people who established these rules didn’t want a small group of “members” (cantons, states, or nations) to impose their will on all — even if the ones imposing had a majority of the total people. The goal was to protect the rights of minorities. That is exactly the same reason why the US electoral college was established: to prevent a few large states from imposing their will on the smaller states.

Democrats routinely say that the Democrat was the “real winner” because he or she got the most popular votes. The only rational answer is to say, No, he wasn’t, because those aren’t the rules of the game.

Suppose a chess player said that he was the “real winner” of the chess match because, even though his opponent check-mated his king, he had captured more of his opponent’s pieces. Or suppose that a football coach said that his team was the “real winner” because, even though the other team got more points, his team had completed more passes. Surely we would say, But that’s not the rules of the game. You don’t get points for capturing the most chess pieces or for completing the most passes. On the things that you actually get points for, you lost. Period.

Similarly, they will often say that their candidate “would have won” if the race was decided by a pure popular vote.

Suppose a football coach said, “Our team should be declared the winner of that game. I think field goals should be worth the same number of points as touchdowns, and if they were we would have won.” This is at best hypothetical, because if those were the rules, the other team would surely not have followed the same game strategy. They would almost certainly have tried for more field goals.

Similarly, in this past election, if victory was awarded to the candidate who got the most raw popular votes, Mr Trump would surely have used a different campaign strategy. He wouldn’t have written off California early on, or spent so much time and effort campaigning in the Mid-west. I think it would have been more difficult for Mr Trump to win under such rules, but he almost certainly would have gotten more popular votes than he did if he had been working to get more popular votes rather than more electoral votes.

Really, this whole argument comes down to saying, “I should be praised and honored because I forgot the rules of the game I was playing.”