DemRats or – the Party of Molech! 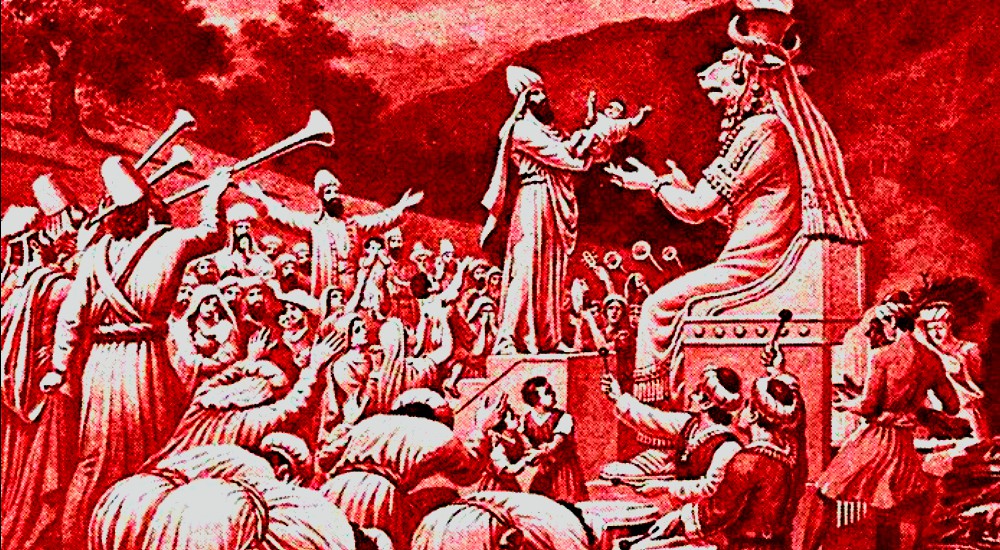 The pagan god Molech, known as the god of fire, had as his mission, according to its deluded followers,  the destruction of children, especially babies. And they would be destroyed in the cruelest possible way…being burned to death.  The DemRats of today, have the same insane mission while worshipping their god, Abortion, and dispatch developing babies who feel pain, by ripping off their limbs, one by one, then the head, as the tiny babies silently scream in agony. Again, THEY HAVE FEELINGS! Don’t forget that.

What is worse, these Demon Craps appear to DESIRE that inconvenient babies be made to suffer as much as possible while “getting them out of the way.”  After all, who wants to be tied down, restricted from their sick satisfaction by having to care for inconvenient babies?

Several years ago, medical scientists discovered that babies in the womb feel pain shortly after their heartbeat is established. Republicans tried to pass a bill that these unborn babies would be given a sedative before the dismemberment abortion was to begin, to prevent them from suffering. This is known as compassion, even though warped since this should never have been allowed to take place to begin with.

And these Dem Rat BASTARDS stood in the way of that compassionate bill being passed.  Now don’t get your knickers in a twist by the choice of a particularly descriptive word. That word is biblical and used in The Bible to question details of certain births.

And we do consider the Words of John 8:44 which must refer to Democrats: “Ye are of your father the devil, and the lusts of your father ye will do.  He was a murderer from the beginning, and abode not in the truth. When he speaketh a lie, he speaketh of his own: for he is a liar, and the father of lies.”   Yes, just like the devil who does the same as the Democrats since they are one and the same.

Nothing nails the Democrats more than this verse. They are cruel;  they lie, deceive and do evil deeds. This is why, starting today, they will be known as The Party of Molech.  All conservative journalists please take note.

Molech was the god of the Ammonites. Many of Solomons’ concubines were Ammonites. Many Israelites considered this imagined “god” a “King.” The image was made of brass, though hollow inside…exactly like the Democrats of today.

The idea of Molech, the god of fire, was for purification of the people by fire.  According to legend,  the seeds of human kinds are the best to sacrifice. In Acts 7:43, Stephen indicated that this Molach sickness was wider spread than suspected. Indeed it seems to be active right up to this present day thanks to the Democrats.

By the way, the last years that the Democrat Party was good was when John K. Kennedy was president. It was after he was assassinated that the Communists came front and center in their effort to make….”a whole new world.” Then the ultimate victory for Communist Party USA (CPUSA) when they managed to shoe-horn Obama into the Oval Office. And they ALMOST won. Except that Donald Trump came galloping in.

Recently DemRats passed a bill extending abortions up to and including birth! Yes, a baby could then go through the birth process, be out of the womb, and then murdered! This is the most savage thing yet that Demon Rats have done. Republicans immediately took action against that cruel action, but that bill to prevent babies being murdered AT BIRTH was BANNED by the dem savages that have no regard for anything or anyone but themselves and their lusts.

They are the lowest of the low.

And why tie them to Molech?  When little living babies were brought to Molech’s altar to be sacrificed by burning them alive,  there were drummers and musicians in the area playing loudly to drown out the screams of the babies and children.

This is exactly what we have today. As babies can now be legally murdered right after birth, the DemRats’ TV shows and movies, appealing to all sick lusts and fantasies, drown out the screams of the children. The exact barbaric distraction.

We cannot allow this to go on. Never, ever vote for a demoncrat again! When one looks at the strained faces of Nancy Pelosi and Alexandra OCrazy Cruz, and other demon rat faces, think rationally and never ever vote for one of them again. And let’s reopen mental state hospitals.