Democrats Sit on Their Hands and Insult the Country 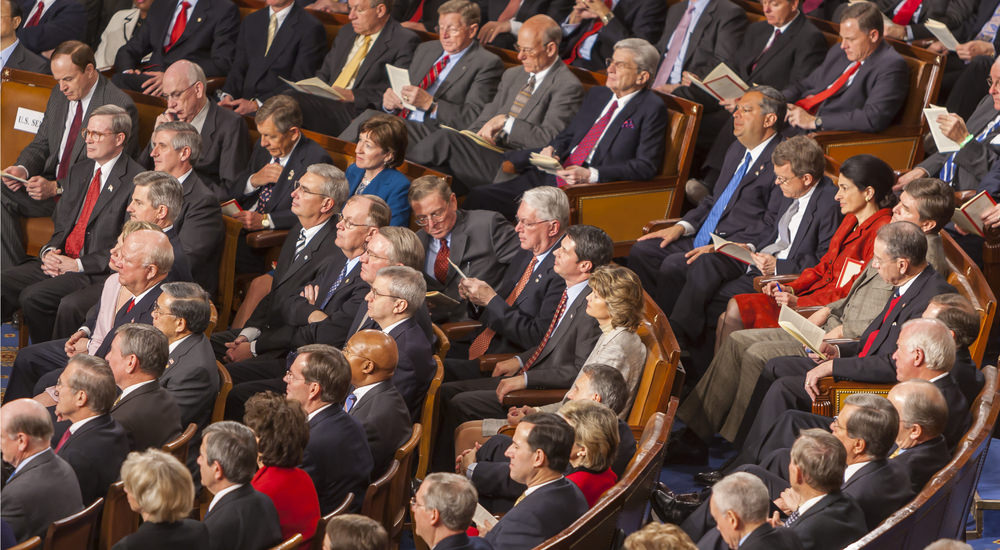 It was the most gross, disrespectful, immature defiance I have ever witnessed. Members of the Democratic Party, sitting like little children having a pouting tantrum. This was their President speaking. The current occupant of the Oval Office. A position that thousands before them have revered and followed; not the man, but the position. He was outlining his proposals for the Country; remembering those who have given their lives so that we may live in freedom, and those who protect us in our daily lives here at home.  He was not putting forth anything so outrageous that would impair our efforts as a free people trying to live together in peace and harmony. He spoke the words of a man that loves his Country; a man that hopes to bring us together, with a common purpose.

And yet, those few within our Legislative Body, sitting on the left side of this Centuries-Old Institution, could not show the respect that the position of President of the United States of America did command. They did not agree with him ideologically. He did not put forth the agenda they proposed. And yet, he did. But in their stubbornness, in their “pouting” defiance of losing a hard-fought election, there they sat; like wax figures in a museum.

He put forth common directive; one that men and women before us have fought and died for; a common desire to live in freedom and liberty, while preserving the life given us by our Founders, and a Constitution to preserve our principals. He presented his intentions and dreams for this great Country, and how he hoped to lead us on the correct path, with the consent of our Representatives. Yes, OUR representatives! The very men and women we have put there with our votes. They have divided themselves, and in so doing have divided our Country. They start by sitting on opposite sides of this great Hall. A clear sign that they wish to be divided.

Some call themselves Democrats, some Republicans, Liberals, Conservatives, and Libertarians. They seem to forget, they are ALL AMERICANS! We the people, have put them there, in a system of “checks and balances”, to protect our dreams, our Nation, and our futures. To represent US, and to ensure a future for our children; to perpetuate our Society and our ideals; not as THE leader of the World, but as the example for the World.

Those we have chosen to represent us in the Capital of our Nation, have let us down. They have lost their way. They seem to be more intent in preserving a way of life to enrich themselves with power and position. In their efforts to do so, they have left us behind. We have been ignored. Our way of life has been compromised in favor of those who seek their own personal objectives. Such objectives appear to be an extreme sense of individual power and control. While claiming to be one world of one people, they have fractured Humanity.

It appears they have a conviction of purpose to rule the entire Planet. Do they not realize this is an impossibility? They talk of common goals, of prosperity for all Societies, as long as we do what they propose, and what they provide for us in their leadership. A very intense Socialistic agenda in my view. Socialism has not prospered in other lands of our World. And it will never survive in a land of free people. We prosper within our own choices. Each community, whether it be of a different creed, a different color, a different way of life, should be left to prosper and enjoy their own lives, in their own way. But these folks on “the other side of the aisle”, would have it all go their way.

Why do they so intently criticize this man for choosing a Cabinet of so-called Billionaires? Are they not themselves mostly Millionaires? And how did they acquire this great wealth of their own? How can they expect anyone to serve their Country in this capacity and still maintain a common and economical life? While the Government (or should I say Taxpayers?) provide them with an acceptable salary, far over what the average middle-income family sees, many seem to forget that theirs is not an eight (8) hour day. They are on call twenty-four-seven (24/7). They give up much of their time for themselves, and with their loved ones. Theirs is a great personal sacrifice. Much the same as our Military, who receive a great deal less, for giving up a great deal more.

I would hope that these men and women on the “left side of the aisle”, come back down to Earth. Stop the actions of their young followers with the unwarranted protests, their violence, and their ignorance of our system. They portray those that disagree with them as an undesirable segment of Society. I would proffer that they are Society itself.

The Undesirable segment would, in my opinion, be those that parade the streets, disrupting the everyday life of those who would prefer to live under the Constitution given us by our Founders. This Document certainly did not call for such violence as these folks portray. Damaging personal property, setting fire to cars and destroying the facades of businesses owned by their neighbors. This, my friends, is not the expected actions of a freedom-loving, respectable segment of Society. These are such actions as one would expect to see by a violent, inhumane segment of our Planet. It is embarrassing to witness such behavior on our streets, and within our cities. It is extremely embarrassing to the American people for others to see the harmful behavior of these dissidents, who burn our flag in the streets, who ambush our local Police, and disrespect our Military Veterans. And yet these very same people seem to forget that the Constitution they are using and manipulating to put forth their agenda, is what is giving them the right to do so without consequences.

Perhaps it is time for our Legislative Body to correct itself. To heal their own division, and in so doing heal our Nation. Show our maturity as a people. Stop the nasty competition within our Government. Let us show the World how a truly free Nation can have competitive elections, with respect and acceptance for the outcome. Our children need to see this type of behavior. Our children need to see and understand that Freedoms and Liberties are not an expected right of passing; but that which must be earned with sacrifice, with hard work, and with diligence.

We shall no longer accept such defiance in our Society as to disrespect our Country, our Military, our Community Police, all those who sacrifice so that we may live in peace. It is time to stand up! If any wish to stay seated, then find a Park bench in surroundings that suit you, and sit there for Eternity, and see what you reap.

God Bless our Country, our Society, and all Societies that inhabit our Planet.